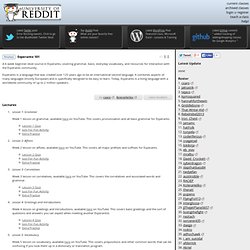 Esperanto is a language that was created over 125 years ago to be an international second language. It combines aspects of many languages (mostly European) and is specifically designed to be easy to learn. Today, Esperanto is a living language with a worldwide community of up to 2 million speakers. Lectures Prerequisites Syllabus Class Location: Class Start Date: 25 Sept. 2013 Updates: Wednesdays at 7 PM Schedule: 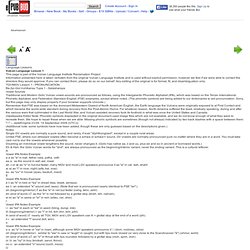 If you can contact them, please do so on our behalf. Any editing of the original is for format, fit, and disambiguation only. TGV/MGV Lesson 1 - PRONUNCIATION Ba-|Iyi-Gol-Vuhlkansu Tupa 1 - Salasharaya Vowel Sounds Traditional and Modern Golic Vulcan vowel-sounds are pronounced as follows, using the Intergalactic Phonetic Alphabet (IPA), which was based on the Terran International Phonetic Alphabet, and Federation Standard English (FSE) examples, except where noted.

(Geekipedia Editor Note: Phonetic symbols displayted in the original document used image files which are not available, and we do not know enough of what they were to recreate them. Notes Vowel IPA Notes Example. Learn Elvish. (a little bit of philosophy) So, you made up your mind to learn Elvish? 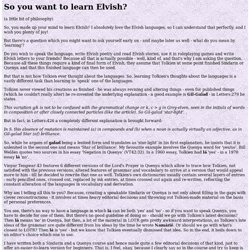 I absolutely love the Elvish languages, so I can understand that perfectly, and I wish you plenty of joy! But there's a question which you might want to ask yourself early on - and maybe later as well - what do you mean by 'learning'? Do you wish to speak the language, write Elvish poetry and read Elvish stories, use it in roleplaying games and write Elvish letters to your friends? Because all that is actually possible - well, kind of, and that's why I am asking the question. But that is not how Tolkien ever thought about the languages. Tolkien never viewed his creations as finished - he was always revising and altering things - even for published things (which he couldn't really alter) he re-invented the underlying explanation - a good example is Gil-Galad - in Letters:279 he states. List of constructed languages. List of constructed languages By Wikipedia, the free encyclopedia, Become a member of TranslationDirectory.com at just 6 EUR/ m onth (paid per year) Advertisements: This list of constructed languages is in alphabetical order, and divided into auxiliary , engineered , and artistic (including fictional) languages , and their respective subgenres. 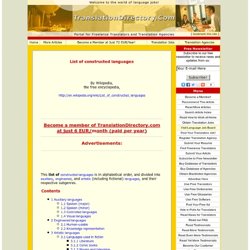 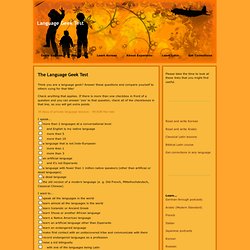 Answer these questions and compare yourself to others vying for that title! Check anything that applies. If there is more than one checkbox in front of a question and you can answer 'yes' to that question, check all of the checkboxes in that line, as you will get extra points. 30 days of private language lessons - 49 EUR flat rate Hit "Submit" to see your score. Amazon.com Amazon.de Amazon.at The Language Geek Test is copyright by Learnlangs.com. Learn Na'vi. Ancient Language - Inheriwiki - Inheritance, Eragon, Eldest, Brisingr. The Ancient Language was once a language of all beings in Alagaësia, but was later used only by the elves and some humans, along with the dwarves with one moment being the crowning of their king. 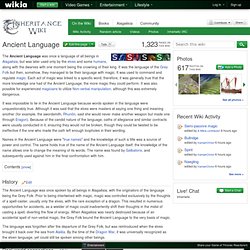 It was the language of the Grey Folk but then, somehow, they managed to tie their language with magic. It was used to command and regulate magic. Each act of magic was linked to a specific word; therefore, it was generally true that the more knowledge one had of the Ancient Language, the more magic they could perform. 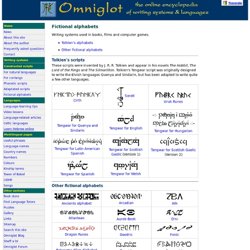 Tolkien's scripts These scripts were invented by J. R. R. Tolkien and appear in his novels The Hobbit , The Lord of the Rings and The Silmarillion . About the Klingon Language. Here you can find information about the sound and look of Klingon, and even learn a few useful phrases in the Warrior's Tongue. 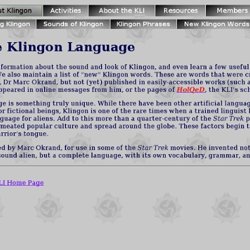 We also maintain a list of "new" Klingon words. Lojban. Learning another language for geeks and gamers. Learning a second language is something I think everyone should do. 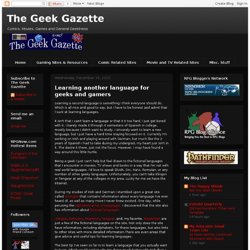 Which is all nice and good to say, but I have to be honest and admit that I suck at learning languages. It isn't that I can't learn a language or that it it too hard, I just get bored with it. I barely made it through 4 semesters of Spanish in college, mostly because I didn't want to study. I sincerely want to learn a new language, but I just have a hard time staying focused on it. Currently I'm working on Irish and playing around with German, but much like the 2 years of Spanish I had to take during my undergrad, my heart just isn't in it.