Top politician says Australia was invaded. Future - Why are people so incredibly gullible? If you ever need proof of human gullibility, cast your mind back to the attack of the flesh-eating bananas. 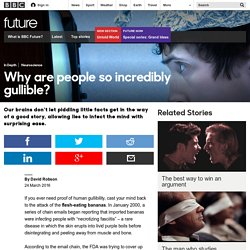 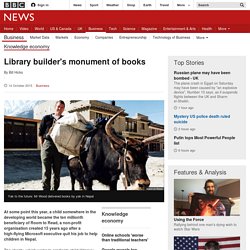 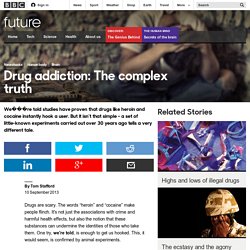 The words “heroin” and “cocaine” make people flinch. It's not just the associations with crime and harmful health effects, but also the notion that these substances can undermine the identities of those who take them. One try, we're told, is enough to get us hooked. Critical thinking in the EAP classroom. Developing critical thinking skills with Dr Sara Hannam At the centre of the learning philosophy in many English speaking universities is the idea that academic thinking requires balanced judgement reached through exploring multiple points of view. 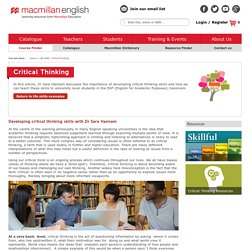 It is believed that a simplistic right/wrong approach is limiting and listening to alternatives is likely to lead to a better outcome. This more complex way of considering issues is often referred to as critical thinking, a term that is used widely in further and higher education. There are many different interpretations of what this may mean but a useful definition is the idea of looking at issues from a number of perspectives. Using our critical mind is an ongoing process which continues throughout our lives. At a very basic level, critical thinking is the act of questioning information by asking where it comes from, who has said/written it, what their motivation was for doing so and what world view it represents. Teaching ideas. Humanities research is groundbreaking, life-changing… and ignored. 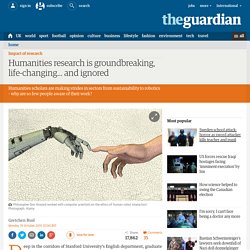 Her soon-to-be published research landed her a top job with Apple iBooks and may revolutionise the publishing industry. At the University of Notre Dame, philosopher Don Howard worked with a computer scientist to develop a code of ethics for “human-robot interaction” that could change the way Silicon Valley designs robots. Both scholars share an academic background in humanities. And they join countless others working in fields such as technology, environmental sustainability and even infectious disease control.

The Spoken History of a Global Language. Culture - To return or not: Who should own indigenous art? The British Museum in London is opening a major new exhibition with a rather interesting subtitle. 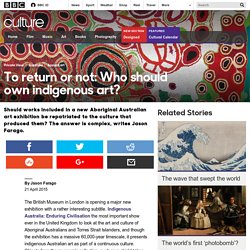 Indigenous Australia: Enduring Civilisation the most important show ever in the United Kingdom to look at the art and culture of Aboriginal Australians and Torres Strait Islanders, and though the exhibition has a massive 60,000-year timescale, it presents indigenous Australian art as part of a continuous culture. Objects from the museum’s collection, such as a shield taken by Captain Cook from Botany Bay – now the site of Sydney’s airport – will be displaye1d alongside bark painting from West Arnhem Land, placards from recent indigenous protest movements and works of contemporary art that reckon with Australia’s past and future. New Study: Engage Kids With 7x the Effect. In education literature, "engagement" is a linchpin word, routinely cited as essential. 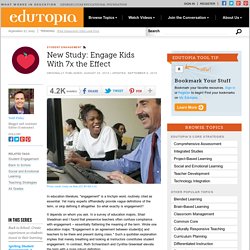 Yet many experts offhandedly provide vague definitions of the term, or skip defining it altogether. So what exactly is engagement? It depends on whom you ask. In a survey of education majors, Shari Steadman and I found that preservice teachers often confuse compliance with engagement -- essentially flattening the meaning of the term. Wrote one education major, "Engagement is an agreement between student[s] and teachers to be there and present during class. " Writing for an academic journal: 10 tips. Culture - Before Marvel and DC: Superheroes of the ancient world. Over the past few years, even the most ardent comic book nerd might have wondered if there were too many superhero movies playing in the local multiplex. 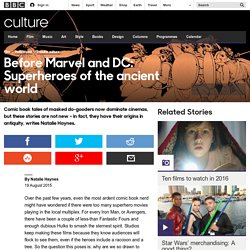 For every Iron Man, or Avengers, there have been a couple of less-than Fantastic Fours and enough dubious Hulks to smash the sternest spirit. Studios keep making these films because they know audiences will flock to see them, even if the heroes include a raccoon and a tree. So the question this poses is: why are we so drawn to superhero stories? And since when? The answer to the second question is more brief than the first. Think your world view is fixed? Learn another language and you’ll think differently. Bilinguals get all the perks. 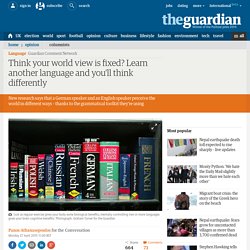 Better job prospects, a cognitive boost, and even protection against dementia. Now new research shows that they can also view the world in different ways depending on the language they are operating in. In the past 15 years there has been an overwhelming amount of research on the bilingual mind, with the majority of the evidence pointing to the tangible advantages of using more than one language. Going back and forth between languages appears to be a kind of brain training, pushing your brain to be flexible. Just as regular exercise gives your body some biological benefits, mentally controlling two or more languages gives your brain cognitive benefits. In research we recently published in Psychological Science, we studied German-English bilinguals and monolinguals to find out how different language patterns affected how they reacted in experiments.

Lectura & escriptura. Resources for Student Teachers. Teaching & Research on teaching. Improve Your Writing with This Periodic Table of the Figures of Speech. CLIL. Resources to flip classrooms.