The Age of Enlightenment

A creative writing activity: A dark and stormy night. Island Survival Guide - Primal Survivor. Islands are unique and diverse microcosms scattered through the vast oceans of our planet. 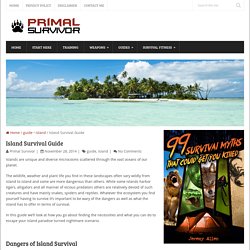 The wildlife, weather and plant life you find in these landscapes often vary wildly from island to island and some are more dangerous than others. While some islands harbor tigers, alligators and all manner of vicious predators others are relatively devoid of such creatures and have mainly snakes, spiders and reptiles. Whatever the ecosystem you find yourself having to survive it’s important to be wary of the dangers as well as what the island has to offer in terms of survival. In this guide we’ll look at how you go about finding the necessities and what you can do to escape your island paradise turned nightmare scenario. Dangers of Island Survival Before we get into the ins and outs of how to survive on an island we must first take time to go over the very real dangers that survival in an island paradise pose. 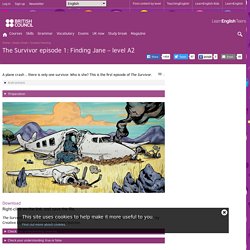 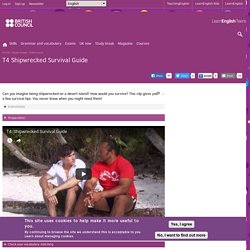 Is anybody there? Where am I? Ah, so hot … Somebody! Anybody!!! If only I wasn’t alone on this infernal island. Nga: Are you alright? Man: Er, I’ve been shipwrecked, I’ve been shipwrecked and I’m alone, and I’m hungry and I’m thirsty and I don’t know what to do. Nga : Th is is your lucky day. Man: Oh, fantastic! Nga : Ok, let’s go and feed you with something. Man: Thanks. Survival - Daily Writing Prompt. Desert Island Escape. This is a speaking activity for higher level students with good imaginations. Procedure Set the scene of a plane accident or ship wreck.A group of students have ended up on a desert island with a few random objects.Bring in a bag of objects from home or things that you can gather from around the school, for example, a coat hanger, a ball of string, clothes pegs, a corkscrew etc.Tell the students that they have to use the objects they have to help them survive on the island. They should think of ways of putting the items to good use.Give each group a set time and then listen to each group's ideas.Hold a class vote to decide which group would survive for the longest. 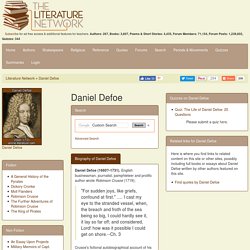 Jonathan Swift. Jonathan Swift (1667-1745), Irish cleric, political pamphleteer, satirist, and author wrote Gulliver's Travels (1726); I grew weary of the sea, and intended to stay at home with my wife and family. 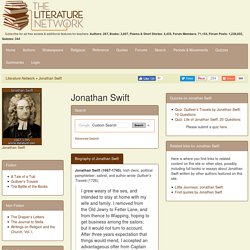 I removed from the Old Jewry to Fetter Lane, and from thence to Wapping, hoping to get business among the sailors; but it would not turn to account. After three years expectation that things would mend, I accepted an advantageous offer from Captain William Prichard, master of the Antelope, who was making a voyage to the South Sea. We set sail from Bristol, May 4, 1699, and our voyage was at first very prosperous. First published under the pseudonym Lemuel Gulliver Gulliver's Travels (1726) is considered Swift's masterpiece, a culmination of his active years in politics with the Whigs then Tories. Uncle Godwin sent Jonathan to the Kilkenny Grammar School from 1674 to 1682 where he met friend and future playwright and poet William Congreve (1670-1729). 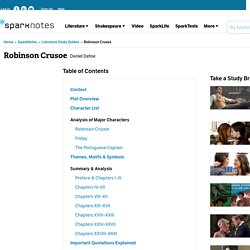 Defoe, as a journalist, makes the novel seem real, not fiction by mentioning many details. There are lists of objects and actions which make the reader think that whatever happens to Crusoe is true. The author produces this impression of complete reality by employing three main methods which are the using of details, the form of biography or the first person narration and the nautical language. >> Read the full answer free at Read more→ Structure of Robinson Crusoe. Answer: Two divergent views have been expressed by critics about the structure of the novel Robinson Crusoe, One view is that this novel is episodic, and lacks fundamental unity. See all 9 readers' notes → Gulliver’s Travels. A Modest Proposal. The Enlightenment (1650–1800): Overview. The Enlightenment was a sprawling intellectual, philosophical, cultural, and social movement that spread through England, France, Germany, and other parts of Europe during the 1700s. 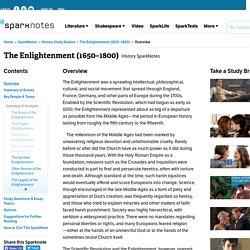 Enabled by the Scientific Revolution, which had begun as early as 1500, the Enlightenment represented about as big of a departure as possible from the Middle Ages—the period in European history lasting from roughly the fifth century to the fifteenth. The millennium of the Middle Ages had been marked by unwavering religious devotion and unfathomable cruelty. Rarely before or after did the Church have as much power as it did during those thousand years. Robinson Crusoe.