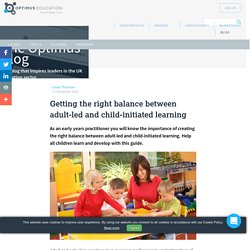 Help all children learn and develop with this guide. Adult-led activities are based on our own professional understanding of what we should teach young children and what experiences they should have. Through adult-led activities we can introduce children to new ideas, provide opportunities for them to develop their skills and ensure that they experience all areas of learning in the Early Years Foundation Stage (EYFS). During adult-led learning we can feel that we are in control of the teaching we are providing. Heuristic play. 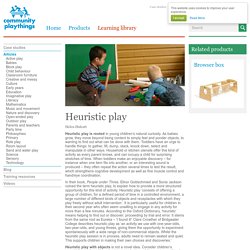 As babies grow, they move beyond being content to simply feel and ponder objects, to wanting to find out what can be done with them. Toddlers have an urge to handle things: to gather, fill, dump, stack, knock down, select and manipulate in other ways. Household or kitchen utensils offer this kind of activity as every parent knows, and can occupy a child for surprising stretches of time. When toddlers make an enjoyable discovery – for instance when one item fits into another, or an interesting sound is produced – they often repeat the action several times to test the result, which strengthens cognitive development as well as fine muscle control and hand/eye coordination. In their book, People under Three, Elinor Goldschmied and Sonia Jackson coined the term heuristic play, to explain how to provide a more structured opportunity for this kind of activity. Heuristic play with objects is not a novel idea.

This misconception is based on a separate underlying proficiency (SUP) hypothesis. This theory, now discredited, suggests that languages are stored in separate compartments or containers, which represent half the capacity of the monolingual brain. Decades of research into bi- and multilingualism has shown that there is no causal relationship between bilingualism and language delay. 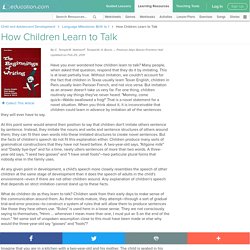 Many people, when asked that question, respond that they do it by imitating. This is at least partially true. Without imitation, we couldn't account for the fact that children in Texas usually learn Texan English, children in Paris usually learn Parisian French, and not vice versa. But imitation as an answer doesn't take us very far. For one thing, children routinely say things they've never heard: "Mommy, come quick—Waldo swallowed a frog! " At this point some would amend their position to say that children don't imitate others sentence by sentence. 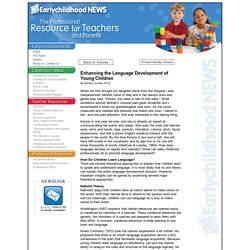 Mother came to help and in her always wise and gentle way said, "Honey, you need to talk to that baby. " What wonderful advice! Mother's counsel paid great dividends and I remembered it when our granddaughter was born. As the nurse measured and cleaned and dressed that brand new soul, I talked to her...and she paid attention.

She was interested in this talking thing. Kenzie is one year old now, and she is already an expert at communicating her wants and needs. How Do Children Learn Language? Nativist TheoryNativists argue that children have an inborn desire to make sense of the world. Waddington (1957) explains that certain behaviors are learned easily or canalized by members of a species. How can young children best learn languages? The British Council's Tracey Chapelton explains how parents of young children can lay the foundations for success. Development Matters FINAL PRINT AMENDED. Different types play. Parents articles how young children learn english as another language russian.

The Woman Who Changed Her Brain: Barbara Arrowsmith-Young at TEDxToronto. How young children learn English as another language. By Opal Dunn, educational consultant and author Introduction Young children are natural language acquirers; they are self-motivated to pick up language without conscious learning, unlike adolescents and adults. 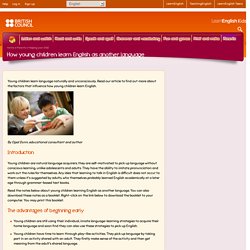 They have the ability to imitate pronunciation and work out the rules for themselves. Any idea that learning to talk in English is difficult does not occur to them unless it’s suggested by adults, who themselves probably learned English academically at a later age through grammar-based text books. Read the notes below about young children learning English as another language. The advantages of beginning early Young children are still using their individual, innate language-learning strategies to acquire their home language and soon find they can also use these strategies to pick up English. Stages in picking up English Spoken language comes naturally before reading and writing.