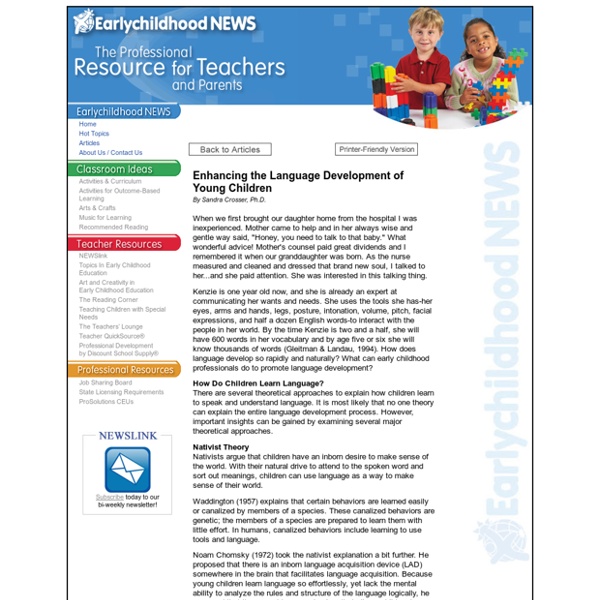 When we first brought our daughter home from the hospital I was inexperienced. Mother came to help and in her always wise and gentle way said, "Honey, you need to talk to that baby." What wonderful advice! Mother's counsel paid great dividends and I remembered it when our granddaughter was born. As the nurse measured and cleaned and dressed that brand new soul, I talked to her...and she paid attention. She was interested in this talking thing. Kenzie is one year old now, and she is already an expert at communicating her wants and needs. How Do Children Learn Language? Nativist TheoryNativists argue that children have an inborn desire to make sense of the world. Waddington (1957) explains that certain behaviors are learned easily or canalized by members of a species. Noam Chomsky (1972) took the nativist explanation a bit further. When children are born they have the ability to differentiate any sound in any language system (Werker & Lalonde, 1988). What happened? Infants Toddlers Lust, B.

How young children learn English as another language By Opal Dunn, educational consultant and author Introduction Young children are natural language acquirers; they are self-motivated to pick up language without conscious learning, unlike adolescents and adults. I Said I Want the Red Bowl! Responding to Toddlers' Irrational Behavior Pin It Amelia, told that she can’t have a fifth book before bedtime, shouts: “You are the meanest mommy! You are not invited to my birthday party!” Derek, when offered a choice between carrots and cheese, not ice cream, before dinner announces: “I don’t like the choices you are choicing me!” Alex hurls a bowl of his favorite cereal off the table and screams, “I said the red bowl, not the blue bowl!”

How can young children best learn languages? The British Council's Tracey Chapelton explains how parents of young children can lay the foundations for success. Children's brains are highly active Your child is unique, but what all children have in common is natural curiosity and an innate ability to learn. Kuhl states that babies and young children are geniuses at acquiring a second language.

Multilingual Preschoolers It’s amazing how young children learn to converse with others. They have to not only internalize grammar and vocabulary, but also develop an understanding of culture: how to take turns in a conversation, who to talk to, and how to narrate a story. For dual language learners (DLLs) — children under the age of 5 with a home language other than English — that process can be complex. These young children must constantly navigate between two languages and cultures, while learning the rules of both. How can parents and teachers best educate young children? What principles can both teachers and parents bring to the education of very young children? Gillian Craig, who was part of the Learning Time with Shaun and Timmy writing team, explains. As teachers and parents, we follow certain principles in our roles.

How can I help my child to start talking? (Video) Health visitor Sara Patience describes how you can help develop your child's language skills by talking and playing with her. Show transcript Hide transcript MIT Brain Study: Back-And-Forth Talk Key To Developing Kids' Verbal Skills New MIT research finds that for children's brain development, parents don't just need to talk to their kids — it's important to talk with them, in back-and-forth exchanges. "What we found is, the more often parents engaged in back-and-forth conversation with their child, the stronger was the brain response in the front of the brain to language," said cognitive neuroscience professor John Gabrieli. Story continues below

Let's Talk What do babies need in order to learn and thrive? One thing they need is conversation — responsive, back-and-forth communication with their parents and caregivers. This interactive engagement is like food for their developing brains, nurturing language acquisition, early literacy, school readiness, and social and emotional well-being. Being Multilingual: You speak with an accent. I don’t. Accents are things that only other people have. They are, by extension, things that you don’t want to have. Accents are, in short, shortcomings. This is why, if someone tells you that “you speak with no accent”, you can be sure of two things: that you have received words of praise indeed; and that you speak with the same accent as that person. So the person is actually not only praising her own accent, she is also giving evidence that she has no idea she’s got one. We seldom hear people say “We speak with an accent” or “I speak with an accent” – unless we’re talking about our uses of foreign languages.

A few more myths about speakers of multiple languages Does multilingualism cause language delays and identity problems? The British Council's Nayr Ibrahim busts a few more myths about speakers of multiple languages. Myth: Multilingualism causes language delay Raising children bilingually is sometimes believed to cause language delay. This misconception is based on a separate underlying proficiency (SUP) hypothesis. This theory, now discredited, suggests that languages are stored in separate compartments or containers, which represent half the capacity of the monolingual brain. Why does my toddler love repetition? Paediatric speech and language therapist It may test your patience when your toddler demands 'Row, row, row your boat' for the 10th time. But there's a good reason for her insistence. Toddlers love repetition because it helps them to learn, and because it's familiar and comforting.