How Children Learn to Talk 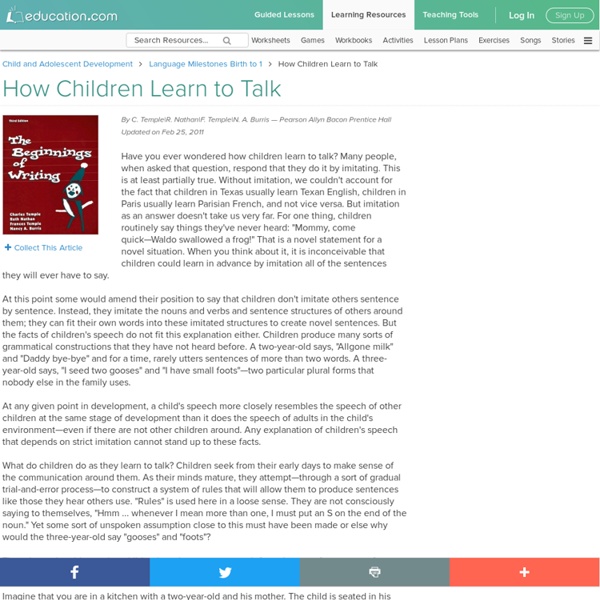 Have you ever wondered how children learn to talk? Many people, when asked that question, respond that they do it by imitating. This is at least partially true. Without imitation, we couldn't account for the fact that children in Texas usually learn Texan English, children in Paris usually learn Parisian French, and not vice versa. But imitation as an answer doesn't take us very far. For one thing, children routinely say things they've never heard: "Mommy, come quick—Waldo swallowed a frog!" At this point some would amend their position to say that children don't imitate others sentence by sentence. At any given point in development, a child's speech more closely resembles the speech of other children at the same stage of development than it does the speech of adults in the child's environment—even if there are not other children around. What do children do as they learn to talk? Imagine that you are in a kitchen with a two-year-old and his mother. Child: Want other one spoon, Daddy.

A few more myths about speakers of multiple languages Does multilingualism cause language delays and identity problems? The British Council's Nayr Ibrahim busts a few more myths about speakers of multiple languages. Myth: Multilingualism causes language delay Raising children bilingually is sometimes believed to cause language delay. This misconception is based on a separate underlying proficiency (SUP) hypothesis. This theory, now discredited, suggests that languages are stored in separate compartments or containers, which represent half the capacity of the monolingual brain. What happens in the brain when you learn a language? Learning a foreign language can increase the size of your brain. This is what Swedish scientists discovered when they used brain scans to monitor what happens when someone learns a second language. The study is part of a growing body of research using brain imaging technologies to better understand the cognitive benefits of language learning. Tools like magnetic resonance imaging (MRI) and electrophysiology, among others, can now tell us not only whether we need knee surgery or have irregularities with our heartbeat, but reveal what is happening in our brains when we hear, understand and produce second languages. The Swedish MRI study showed that learning a foreign language has a visible effect on the brain. Young adult military recruits with a flair for languages learned Arabic, Russian or Dari intensively, while a control group of medical and cognitive science students also studied hard, but not at languages.

I Said I Want the Red Bowl! Responding to Toddlers' Irrational Behavior Pin It Amelia, told that she can’t have a fifth book before bedtime, shouts: “You are the meanest mommy! You are not invited to my birthday party!” Derek, when offered a choice between carrots and cheese, not ice cream, before dinner announces: “I don’t like the choices you are choicing me!” Alex hurls a bowl of his favorite cereal off the table and screams, “I said the red bowl, not the blue bowl!” How young children learn English as another language By Opal Dunn, educational consultant and author Introduction Young children are natural language acquirers; they are self-motivated to pick up language without conscious learning, unlike adolescents and adults.

Does being bilingual make you smarter? Language teacher and researcher Miguel Angel Muñoz explains the latest research on how being bilingual affects your brain, ahead of a British Council seminar in Cardiff on whether learning a foreign language makes you smarter. You can watch the live-streamed seminar on Tuesday, 3 June. More than half the world's population uses two or more languages every day It is hard to estimate the exact number of bilingual people in the world, as there is a lack of reliable statistics .

KQED Public Media for Northern CA There was a direct correlation between the children who’d heard a lot of parent talk and how prepared they were to learn once they arrived at school. Hart and Risley wrote, “With few exceptions, the more parents talked to their children, the faster the children’s vocabularies [grew] and the higher the children’s IQ test scores at age 3 and later.” For Suskind, a lightbulb went on. “The truth is, much of what you see in children born into poverty is analogous to children born deaf,” Suskind said. “It’s a really important point. The most fundamental science shows that it’s really language, and all that comes with it, the brain-building aspect of things, that makes a difference.”

6 Types of Play: How Children's Play Becomes More Social Play is a serious business. The pioneering developmental psychologist Lev Vygotsky thought that, in the preschool years, play is the leading source of development. Through play children learn and practice many basic social skills. They develop a sense of self, learn to interact with other children, how to make friends, how to lie and how to role-play.