3D-Printed Family Portraits : DoubleMe3d. It was about time that the traditional family portrait entered the 21st century; DoubleMe3d, a full-body 3-D scan and print studio in the Netherlands, has made that possible. 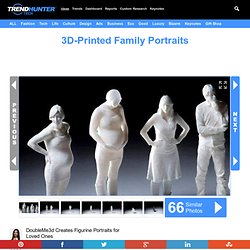 3D-Printed Metal Furniture : Dragon Bench. Pixelated Selfie Apps : LEBLOX. By: Rahul Kalvapalle - Published: Apr 20, 2014 • References: leblox & visualnews LEBLOX is an app that can help you create pixelated, 3D-printed avatars of yourself, your favorite fictional characters or even your pet. 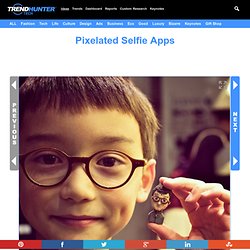 It is the brainchild of Paris-based creatives Mathieu Lecoupeur and Soy Phompraseuth. LEBLOX can be used in two different ways -- you can either take a photo, or convert and existing photo on your phone to a flat, pixelated version. You can then create a custom 3D pixelated avatar and request LEBLOX to 3D-print your design. The makers of LEBLOX say they hope to provide the service for only 20 euros (including shipping) for French addresses, and are actively searching for a 3D printing partner in the US to help them access potential customers there.

Inventor Develops Synthetic "Leaf" That Produces Oxygen. Julian Melchiorri, a graduate of the Royal College of Art, claims to have developed a silk leaf that could create oxygen for space travel as well as make the air nicer here on Earth. 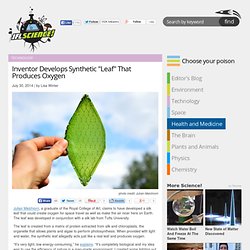 The leaf was developed in conjunction with a silk lab from Tufts University The leaf is created from a matrix of protein extracted from silk and chloroplasts, the organelle that allows plants and algae to perform photosynthesis. When provided with light and water, the synthetic leaf allegedly acts just like a real leaf and produces oxygen. “It’s very light, low energy-consuming,” he explains. Women should get chance to freeze their eggs - The Gurdian. Life-extending drugs take humanity into new territory - opinion - 02 October 2014. The reasons to be cautious about taking longevity drugs probably won’t hold us back. 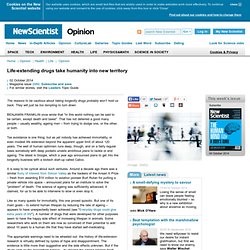 They will just be too tempting to turn down BENJAMIN FRANKLIN once wrote that "in this world nothing can be said to be certain, except death and taxes". That has not deterred a good many people – usually wealthy, ageing men – from trying to dodge one, or the other, or both. Could This 3-D Printed Cast Really Heal Bones Faster? How technology is changing marketing. A transformation of marketing is underway as we spend more time on our mobiles, tablets and laptops. 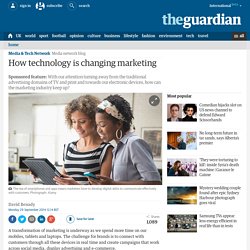 The challenge for brands is to connect with customers through all these devices in real time and create campaigns that work across social media, display advertising and e-commerce. The real-time conversations brands have with people as they interact with websites and mobile apps has changed the nature of marketing. The modern-day marketing department needs to combine the creative side of the discipline – using powerful narratives to tap into people’s wishes and aspirations – with the technical side of data, digital engineering and analytics.

The two areas do not always sit easily together. Getting creative marketers to work alongside technical staff can be a huge challenge. The panel examined the challenges of bringing together these two distinct worlds. Three areas of marketing which have been transformed by digital are the speed, relevance and reach of campaigns. Key discussion points. How an empty crisp packet can be used to eavesdrop on conversations. Researchers at the Massachusetts Institute of Technology (MIT), working in conjunction with Microsoft and Adobe, have developed a method of reconstructing sound from a video of an object – letting them use a crisp packet, glass of water, or potted plant as a microphone. 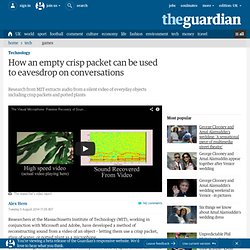 The technology is similar to the laser microphones used by spies around the world to eavesdrop on conversations by measuring minute vibrations in reflective surfaces. But rather than using expensive, specialist equipment, the researchers were able to extract audio from a high-speed video of everyday objects. In one instance, they even extracted recognisable sound from a video shot on a normal digital camera. “When sound hits an object, it causes the object to vibrate,” explained MIT graduate student Abe Davis.

A Decade in the Making, a New Human Brain Map Shows Structures Never Before Seen. A new map, a decade in the works, shows structures of the brain in far greater detail than ever before, providing neuroscientists with a guide to its immense complexity. 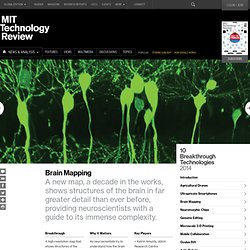 Breakthrough A high-resolution map that shows structures of the human brain as small as 20 micrometers. Why It Matters As neuroscientists try to understand how the brain works, they need a detailed map of its anatomy. Key Players Katrin Amunts, Jülich Research Centre Alan Evans, Montreal Neurological Institute Karl Deisseroth, Stanford University Neuroscientists have made remarkable progress in recent years toward understanding how the brain works. As part of the Human Brain Project, an international team of researchers led by German and Canadian scientists has produced a three-dimensional atlas of the brain that has 50 times the resolution of previous such maps. Future Timeline. 10 Recent Scientific Advances That Signal The Future. Technology Scientific discoveries are being made every day that are changing the world we live in. 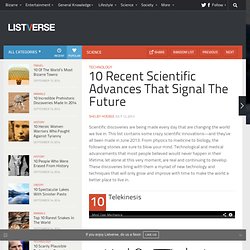 This list contains some crazy scientific innovations—and they’ve all been made in June 2013. From physics to medicine to biology, the following stories are sure to blow your mind.