Guillaume Jobst CG blog: Tools. Houdini Tricks. After not having exercised for four months, I’m finally back at it again and I feel shredded! 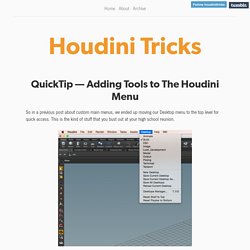 I like feeling lean and healthy. Makes me feel good and all tingly inside. Just like exercising, I like my machine to be lean when I’m rendering especially since I work on an old machine. I’m not like all you cool kids with the fancy Octane boxes. So I like to give my render all the resources possible to do its job. After Effects Command Line Render: aerender -project ~/Desktop/30-days/to/six-pack-abs.aep As you might have guessed, you can do the same in Houdini.

Environment Setup Command line rendering is not programming for those of you about to close the browser window or tab. Now, before we continue, I’m on OS X so that means I’m using the Terminal and I have my environment set up to initialize Houdini when I launch a Terminal session. If you’re on Windows, it may work similarly. Command Line Magic Lets say I have a .hip file called ripped.hip that has a Mantra node called mantra_out. Next Time. FX Thinking. I, Houdini. HoudiniGettingStarted - cgwiki. So you've decided to take a look at Houdini? 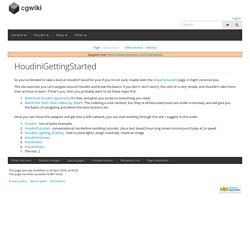 Good for you! If you're not sure, maybe skim the MayaToHoudini page, it might convince you. This site assumes you can navigate around Houdini and know the basics. If you don't, don't worry, the core UI is very simple, and shouldn't take more than an hour to learn. If that's you, then you probably want to do these steps first: Download Houdini Apprentice. Once you can move the viewport and get into a SOP network, you can start working through this site, I suggest in this order: Houdini - lots of quick examples HoudiniTutorials - conversational, borderline rambling tutorials. Useful Expressions - Ryoji CG Memo. Parameterscenter position ----------$CEX, $CEY, $CEZcentroid(".. 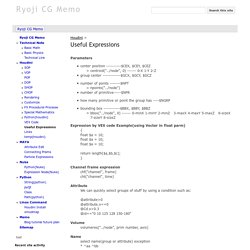 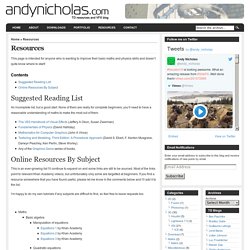 Contents Suggested Reading List An incomplete list, but a good start. Online Resources By Subject. SCATTER. Deborah R. Fowler. Math for VSFX Posted 2013 Updated on Jan 12 2017 Visual Effects produces those things which cannot be real, but can be imagined and made to look real. 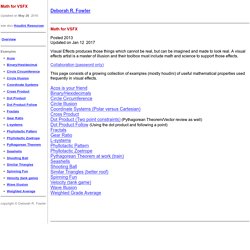 Houdini. Today I will show 2 plugins I wrote to give me more control when it comes to deletes points. 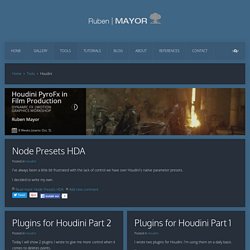 Many times, when you run when you run sims with collisions, you will have particles going through that object and continue to travel. In fig. the particle turns red when it doesn't collide properly and goes through the object. We can not just select those bad particles and delete them when they are inside or outside or collision object. In fig. 2 I delete my particle when it goes through. Unfortunately, we can see it disappear in front of the camera. In fig 3 I've selected all my bad particles and used them to get the id numbers to delete.

In the next video, I'm using 2 custom sop I wrote. The second sop will compare the attribute value in the the 1st input and compare it to the attribute values of the 2nd input. Jarrod Hasenjager - Material Studies: Metals. Houdini // flipswitchingmonkey. Driving DOP sims with animated geometry converted to velocity fields can be a lot faster and offers more control than many other means of influencing sims. 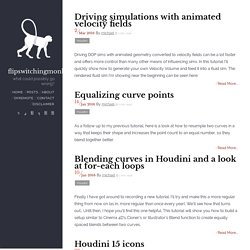 In this tutorial I’ll quickly show how to generate your own Velocity Volume and feed it into a fluid sim. The rendered fluid sim I’m showing near the beginning can be seen here: As a follow up to my previous tutorial, here is a look at how to resample two curves in a way that keeps their shape and increases the point count to an equal number, so they blend together better. Finally I have got around to recording a new tutorial. I’ll try and make this a more regular thing from now on (as in, more regular than once every year). Just like before for H13 and H14, I made a few custom icons to keep things organized on my desktop.