Banksy’s refugee piece shows us how to protest – and grieve. To see interesting art you don’t have to go to a gallery, you just have to walk the streets. 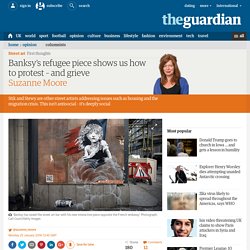 One of the most reproduced images of the past couple of weeks is a mural, commissioned in Brixton, of David Bowie, by the Australian street artist Jimmy C (James Cochran) which now acts as an unofficial shrine. Power in the Age of Social Media. Key Series: Critical Theory of Information, Communication, Media, Culture and Technology Publisher’s note: This article was extracted from Heathwood Journal of Critical Theory (Vol. 1, Issue 1). 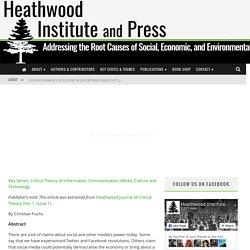 By Christian Fuchs Abstract There are a lot of claims about social and other media’s power today. Some say that we have experienced Twitter and Facebook revolutions. 1. 2011 was the year in which various Occupy movements emerged in North America, Greece, Spain, the United Kingdom and other countries. “As much as I wish that occupy would keep away from a media such as Facebook it got the advantage that it can reach out to lots of people that […] [are] otherwise hard to reach out to” (#20)“All of these social media […] Facebook, Twitter etc. helps spread the word but I think the biggest achievement is Livestream: those of us who watch or participate in change can inform other streamers of actions, police or protest moving from one place […] to another. Jack Monroe has won £24,000 in a libel action against Katie Hopkins. Behind the Scenes of Mark Zuckerberg’s Manifesto – Backchannel. Serena Williams vows: 'I won't be silent' on police violence.

Image copyright AP Serena Williams has voiced her fears about police violence, writing on Facebook: "I won't be silent. 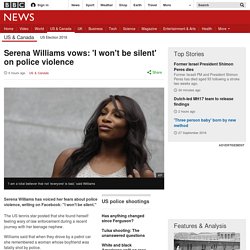 " The US tennis star posted that she found herself feeling wary of law enforcement during a recent journey with her teenage nephew. Williams said that when they drove by a patrol car she remembered a woman whose boyfriend was fatally shot by police. She is the latest athlete to speak out about friction between law enforcement and the black community in the US. Image copyright Facebook In Tuesday's Facebook post, Williams, 35, wrote that she had asked her 18-year-old nephew to drive her somewhere so she could work during the journey. She said that when she saw a police car she "remembered that horrible video of the woman in the car when a cop shot her boyfriend". Williams was apparently referring to the 6 July fatal shooting of Philando Castile, whose girlfriend live-streamed the confrontation with police in St Paul, Minnesota.

She added: "I Won't Be Silent". Is it too late to stop the trolls trampling over our entire political discourse? It was a pretty standard far-right account: anonymous (check); misappropriating St George (check); dripping with venom towards “Muslim-loving” lefties (check). 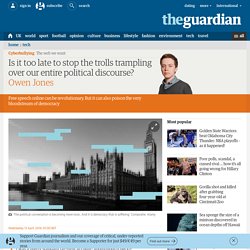 But this one had a twist. They had found my address and had taken screen shots of where I lived from Google’s Street View function. “Here’s his bedroom,” they wrote, with an arrow pointing at the window; “here’s the door he comes out at the morning”, with an arrow pointing at the entrance to my block of flats. In the time it took Twitter to shut down the account, they had already tweeted many other far-right accounts with the details. The Immortal Myths About Online Abuse. If your website (or app!) 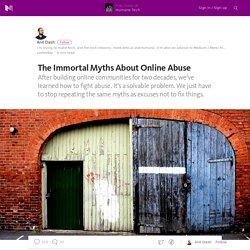 Is full of assholes, it’s your fault. The bottom line, as I wrote half a decade ago, is that if your website is full of assholes, it’s your fault. Same goes for your apps. Living in the Cult of Likability - Bret Easton Ellis. On a recent episode of the television series “South Park,” the character Cartman and other townspeople who are enthralled with Yelp, the app that lets customers rate and review restaurants, remind maître d’s and waiters that they will be posting reviews of their meals. 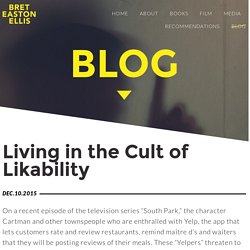 What Is Public? Make Donald Drumpf! David Lynch on Where Ideas Come From and the Fragmentary Nature of Creativity. As soon as we ask what creativity is, we invariably ponder the essential question of where good ideas come from and how we can coax them into manifesting. 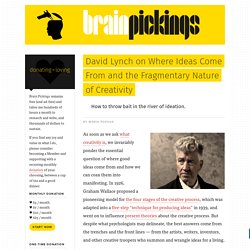 In 1926, Graham Wallace proposed a pioneering model for the four stages of the creative process, which was adapted into a five-step “technique for producing ideas” in 1939, and went on to influence present theories about the creative process. But despite what psychologists may delineate, the best answers come from the trenches and the front lines — from the artists, writers, inventors, and other creative troopers who summon and wrangle ideas for a living. In this fantastic conversation at the Brooklyn Academy of Music, LIVE from the NYPL host and interviewer extraordinaire Paul Holdengräber poses this very question — where do ideas come from?

— to legendary director David Lynch. An idea comes — and you see it, and you hear it, and you know it…We don’t do anything without an idea. Photograph courtesy of BAM. How I made the Manchester New Year's Eve photo go viral. Image copyright Joel Goodman. 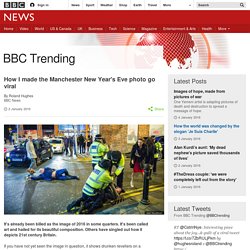