10 Chrome extensions for all the side-hustlers out there. 1. 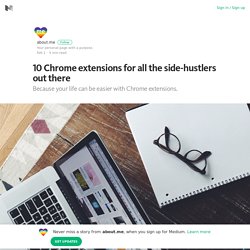 Figure It Out Whether you’re juggling clients who are a few time zones away or trying to connect with a friend about an exciting new venture before your 9-to-5 day job kicks in, time zone juggling shouldn’t be another thing you need to add to your todo list. Figure It Out makes it easy (and pretty) to see up to 10 timezones of your choosing. JustPark - where are you driving next? by Gabriele Roncoroni on Prezi. 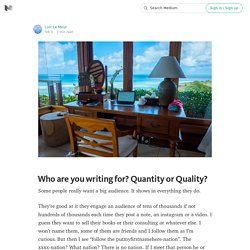 Quantity or Quality? Some people really want a big audience. It shows in everything they do. They’re good at it they engage an audience of tens of thousands if not hundreds of thousands each time they post a note, an instagram or a video. I guess they want to sell their books or their consulting or whatever else. I have fallen into that trap many times. I love writing. The easy way is to decide to write for the lowest common denominator. I want to write the same way as if we were having dinner together. Thinking about who I write for really helps. I would write for my 10 best friends and if others like it too, cool. Why Periscope Is the Next Big Thing in Social Media.

As social media becomes less of an afterthought among brands and more of an essential ingredient in the marketing mix, it is increasingly difficult to stand out on these online channels. 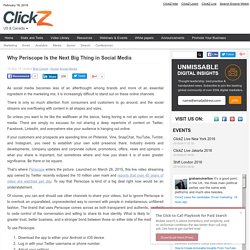 There is only so much attention from consumers and customers to go around, and the social streams are overflowing with content in all shapes and sizes. So unless you want to be like the wallflower at the dance, being boring is not an option on social media. There are simply no excuses for not sharing a deep repertoire of content on Twitter, Facebook, LinkedIn, and everywhere else your audience is hanging out online. If your customers and prospects are spending time on Pinterest, Vine, SnapChat, YouTube, Tumblr, and Instagram, you need to establish your own solid presence there. Industry events and developments, company updates and corporate culture, promotions, offers, news and opinions – what you share is important, but sometimes where and how you share it is of even greater significance. Spotlight on the National Gallery of Victoria: fusing art with social media.

Encouraging visitors to photograph artworks – and then sharing them on social media – is just one way the National Gallery of Victoria is growing audience engagement. 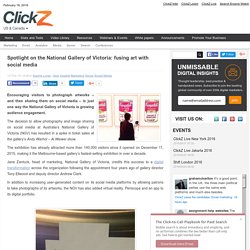 The decision to allow photography and image sharing on social media at Australia’s National Gallery of Victoria (NGV) has resulted in a spike in ticket sales at the gallery’s Andy Warhol – Ai Weiwei show. The exhibition has already attracted more than 140,000 visitors since it opened on December 11, 2015, making it the Melbourne-based gallery’s fastest-selling exhibition in over a decade.

Jane Zantuck, head of marketing, National Gallery of Victoria, credits this success to a digital transformation across the organization following the appointment four years ago of gallery director Tony Ellwood and deputy director Andrew Clark. Over 4,000 photos have been uploaded to Instagram alone since the show opened eight weeks ago. ELDERS REACT TO NETFLIX. 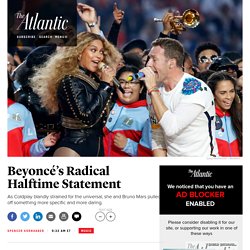 All great pop involves people acting in formation. So does all great change. And while fans scream that Beyoncé’s a “queen” and “goddess,” her core appeal really is as a drill sergeant. With Beyoncé in command, greatness is scalable, achievable, for the collective. Everyone waves their hands to the same beat. But in pop and in politics, “everyone” is a loaded term. The poor guys of Coldplay, meanwhile, actually think they can work solely at the level of the universal. The 15-Second Films Taking Instagram By Storm.

Shield 5 is a captivating new thriller that follows a wrongfully accused man on the run, desperate to clear his name. 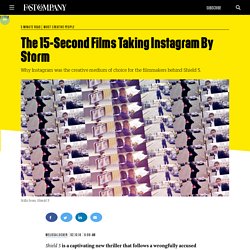 It has a lot in common with shows like Homeland and 24, except for one tiny thing: Each episode is only 15 seconds long. Brain Pickings – An inventory of the meaningful life. Quick Start Guide for Students – Hypothesis. What's the Future for Mobile Devices in the Classroom? Mobile devices are more prevalent in K–12 classrooms than ever. 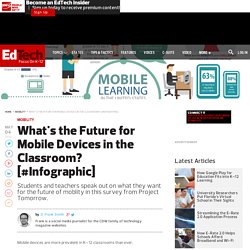 A new survey on mobile learning from Project Tomorrow shows that today's schools are relying increasingly on students having experience with devices like smartphones and tablets to engage in modern curriculum. Project Tomorrow's 12th annual Speak Up Research Project surveyed teachers and students at more than 8,000 schools and 2,600 school districts to gain insight on how these devices are affecting education. The results were adapted into a report and an infographic. Key findings from the survey include: 45 percent of surveyed administrators say blended learning initiatives have yielded positive results27 percent of surveyed high school principals say they are not yet offering online courses24 percent of surveyed students say they would prefer if all their courses were onlineNearly 75 percent of surveyed students say that "every student should be able to use a mobile device during the school day for learning.