Digital-themed Tv. Digital based games. Digital texts. The Best Free Online Resources to Learn Game Development and Gamification - Springboard Blog. Global spending on video games is set to exceed that on movies, and the average 21-year old has racked up 10,000 hours of gaming! 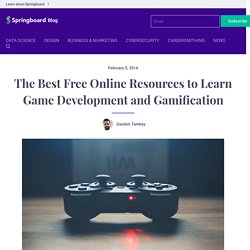 The best games and game designers can tap into human psychology in a way that we can all learn something from. Maybe you’re a gamer curious about the psychology of game design? Groping The Elephant. Note: This was originally posted as a comment on the Sparky Clarkson article I link to. 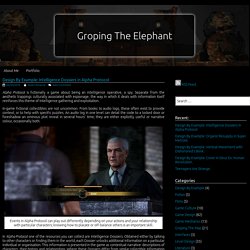 As I was writing I realised there was a broader point to be made, so I extended and adapted that comment into this article. Sparky Clarkson didn’t like Remember Me as much as I did; reading his analysis helped me understand my own feelings and why certain types of cinematic action game have a tendency to feel awkward and dishonest. I believe it’s due to a misguided attempt to hide from players that they are taking actions within a fictionalised virtual world that has its own specific rules and limitations; a focus on cinematic as the end rather than the means. I agree that the goal of the “cinematic action game” genre is to “engage the player as closely as possible with the characters and their stories” but I don’t think making systems invisible is the only, or even the best, way of achieving this. 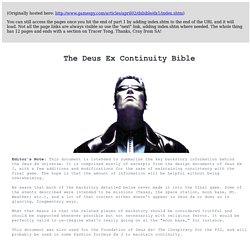 It is comprised mostly of excerpts from the design documents of Deus Ex 1, with a few additions and modifications for the sake of maintaining consistency with the final game. The hope is that the amount of information will be helpful without being overwhelming. Be aware that much of the backstory detailed below never made it into the final game. In The Games Of Madness: GDC 2013 Talk. The Script I just finished cleaning up the script for the GDC2013 talk and it can be gotten from here: Additional Resources. 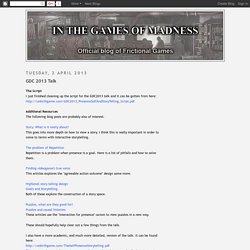 Using User Research to Improve Game Narratives. Game Design Aspect of the Month: Chasing the Heroine's Journey in Games. In this article, game writer Sande Chen ponders how to find the heroine's journey, or the internal life of characters, in games. 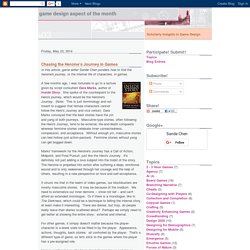 A few months ago, I was fortunate to go to a lecture given by script consultant Dara Marks, author of Inside Story. She spoke of the counterpoint to the Hero's journey, which would be the Heroine's Journey. Video game confidential: Susan O'Connor at TEDxBeaconStreet. TGA - Self Expression and the Illusion of Choice In Narrative. Game narratives should be about players shaping and expressing their own experience, not shaping the story itself. 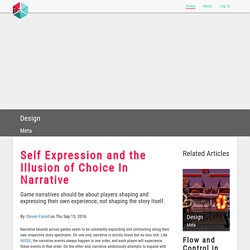 By Steven Farrell on Thu Sep 15, 2016 Narrative bounds across games seem to be constantly expanding and contracting along their own respective story spectrums. On one end, narrative is strictly linear but no less rich. Like INSIDE, the narrative events always happen in one order, and each player will experience these events in that order.