18 ways to educate yourself every day (because nerds are sexy) « ♥ Malavika ♥ “Anyone who stops learning is old, whether at 20 or 80. 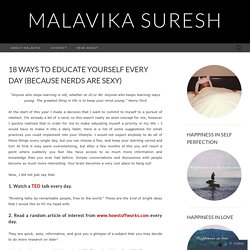 Anyone who keeps learning stays young. The greatest thing in life is to keep your mind young.” Henry Ford At the start of this year I made a decision that I want to commit to myself to a pursuit of intellect. I’m already a bit of a nerd, so this wasn’t really an alien concept for me, however I quickly realized that in order for me to make educating myself a priority in my life – I would have to make it into a daily habit. Wow, I did not just say that. 1. “Riveting talks by remarkable people, free to the world.” 2. They are quick, easy, informative, and give you a glimpse of a subject that you may decide to do more research on later! A lovely reader recommended the podcasts “Stuff you should know” and “Stuff mom never told you” which can be found on the website. 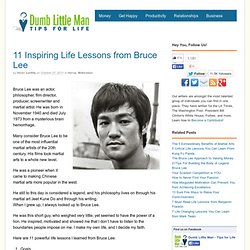 He was born in November 1940 and died July 1973 from a mysterious brain hemorrhage. Many consider Bruce Lee to be one of the most influential martial artists of the 20th century. His films took martial arts to a whole new level. He was a pioneer when it came to making Chinese martial arts more popular in the west. He still to this day is considered a legend, and his philosophy lives on through his martial art Jeet Kune Do and through his writing. When I grew up, I always looked up to Bruce Lee. He was this short guy, who weighed very little, yet seemed to have the power of a lion.

Here are 11 powerful life lessons I learned from Bruce Lee: Goals “A goal is not always meant to be reached, it often serves simply as something to aim at.” Goals serve as something to aim for, so don’t get too hung up on reaching them. Flexibility The happiest people in the world are flexible. Time Service Acceptance Ego. The 26 Best Self-Improvement Posts Ever. Need a place to find the best self-improvement blog posts ever? 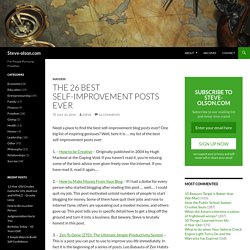 One big list of inspiring geniuses? Well, here it is… my list of the best self-improvement posts ever: 1. – How to be Creative – Originally published in 2004 by Hugh Macleod at the Gaping Void. If you haven’t read it, you’re missing some of the best advice ever given freely over the internet. If you have read it, read it again… 2. – How to Make Money From Your Blog – If I had a dollar for every person who started blogging after reading this post… well… I could quit my job. 3. – Zen To Done (ZTD): The Ultimate Simple Productivity System – This is a post you can put to use to improve you life immediately. 4. – How to Learn (But Not Master) Any Language in 1 Hour (Plus: A Favor) – Tim Ferris describes in detail how you can learn the basics of new language quickly through a method he calls deconstruction. 7. – Do You Have Weirdo Syndrome?

Related:  Self-Improvement   -  18 ways to educate yourself every day (because nerds are sexy) « ♥ Malavika ♥   -  Marc and Angel Hack Life - Practical Tips for Productive Living   -  The 26 Best Self-Improvement Posts Ever   -  Education   -  Enterprise