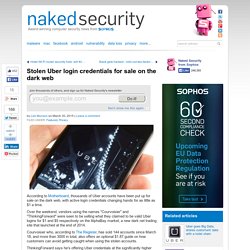 Over the weekend, vendors using the names "Courvoisier" and "ThinkingForward" were seen to be selling what they claimed to be valid Uber logins for $1 and $5 respectively on the AlphaBay market, a new dark net trading site that launched at the end of 2014. Courvoisier who, according to The Register, has sold 144 accounts since March 18, and more than 3000 in total, also offers an optional $1.87 guide on how customers can avoid getting caught when using the stolen accounts. ThinkingForward says he's offering Uber credentials at the significantly higher price of $5 a pop, but notes: I will guarantee that they are valid and live ONLY. Discounts on bulk purchase. We investigated and found no evidence of a breach.

. → Can't view the video on this page? Image of Uber courtesy of MAHATHIR MOHD YASIN / Shutterstock.com. Silk Road lieutenant Peter Nash pleads guilty. An Australian man who worked as the main moderator of the underground Silk Road online drugs, guns and dirty deeds bazaar has pleaded guilty to money laundering and drug trafficking charges in the US. 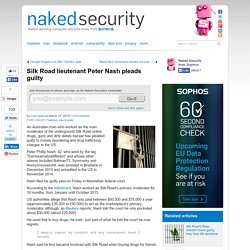 Peter Phillip Nash, 42, who went by the tag "Samesame​butdifferent" and whose other aliases included Batman73, Symmetry and Anonymousasshit, was arrested in Brisbane in December 2013 and extradited to the US in November 2014. Nash filed his guilty plea on Friday in Manhattan federal court. According to the indictment, Nash worked as Silk Road's primary moderator for 10 months, from January until October 2013. 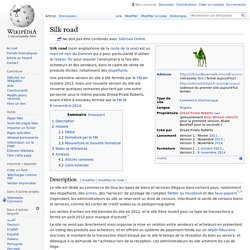 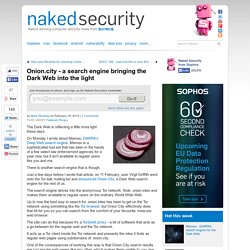 On Monday I wrote about Memex, DARPA's Deep Web search engine. Memex is a sophisticated tool set that has been in the hands of a few select law enforcement agencies for a year now, but it isn't available to regular users like you and me. There is another search engine that is though. Just a few days before I wrote that article, on 11 February, user Virgil Griffith went onto the Tor-talk mailing list and announced Onion City, a Dark Web search engine for the rest of us. The search engine delves into the anonymous Tor network, finds .onion sites and makes them available to regular users on the ordinary World Wide Web. Up to now the best way to search for .onion sites has been to get on the Tor network using something like the Tor browser, but Onion City effectively does that bit for you so you can search from the comfort of your favourite, insecure web browser. 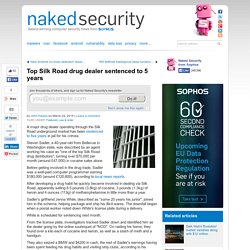 Steven Sadler, a 40-year-old from Bellevue in Washington state, was described by an agent working his case as "one of the top Silk Road drug distributors", turning over $70,000 per month (around £47,000) in cocaine sales alone. Before getting involved in the drug trade, Sadler was a well-paid computer programmer earning $180,000 (around £120,600), according to local news reports.

After developing a drug habit he quickly became involved in dealing via Silk Road, apparently selling 8.5 pounds (3.8kg) of cocaine, 3 pounds (1.3kg) of heroin and 4 ounces (113g) of methamphetamine in little more than a year. Sadler's girlfriend Jenna White, described as "some 20 years his junior", joined him in the scheme, helping package and ship his illicit wares. The downfall began when a postal worker noted down White's license plate during a delivery.