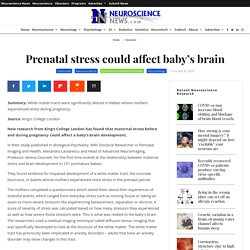 Source: King’s College London New research from King’s College London has found that maternal stress before and during pregnancy could affect a baby’s brain development. In their study published in Biological Psychiatry, MRC Doctoral Researcher in Perinatal Imaging and Health, Alexandra Lautarescu and Head of Advanced Neuroimaging, Professor Serena Counsell, for the first time looked at the relationship between maternal stress and brain development in 251 premature babies. They found evidence for impaired development of a white matter tract, the uncinate fasciculus, in babies whose mothers experienced more stress in the prenatal period. “We found that in the mums that were more stressed during pregnancy and the period before birth, white matter was altered in the babies,” said lead researcher Alexandra Lautarescu from King’s College London. 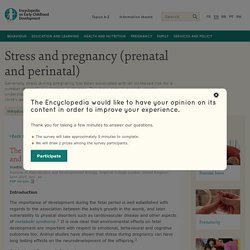 Introduction The importance of development during the fetal period is well established with regards to the association between the baby’s growth in the womb, and later vulnerability to physical disorders such as cardiovascular disease and other aspects of metabolic syndrome.1 It is now clear that environmental effects on fetal development are important with respect to emotional, behavioural and cognitive outcomes too.

Animal studies have shown that stress during pregnancy can have long lasting effects on the neurodevelopment of the offspring.2. Does Maternal Prenatal Stress Adversely Affect the Child’s Learning and Memory at Age Six? Stress during pregnancy is associated with developmental outcome in infancy - Huizink - 2003 - Journal of Child Psychology and Psychiatry. Background: Animal studies show that prenatal maternal stress may be related to cognitive impairments in offspring. 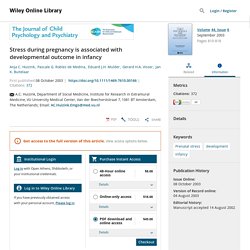 Therefore, we examined whether psychological and endocrinologic measures of stress during human pregnancy predicted developmental outcome of the infant at 3 and 8 months. Method: Self‐report data about daily hassles and pregnancy‐specific anxiety and salivary cortisol levels were collected in 170 nulliparous women in early, mid‐ and late pregnancy in a prospective design, in which healthy infants born at term were followed up after birth. Results: High levels of pregnancy‐specific anxiety in mid‐pregnancy predicted lower mental and motor developmental scores at 8 months (p < .05).

High amounts of daily hassles in early pregnancy were associated with lower mental developmental scores at 8 months (p < .05). Influence of Stress during Pregnancy on HPA Activity and Neonatal Behavior - RIEGER - 2004 - Annals of the New York Academy of Sciences - Wiley Online Library. Maternal anxiety: its effect on the fetus and the child. Maternal antenatal anxiety and behavioural/emotional problems in children: a test of a programming hypothesis. - PubMed - NCBI. Association between maternal and amniotic fluid cortisol is moderated by maternal anxiety. - PubMed - NCBI. 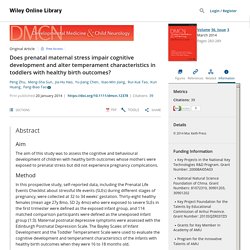 Most of the previous psychosocial–neurodevelopment studies, however, have major limitations related to the control of confounding variables or effect adjustment.6, 9 Participants in those studies included mothers who had pregnancy complications and children with adverse birth outcomes, such as preterm birth and low birthweight. Method Participants Procedure Measures Prenatal stressful life events. Prenatal stress could affect baby's brain. Prenatal stress, methylation in inflammation-related genes, and adiposity measures in early childhood: the PROGRESS cohort study. Prenatal Glucocorticoids: Short-Term Benefits and Long-Term Risks. 1. 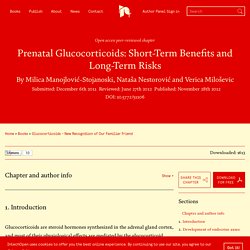 Introduction Glucocorticoids are steroid hormones synthesized in the adrenal gland cortex, and most of their physiological effects are mediated by the glucocorticoid receptor (GR), that acts as a ligand-dependent transcription factor. Coordinate changes in metabolism under glucocorticoid influence provide energy that is instantly and selectively available to vital organs, an enables them to deal with immediate environmental demands, at the expense of anabolic pathways, such as bone formation, reproduction, immunological responses and other, that are being blunted or delayed, under glucocorticoid influence [1-3]. During fetal development the synthesis of adrenal glucocorticoids precedes the establishment of a definitive structure of the gland. Environmental conditions influence the prevailing nutritional and endocrine status in mothers and fetuses. 2. 2.1.

Functional differentiation of anterior pituitary cells is under the control of transcription factors and their cofactors. 2.1.1. The Effects of Glucocorticoids on Fetal and Placental Development. 1. 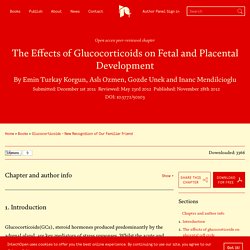 Introduction Glucocorticoids(GCs), steroid hormones produced predominantly by the adrenal gland, are key mediators of stress responses. Whilst the acute and chronic effects of pharmacological glucocorticoid excess are well-recognized (including induction of hyperglycemia, insulin resistance, hyperlipidemia, hypertension and dysphoria, with suppression of immune, inflammatory and cognitive processes), their role in the biology of the response to stress is more nuanced, with balanced homeostatic effects to facilitate short-term survival and recovery from challenge [1, 2].

In addition, glucocorticoids play an essential role in normal fetal development and are important for the development and maturation of various fetal tissues including the liver, lungs, gut, skeletal muscle and adipose tissue in preparation for extrauterine life. Glucocorticoids most notably act during late gestation to stimulate surfactant production by the lung. 2. 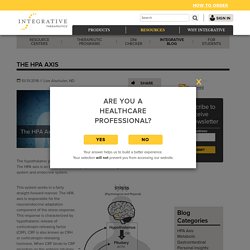 The HPA axis is an eloquent and every-dynamic intertwining of the central nervous system and endocrine system. With repeated exposure to stressors, the organism habituates to the stressor with repeated and sustained HPA axis activation. Therefore, it is important to support healthy cortisol levels in order to ensure the hypothalamus and pituitary glands maintain the appropriate level of sensitivity to the negative feedback of cortisol. Secretion of alarm chemicals such as epinephrine and norepinephrine from the adrenal medulla, as well as HPA axis activation persists along with the secretion of CRF, ACTH, and cortisol.

Interestingly, with aging, the hypothalamus and pituitary are less sensitive to negative feedback from cortisol and both ACTH and cortisol levels rise as we age.1 Older women secrete more cortisol in response to stress than do older men. The Effects of Trauma, with or without PTSD, on the Transgenerational DNA Methylation Alterations in Human Offsprings. Post Traumatic Stress Disorder and Pregnancy - MGH CWMH. Understanding post traumatic stress disorder (PTSD) during pregnancy is important given that PTSD is relatively common and persistent in nature. 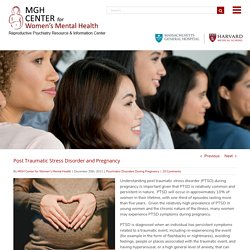 PTSD will occur in approximately 10% of women in their lifetime, with one-third of episodes lasting more than five years. Given the relatively high prevalence of PTSD in young women and the chronic nature of the illness, many women may experience PTSD symptoms during pregnancy. PTSD is diagnosed when an individual has persistent symptoms related to a traumatic event, including re-experiencing the event (for example in the form of flashbacks or nightmares), avoiding feelings, people or places associated with the traumatic event, and having hyperarousal, or a high general level of anxiety, that can result in symptoms such as insomnia, startling easily, or irritability and outbursts of anger. Studies have suggested that rates of PTSD are higher in pregnant women than in non-pregnant women. For women with PTSD, treatment is available.