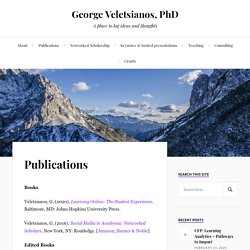 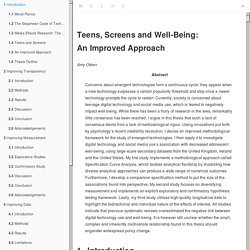 The American paediatrician had studied hundreds of six to sixteen-year-old children and concluded that over half were severely addicted to radio and movie crime dramas, having given themselves “over to a habit-forming practice very difficult to overcome, no matter how the aftereffects are dreaded”. Different ways to engage in a Twitter conversation. From time to time it can be useful to keep an ongoing Twitter conversation together. 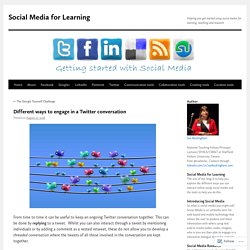 This can be done by replying to a tweet. Whilst you can also interact through a tweet by mentioning individuals or by adding a comment as a nested retweet, these do not allow you to develop a threaded conversation where the tweets of all those involved in the conversation are kept together. In the example below you can see 39 people have liked the tweet and 22 have engaged with it (19 retweets and 3 comments). Five great tips (+ free guide) from @ProfSallyBrown and @RacePhil for anyone giving their first ever lecture (or conference presentation) 1. be prepared 2. be heard 3. be comfortable 4. be confident 5. be interactive plus a useful reminder ‘be yourself’ Sue Beckingham (@suebecks) August 20, 2018 If you then click on the tweet it will then provide a view of the tweet which includes the comments. Digital Activism Gap: How Class and Costs Shape Online Collective Action. Skip to Main Content Sign In Register Close Advanced Search. 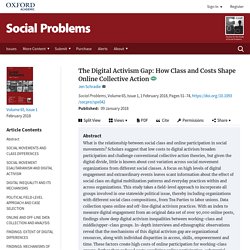 Parenting for a Digital Future – For, and against, Facebook’s Messenger Kids: Part 1 – For. In the first of two posts looking at alternative sides of the debate surrounding the new Facebook Messenger for Kids app, Alicia Blum-Ross considers the potential positives it offers. 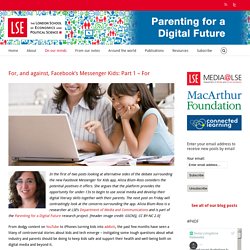 She argues that the platform provides the opportunity for under-13s to begin to use social media and develop their digital literacy skills together with their parents. The next post on Friday will contrastingly look at the concerns surrounding the app. Wasim Ahmed. Wasim Ahmed I am a Google certified digital expert who is towards the end of a PhD in social media research. 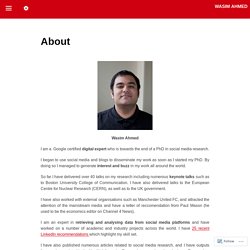 I began to use social media and blogs to disseminate my work as soon as I started my PhD. By doing so I managed to generate interest and buzz in my work all around the world. So far I have delivered over 40 talks on my research including numerous keynote talks such as to Boston University College of Communication. I have also delivered talks to the European Centre for Nuclear Research (CERN), as well as to the UK government. I have also worked with external organisations such as Manchester United FC, and attracted the attention of the mainstream media and have a letter of reccomendation from Paul Mason (he used to be the economics editor on Channel 4 News). More room for greater depth and detail: implications for academic research of Twitter’s expanded character limit.

Twitter makes its data available in real-time and at no cost, making it a popular data source for many academic researchers. 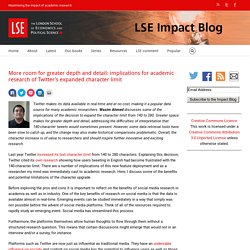 Wasim Ahmed discusses some of the implications of the decision to expand the character limit from 140 to 280. Greater space makes for greater depth and detail, addressing the difficulties of interpretation that 140-character tweets would sometimes present. However, some data retrieval tools have been slow to catch up, and the change may also make historical comparisons problematic. Overall, the character increase is of value to researchers and should inspire further innovative and exciting research. r092ssm2017. Reconsidering passivity and activity in children’s digital playNew Media &amp; Society - Marleena Mustola, Merja Koivula, Leena Turja, Marja-Leena Laakso, 2018. Childrens Commissioner for England Life in Likes 3. Keynote Talk - Gaining Powerful Insights into Social Media Listening. TAGSExplorer – TAGS. What is TAGSExplorer?

TAGSExplorer is a result of a couple of days code bashing in 2011. It mainly uses the DataTable part of the Google Visualization API to read data from a TAGS spreadsheet and format it to use with d3.js graphing library. By chucking some extra JavaScript/JQuery code (partly taken from johman’s Twitter Smash example) I’ve been able to reformat the raw Twitter data from the Google Spreadsheet and reformat it returning Twitter functionality like reply/retweet by using their Web Intents API. What is displayed: A node for each Twitterer who used the #studentexp hashtag and is stored in the spreadsheet archive.Solid lines between nodes are conversations eg @ernestopriego tweeted “@easegill I agree completely. 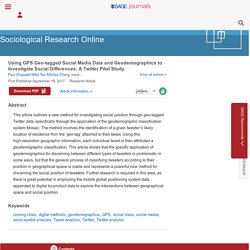 In order to achieve an appropriate corpus of tweets for analysis, we followed a multistage sequential data collection process. There were three main considerations that guided the data collection process: first, we aimed to identify as many tweets addressing ‘Horsegate’ as possible while minimizing false positives; second, we selected only the tweets with geographic information attached; finally, we aimed to ensure that a maximum number of tweets possible were tweeted from the home of the individual. This third point was necessary because geodemographic classification systems are based upon the type of people who are likely to live in a particular residential area. The data collection process was conducted sequentially, addressing each of these three considerations in turn. Figure 1. Table 2. Potential validity issues Further considerations. 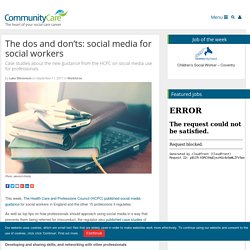 As well as top tips on how professionals should approach using social media in a way that prevents them being referred for misconduct, the regulator also published case studies of positive and negative uses of social media. Here are the key messages of those cases.

Social media and children’s mental health - Education Policy Institute. Index. Digital media challenge children’s rights around the world: The case for a General Comment on the UN Convention on the Rights of the Child. Around the globe, in the global North as well as the global South, digital media are there to stay with significant implications for child rights and children’s wellbeing online. Using Twitter for education: Beneficial or simply a waste of time?: EBSCOhost.