Symposium on Louise Richardson’s “Flavour, Taste and Smell” (Mind & Language 28 (3), 322-341) I’m very glad to be able to kick off the first of a series of symposia that Brains will be hosting on papers from Mind & Language. 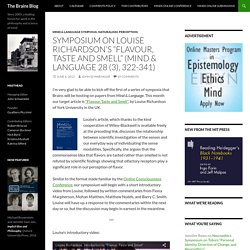 This month our target article is “Flavour, Taste and Smell”, by Louise Richardson of York University in the UK. Louise’s article, which thanks to the kind cooperation of Wiley-Blackwell is available freely at the preceding link, discusses the relationship between scientific investigation of the senses and our everyday way of individuating the sense modalities. Specifically, she argues that the commonsense idea that flavors are tasted rather than smelled is not refuted by scientific findings showing that olfactory receptors play a significant role in our perception of flavor. Similar to the format made familiar by the Online Consciousness Conference, our symposium will begin with a short introductory video from Louise, followed by written commentaries from Fiona Macpherson, Mohan Matthen, Matthew Nudds, and Barry C. 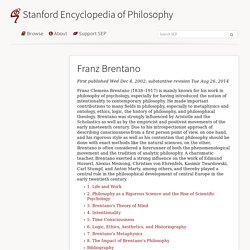 Life and Work Franz Brentano was born on January 16, 1838 in Marienberg am Rhein, Germany, a descendent of a strongly religious German-Italian family of intellectuals (his uncle Clemens Brentano and his aunt Bettina von Arnim were among the most important writers of German Romanticism and his brother Lujo Brentano became a leading expert in social economics). He studied mathematics, poetry, philosophy, and theology in Munich, Würzburg, and Berlin. Already at high school he became acquainted with Scholasticism; at university he studied Aristotle with Trendelenburg in Berlin, and read Comte as well as the British Empiricists (mainly John Stuart Mill), all of whom had a great influence on his work.

Brentano received his Ph.D. in 1862, with his thesis On the Several Senses of Being in Aristotle. After graduation Brentano prepared to take his vows; he was ordained a Catholic priest in 1864. Brentano has often been described as an extraordinarily charismatic teacher. 2. 3. 4. 5. 6. 7. 8. Trigeminal nerve. The trigeminal nerve (the fifth cranial nerve, or simply CN V) is a nerve responsible for sensation in the face and motor functions such as biting and chewing. 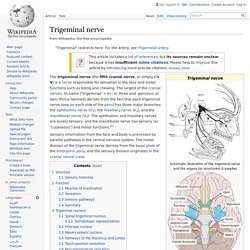 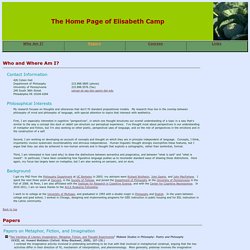 My research thus lies in the overlap between philosophy of mind and philosophy of language, with special attention to topics that intersect with aesthetics. First, I am especially interested in cognitive "perspectives", in which one thought structures our overall understanding of a topic in a way that's similar to the way a concept like duck or rabbit can structure our perceptual experience. Desire. 1. 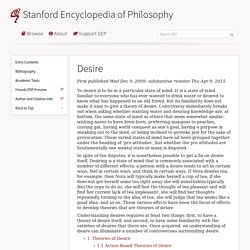 Theories of Desire There is a simple, conservative theory of desire according to which having a desire is a matter of having dispositions to act. According to this theory, dispositions to act are the only essential feature of desires; the tendencies a person has to feel certain ways or think in certain ways when she has a desire are interesting but inessential tendencies. If Nora desires tea, this is because she is disposed to get herself some tea, and her dispositions to feel good about tea, think positively about getting tea, or to keep having her thoughts turn toward getting tea are merely associated effects of her desire. The simple, conservative theory has a number of competitors, each emphasizing something different from, or in addition to, dispositions to action.

In spite of the variety of theoretical options, the simple, conservative theory of desire—the action-based theory—is the most widely-held theory, making it the appropriate place to begin any discussion. 1.6. 2. 3. Philosophy 156: Different Kinds of Mental States. We said that a mental state or mental process is a kind of condition or process which can be had only by thinking, feeling creatures. 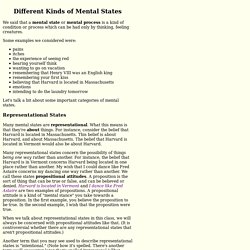 Some examples we considered were: pains itches the experience of seeing red hearing yourself think wanting to go on vacation remembering that Henry VIII was an English king remembering your first kiss believing that Harvard is located in Massachusetts emotions intending to do the laundry tomorrow Let's talk a bit about some important categories of mental states. Representational States Many mental states are representational. Many representational states concern the possibility of things being one way rather than another. When we talk about representational states in this class, we will always be concerned with propositional attitudes like that.