TakeItApart. Ideas Apple Bought, Borrowed and Stole. Share this infographic on your site! 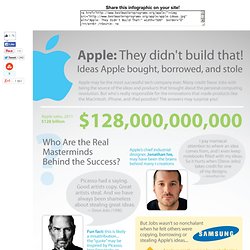 <a href=" src=" alt="Apple: They Didn't Build That! " The iPhone master race. iPhone users are elitists. 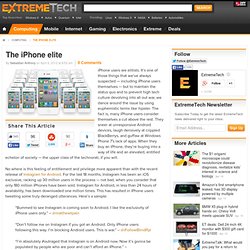 It’s one of those things that we’ve always suspected — including iPhone users themselves — but to maintain the status quo and to prevent high tech culture devolving into all out war, we dance around the issue by using euphemistic terms like hipster. The fact is, many iPhone users consider themselves a cut above the rest. They sneer at unresponsive Android devices, laugh derisively at crippled BlackBerrys, and guffaw at Windows Phone 7′s lack of apps. When they buy an iPhone, they’re buying into a way of life and an elevated, entitled echelon of society — the upper class of the technorati, if you will. No where is this feeling of entitlement and privilege more apparent than with the recent release of Instagram for Android. “Bummed to see Instagram is coming soon to Android. While the last one is hopefully a joke, there are hundreds of other examples of iPhone users who are upset at this loss of exclusivity. [Image credit]

Compare mobile phones, cameras, tablets, cities, camcorders. Internet's memory effects quantified in computer study. 16 July 2011Last updated at 16:37 By Jason Palmer Science and technology reporter, BBC News The collective memory of the internet may make us simply remember less Computers and the internet are changing the nature of our memory, research in the journal Science suggests. Psychology experiments showed that people presented with difficult questions began to think of computers. When participants knew that facts would be available on a computer later, they had poor recall of answers but enhanced recall of where they were stored.

The researchers say the internet acts as a "transactive memory" that we depend upon to remember for us. Lead author Betsy Sparrow of Columbia University said that transactive memory "is an idea that there are external memory sources - really storage places that exist in other people". "There are people who are experts in certain things and we allow them to be, [to] make them responsible for certain kinds of information," she explained to BBC News. Web plugin tells you who is on the same page. Niall Firth, technology editor Ever wondered who spends hours poring over every detail of your Facebook page?

Are you dying to speak to anyone who shares your particular fascination with the cliff top webcam at the Scottish Sealife Centre? Your wish may soon be granted. A new internet plug-in lets you interact with any other users who are visiting the same web page as you. Whoislive is only in beta at the moment, but the idea is for every web page to become a live chat room where like-minded visitors can share and socialise. It's a bit like suddenly having a conversation with the person you find yourself next to in the vegetable aisle at your local supermarket. It sounds a bit chaotic, and ultimately distracting, but it's easy to see the appeal, particularly on news sites, freeing users from the tyranny of community moderators and bypassing formal "comments" sections entirely. Free mobile apps 'drain battery faster' 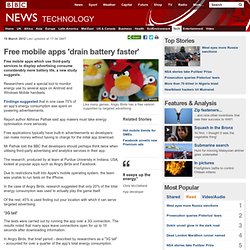 Researchers used a special tool to monitor energy use by several apps on Android and Windows Mobile handsets. Findings suggested that in one case 75% of an app's energy consumption was spent on powering advertisements. Report author Abhinav Pathak said app makers must take energy optimisation more seriously. Free applications typically have built-in advertisements so developers can make money without having to charge for the initial app download. Mr Pathak told the BBC that developers should perhaps think twice when utilising third-party advertising and analytics services in their app.

The research, produced by at team at Purdue University in Indiana, USA, looked at popular apps such as Angry Birds and Facebook. '3G tail' Confessions of a late adopter. 30 November 2011Last updated at 10:11 Being a late adopter isn't a bad thing, it just means wanting to make the most out of stuff, argues Angela Saini. 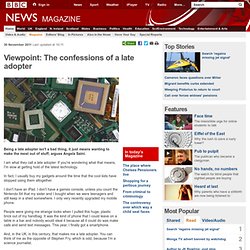 I am what they call a late adopter. If you're wondering what that means, I'm slow at getting hold of the latest technology. In fact, I usually buy my gadgets around the time that the cool kids have stopped using them altogether. I don't have an iPad. People were giving me strange looks when I pulled this huge, plastic brick out of my handbag.

And, in the UK, in this century, that makes me a late adopter. It's actually my job to be on top of new research and futuristic inventions. People expect me to know about every new gadget that comes out. Today, when youth and newness seem to count for everything, I sometimes feel embarrassed to admit that I like old things. I like my old computer, even if it is a bit slow.