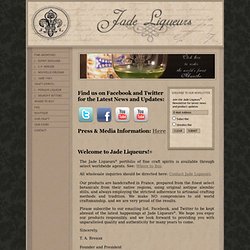 ® The Jade Liqueurs® portfolio of fine craft spirits is available through select worldwide agents. See: Where to Buy. All wholesale inquiries should be directed here: Contact Jade Liqueurs. Our products are handcrafted in France, prepared from the finest select botanicals from their native regions, using original antique alembic stills, and always employing the strictest adherence to artisanal crafting methods and tradition. Please subscribe to our emailing list, Facebook, and Twitter to be kept abreast of the latest happenings at Jade Liqueurs®. Sincerely, T. Founder and President Jade Liqueurs, LLC. Absinthe Blanchette. Another one from Jade Liqueurs/Combier. 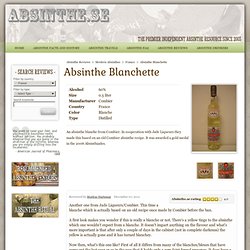 This time a blanche which is actually based on an old recipe once made by Combier before the ban. A first look makes you wonder if this is really a blanche or not. There's a yellow tinge to the absinthe which one wouldn't expect from a blanche. It doesn't impart anything on the flavour and what's more important is that after only a couple of days in the cabinet (not in complete darkenss) the yellow is actually gone and it has turned blanchey. Now then, what's this one like? Adding water to it produces a nice and steady louche and releases more of the drinks aroma character. It's a pity this only comes in 0.5 liter bottles yet but I'm told there should be 1 liter bottles soon. Lucid Absinthe Supérieure. C.F Berger (circa 1910) People sometimes refer to floral gardens in bloom to describe tastes of absinthe. 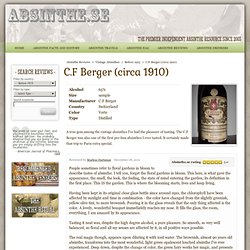 I tell you, forget the floral gardens in bloom. Blackmint. "Absinthe KUBLER" (well known by connoisseurs as Fée Verte" or "Swiss La Bleue") falls back on the long tradition of the KUBLER dynasty who distilled this famous product in the Val-de-Travers (Neuchâtel-Switzerland) from 1863 until its prohibition on October 7, 1910. 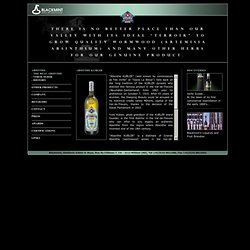 La Clandestine, the swiss absinthe. Hand-crafted in the Birthplace of Absinthe Absinthe was born in the small village of Couvet in the Val-de-Travers region of Switzerland in the second half of the 18th century and there are many stories associated with its birth. 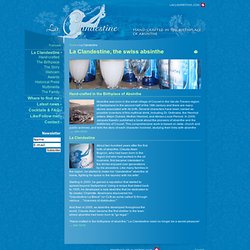 Several characters have been named as possible inventors of this mythical drink, including Dr. Ordinaire, the Henriod sisters, Major Dubied, Mother Henriod, and Abram-Louis Pernod. In 2009, Jacques Kaeslin published a book about the pioneers of absinthe and the distilleries of Couvet. This comprehensive work is based on state, church and public archives, and tells the story of each character involved, studying their links with absinthe ...... see more La Clandestine. Butterfly Absinthe. Herbsaint. Herbsaint is a brand name of anise-flavored liquor currently produced by the Sazerac Company and originally made in New Orleans, Louisiana. 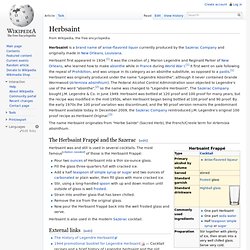 Herbsaint first appeared in 1934.[1] It was the creation of J. Marion Legendre and Reginald Parker of New Orleans, who learned how to make absinthe while in France during World War I.[1] It first went on sale following the repeal of Prohibition, and was unique in its category as an absinthe substitute, as opposed to a pastis.[1] Herbsaint was originally produced under the name "Legendre Absinthe", although it never contained Grande Wormwood (Artemisia absinthium). The Federal Alcohol Control Administration soon objected to Legendre's use of the word "absinthe",[2] so the name was changed to "Legendre Herbsaint". 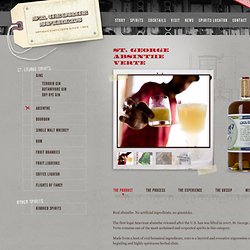 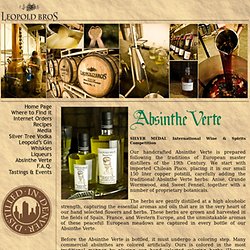 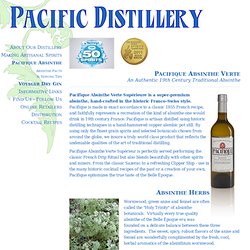 Absinthe is a distilled herbal spirit flavored with wormwood, anise and other herbs. Its flavor is similar to licorice, not unlike ouzo or arak, but this varies in prominence by brand. It is bottled at a high proof and sold as an extract or concentrate, intended to be diluted with iced water and taken as a cool, refreshing aperitif. What is Wormwood? What About Thujone? Storage Absinthe should be stored upright, in a cool, dark place, but never refrigerated or put in a freezer. Marteau Absinthe. Delaware Phoenix Distillery. About — Welcome to Vilya Spirits. Absinthe Education and Reviews. Absinthe at la Fée Verte's Absinthe House: Established 1997. The Real Absinthe Blog. Maison Premiere. The Nightjar . 'A hidden slice of old-school glamour on the fringes of Shoreditch' Absinthesalon - Alexamo Pty Ltd. Absintherie. The Best Absinthe for Sale: Buy Absinthe Online from DrinkUpNY. Catskill Cellars. Source d'absinthe - Achat d'absinthe et accessoires. 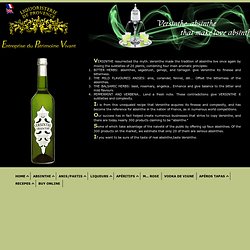 Versinthe made the tradition of absinthe live once again by mixing the subtleties of 20 plants, combining four main aromatic principles: BITTER HERBS: absinthes, sagebrush, genepi, and tarragon give Versinthe its finesse and bitterness.THE MILD FLAVOURED ANISES: anis, coriander, fennel, dill…. Offset the bitterness of the absinthes.THE BALSAMIC HERBS: basil, rosemary, angelica… Enhance and give balance to the bitter and mild flavours.PEPPERMINT AND VERBENA… Lend a fresh note.

These contradictions give VERSINTHE it subtleties and complexity.