Disturbing (But Amazing) Pictures Expose The Absurdities Of Modern Culture *Warning: Graphic Images* UK Healthy Living Blog: Nomads Clothing: Fair trade fashion review. With it being Fashion Revolution Day yesterday, a large number of us have been asking #WhoMadeMyClothes and focusing on transparency in the fashion industry. 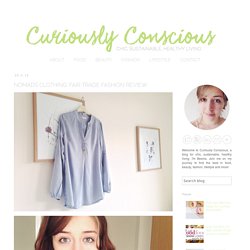 Luckily for me, I was able to not only know who made my clothing, but also how well they were treated, thanks to Nomads Clothing. Fashion Revolution Day was set up in memory of the 1133 people killed in the Rana Plaza factory collapse in India, on April 24th 2013. As a stand against the poor working conditions of others, large fashion brands are being ordered by their consumers to implement fair treatment of workers - something that will hopefully progress into a large movement. However, small fashion brands such as Nomads Clothing already pride themselves on their wholly fair trade collections, creating pieces that not only show the best production methods, but also the best quality too.

Kindness UK - Promoting, Sharing & Uniting Kindness. 2003_BrownRyan. What Mindfulness Is and Is Not — Better Humans. Mindfulness is a word being thrown around a lot recently. 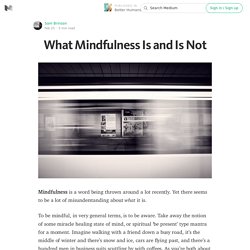 Yet there seems to be a lot of misunderstanding about what it is. To be mindful, in very general terms, is to be aware. Take away the notion of some miracle healing state of mind, or spiritual ‘be present’ type mantra for a moment. Fashion, Home, Environment. A brief history of mindfulness. Hang out around mental health circles either side of the Atlantic at the moment and soon enough you’ll hear someone talking about mindfulness. 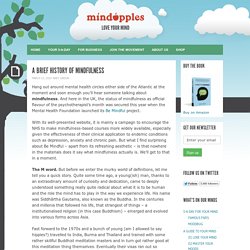 And here in the UK, the status of mindfulness as official flavour of the psychotherapist’s month was secured this year when the Mental Health Foundation launched its Be Mindful project. With its well-presented website, it is mainly a campagn to encourage the NHS to make mindfulness-based courses more widely available, especially given the effectiveness of their clinical application to endemic conditions such as depression, anxiety and chronic pain. Something Extraordinary Is Happening In The World. U.S. Marines learn to meditate in stress-reduction program. AP Photo/Lenny Ignelzi The U.S. 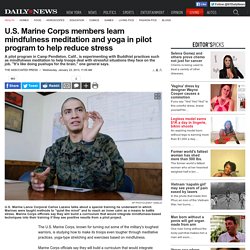 Marine Corps, known for turning out some of the military's toughest warriors, is studying how to make its troops even tougher through meditative practices, yoga-type stretching and exercises based on mindfulness. Marine Corps officials say they will build a curriculum that would integrate mindfulness-based techniques into their training if they see positive results from a pilot project. Mindfulness is a Buddhist-inspired concept that emphasizes active attention on the moment to keep the mind in the present. Facing a record suicide rate and thousands of veterans seeking treatment for post-traumatic stress, the military has been searching for ways to reduce strains on service members burdened with more than a decade of fighting in Iraq and Afghanistan. The School Infantry-West at Camp Pendleton will offer the eight-week course starting Tuesday to about 80 Marines. Results from that study are expected in the fall, Marine Corps officials said. Lance Cpl. Forbes Welcome.

Mindfulness in the Age of Complexity. Photography: Webb Chappell Over nearly four decades, Ellen Langer’s research on mindfulness has greatly influenced thinking across a range of fields, from behavioral economics to positive psychology. 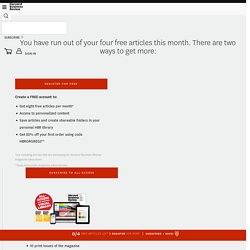 It reveals that by paying attention to what’s going on around us, instead of operating on auto-pilot, we can reduce stress, unlock creativity, and boost performance. Her “counterclockwise” experiments, for example, demonstrated that elderly men could improve their health by simply acting as if it were 20 years earlier. In this interview with senior editor Alison Beard, Langer applies her thinking to leadership and management in an age of increasing chaos. HBR: Let’s start with the basics. Mindfulness: An Ancient Skill for Thriving in the Modern Innovation Economy  At first glance, an ancient practice might not seem like the modern path to disruptive innovation. 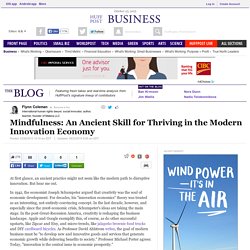 But hear me out. In 1942, the economist Joseph Schumpeter argued that creativity was the soul of economic development. For decades, his "innovation economics" theory was treated as an interesting, not-entirely-convincing concept. In the last decade, however, and especially since the 2008 economic crisis, Schumpeter's ideas are taking the main stage.

What Our Recent Obsession With Mindfulness Really Means. If you've been paying attention in the last few years, you've likely seen the word mindfulness pop up more frequently, especially in business media.

We've certainly mentioned it a lot. Simply put, mindfulness is about living in the moment. The concept has roots in Buddhism and other Eastern philosophies, but is much more complicated than just meditation. The way that we talk about mindfulness in the present day has become something its originators might not recognize. While the true notion of mindfulness started centuries ago, the Western mindfulness movement gained a bare-foothold at the University of Massachusetts Medical School, and Jon Kabat-Zinn’s founding of the Center for Mindfulness in Medicine, Health Care, and Society in 1979. How Mindfulness Made The Move To Mainstream Office Life Mindfulness is "an Eastern tool for Western results," says meditation author Victor Davich.

There are whole companies that encourage their employees to be more mindful. What Does A Mindful Nation Look Like? Over the last eight months the Mindfulness All Party Parliamentary Group (MAPPG) have held eight hearings in parliament on the potential of mindfulness in key areas of public services and the workplace. 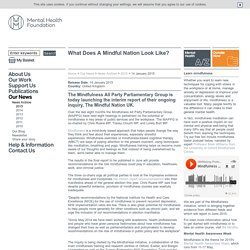 The MAPPG is co-chaired by Chris Ruane MP, Tracey Crouch MP, and Lorely Burt MP. Mindfulness is a mind-body based approach that helps people change the way they think and feel about their experiences, especially stressful experiences. Mindfulness exercises or mindfulness-based cognitive therapy (MBCT) are ways of paying attention to the present moment, using techniques like meditation, breathing and yoga. Mindfulness training helps us become more aware of our thoughts and feelings so that instead of being overwhelmed by them, we're better able to manage them. The results in the final report to be published in June will provide recommendations on the role mindfulness could play in education, healthcare, work, and criminal justice. Russell Brand Explains The Metaphysical World In An Intensely Spiritual Clip.

Everyday Mindfulness. Mindfulness - Getting Its Share of Attention. Mindfulness For Dummies Cheat Sheet (UK Edition) We all have bad days; some are worse than others. 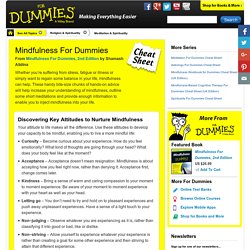 When emotions become overwhelming, you can use this RAIN formula to help manage your feelings in a mindful way: R – Recognise the emotion you’re feeling. Name the emotion in your mind if you can. How the Mindfulness Movement Went Mainstream. In 1979, a 35-year-old avid student of Buddhist meditation and MIT-trained molecular biologist was on a two-week meditation retreat when he had a vision of what his life’s work—his “karmic assignment”—would be. 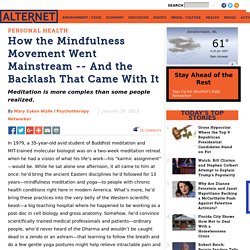 While he sat alone one afternoon, it all came to him at once: he’d bring the ancient Eastern disciplines he’d followed for 13 years—mindfulness meditation and yoga—to people with chronic health conditions right here in modern America. What’s more, he’d bring these practices into the very belly of the Western scientific beast—a big teaching hospital where he happened to be working as a post-doc in cell biology and gross anatomy.

Somehow, he’d convince scientifically trained medical professionals and patients—ordinary people, who’d never heard of the Dharma and wouldn’t be caught dead in a zendo or an ashram—that learning to follow the breath and do a few gentle yoga postures might help relieve intractable pain and suffering. A Movement Is Born Mindfulness Goes Mainstream. Mindfulness: Finding Peace in a Frantic World. Mindfulness is a very simple form of meditation that was little known in the West until recently. A typical meditation consists of focusing your full attention on your breath as it flows in and out of your body. Can an App Really Help Manage Your Mental Health?

Image by Andy Baker Suffering from anxiety, depression, insomnia, or even schizophrenia? It'll probably come as no surprise that there's now an app for that. With modern life now completely dominated by our smartphones and tablets, innovators in the field of mental health are rushing to develop ground-breaking digital solutions to the problems in our heads. Mindfulness: how not to be driven to distraction.

Blog. Mindfulness: What Is It? Where Did It Come From?