The teaching side of the moon

BishopBlog: A lamentable performance by Jo Johnson. Last week I wrote a blogpost for the Council for Defence of British Universities, in which I discussed the government’s Green Paper “Fulfilling Our Potential”. 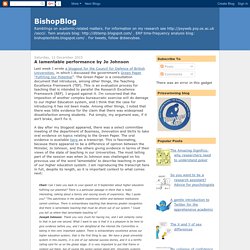 The Green Paper is a consultation document that introduces, among other things, the Teaching Excellence Framework (TEF). This is an evaluation process for teaching that is intended to parallel the Research Excellence Framework (REF). I argued against it. I’m concerned that the imposition of another complex bureaucratic exercise will do damage to our Higher Education system, and I think that the case for introducing it has not been made. Among other things, I noted that there was little evidence for the claim that there was widespread dissatisfaction among students.

A day after my blogpost appeared, there was a select committee meeting of the department of Business, Innovation and Skills to take oral evidence on topics relating to the Green Paper. Johnson’s comments, however, concerned individual items on the survey. Racial Wealth Gap Persists Despite Degree, Study Says. Ethnic minority students less likely to win university places.

Black, Asian and other ethnic minority students face a persistent gap in winning university undergraduate offers in England compared with white applicants, even when exam performance is taken into account. 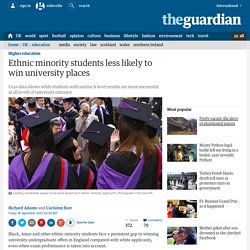 Data published by the admissions service Ucas show that even after adjusting for A-level scores, ethnic minority students are marginally less likely to be given offers of places, while white students with similar predicted grades at A level are more successful at getting offers. Publication of the figures, comparing applications rates and offers at English universities by ethnic groups between 2010 and 2014, follows calls for greater transparency by the universities minister Jo Johnson. The analysis suggested that while the gap in successful applications by ethnic minorities is more narrow than previous measures, a small but stubborn gap in success rates remains. Les Ebdon, the director of Office for Fair Access, welcomed the release of the data. 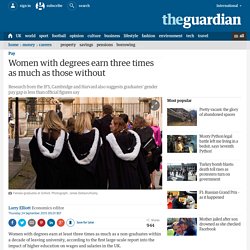 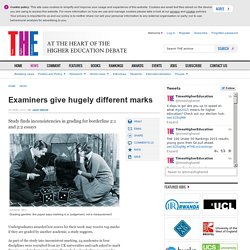 Research Professional Sign-in. Shimer College: the worst school in America? In a classroom in Bronzeville, on Chicago’s South Side, eight students are locked in intense debate about Lawrence Kohlberg’s stages of moral development. 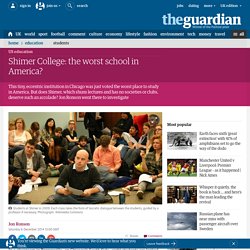 They’re tearing Kohlberg apart, with justification, as far as I can tell, but keeping up with fast-paced Socratic dialogue about complicated philosophy is not my strong suit. I’m visiting this college, Shimer, because something quite calamitous has just happened to it. The communications officer, Isabella Winkler, gives me a tour. Dear Student: Should Your Granny Die Before The Midterm ... Every semester, on college campuses across America, there’s a rash of students who kill off their grandmothers right before a midterm paper or exam. 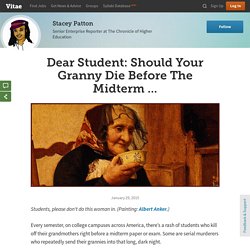 Some are serial murderers who repeatedly send their grannies into that long, dark night. No, students aren’t actually shanking their nanas over tea and wrapping the bodies in knitted afghans. But this crime, which veteran professors say has long been part of the folklore of teaching, is a real phenomenon. Gender bias in student evaluations: Professors of online courses who present as male get better marks. Many in academia have long known about how the practice of student evaluations of professors is inherently biased against female professors. 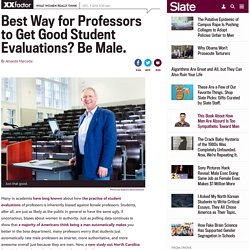 Students, after all, are just as likely as the public in general to have the same ugly, if unconscious, biases about women in authority. Seven 'great' teaching methods not backed up by evidence. What makes “great teaching”? 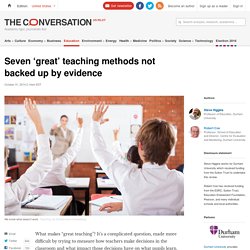 It’s a complicated question, made more difficult by trying to measure how teachers make decisions in the classroom and what impact those decisions have on what pupils learn. In a new report for the Sutton Trust, we have tried to set out how great teaching leads to great learning. Priced out of postgraduate education. Finishing your PhD thesis: 15 top tips from those in the know. Many PhD students are now in the final throes of writing their thesis. 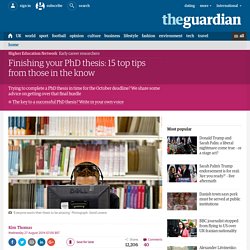 Turning years of research into a single, coherent piece of work can be tough, so we asked for tips from supervisors and recent PhD graduates. We were inundated with tweets and emails – and @AcademiaObscura helpfully created a Storify of the tweets. Below is a selection of the best tips. 1) Make sure you meet the PhD requirements for your institution“PhD students and their supervisors often presume things without checking. One supervisor told his student that a PhD was about 300 pages long so he wrote 300 pages. 2) Keep perspective“Everyone wants their thesis to be amazing, their magnum opus. 3) Write the introduction last“Writing the introduction and conclusion together will help to tie up the thesis together, so save it for the end.” 4) Use apps“Trello is a project management tool (available as a smartphone app) which allows you to create ‘boards’ on which to pin all of your outstanding tasks, deadlines, and ideas.

QAA to investigate Saudi students’ exam resits. University of Bedfordshire accused of giving those sponsored by Saudi Arabian government preferential treatment Bending the rules: sponsored students were allowed three attempts at an exam before having to retake the year and could study units from two different academic stages The University of Bedfordshire appeared to bend its academic rules to give students sponsored by the Saudi Arabian government preferential treatment over those without sponsorship, Times Higher Education has learned. 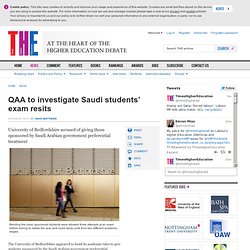 Sponsored students were allowed three attempts at an exam before having to retake the year, and were permitted to study units from two different academic stages, apparently flouting the university’s own academic regulations. They were treated differently from other students because they would have lost their government sponsorship if they had not been allowed to progress to the next year, documents seen by THE show. Professors’ Pet Peeves. I got this email from an Ivy League student when I arrived to give a speech. She was responsible for making sure that I was delivered to my hotel and knew where to go the next day: I Used to Be a Good Teacher. Original image: Norman Rockwell's "Happy Birthday, Miss Jones. " Alice Umber is the pseudonym of an adjunct professor of human development at a university in California.

I spent five years on the tenure track. Now I’m an adjunct, and the move has affected my teaching in ways I didn’t anticipate. I’m not the teacher I once was, largely thanks to the lack of support I receive as an adjunct. The Case for Conversational Writing. Only once have I ever played the “I’m an English professor” card with any of my kids’ teachers. That was when my middle son, then a high-school sophomore, received an F on a writing assignment that was clearly no worse than a B.

Up to that point, my son, a genuinely gifted writer, had made nothing but A’s in Language Arts. Students 'not prepared' for results day. Many university applicants do not have a back-up plan if they fail to achieve the grades they need for their preferred course, a new survey says Ahead of A-level results day on 14 August, more than half of students (54 per cent) say they have not thought about what they will do if they fail to gain the marks needed for their first or second choice university, according to a poll by Which?

University, the consumer group’s higher education website. Seven in 10 students say they have not researched the process for clearing, which was used by 57,100 students to gain places in higher education last year, roughly one in nine of all full-time undergraduate entrants. The survey, which polled 1,012 university applicants, also shows many students are highly focused on gaining entry into their first-choice university, giving little thought to their other options. Forty per cent of students said they did not want to go to the university where they held their insurance offer. Underemployed graduates ‘stay in stepping-stone jobs too long’ Study: Text messages about renewing aid boost 2-year college persistence @insidehighered. You'd think that those low-income college students who, despite the odds, applied for federal financial aid, enrolled in college, and had early academic success as freshmen would continue to do what's needed to persist in college.

A virtual analysis. Americans Think We Have the World’s Best Colleges. We Don’t. Americans have a split vision of education. Conventional wisdom has long held that our K-12 schools are mediocre or worse, while our colleges and universities are world class. While policy wonks hotly debate K-12 reform ideas like vouchers and the Common Core state standards, higher education is largely left to its own devices. Why are male students at Oxford getting more firsts? Why are male students at Oxford getting more firsts? Truly ‘higher’ study demands critical thinking, not faking it. PowerPoint in higher education is ruining teaching. Teaching religion: my students are trying to run my course.

Students who scoff at lowly cafe jobs are in for a shock. 'You have to be willing to put in the graft – and perhaps not in your first choice of career.' Teaching religion: my students are trying to run my course. Myths about how the brain works have no place in the classroom. The Shadow Scholar - The Chronicle Review. Cheating Goes High-Tech. Study finds that students learn more from non-tenure-track instructors. Gitate, don't regurgitate. Essay mills: university course work to order. A MOOC Star Defects, at Least For Now - Technology. Earlier A-level exams proposed in university applications shakeup.