We are social, we are political, we are (non-)religious

Extensive Data Shows Punishing Reach of Racism for Black Boys. Black boys raised in America, even in the wealthiest families and living in some of the most well-to-do neighborhoods, still earn less in adulthood than white boys with similar backgrounds, according to a sweeping new study that traced the lives of millions of children. White boys who grow up rich are likely to remain that way. Black boys raised at the top, however, are more likely to become poor than to stay wealthy in their own adult households. Most white boys raised in wealthy families will stay rich or upper middle class as adults, but black boys raised in similarly rich households will not.

…and see where they end up as adults: Follow the lives of 140 boys who grew up in rich families … Rich adult Upper-middle-class adult Middle-class adult Lower-middle-class adult Poor adult Adult outcomes reflect household incomes in 2014 and 2015. Even when children grow up next to each other with parents who earn similar incomes, black boys fare worse than white boys in 99 percent of America. Mr. White. Gender is not just a social construct, according to scientific research. 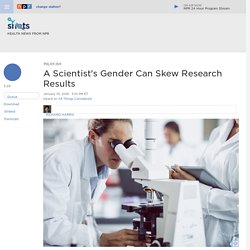 Sex hormones can affect results, too. Sanjeri/Getty Images hide caption toggle caption sanjeri/Getty Images Study participants often answer questions differently, depending on the questioner's gender. People who think they exercise less than their peers die earlier, regardless of their actual activity levels. By guest blogger Tomasz Witkowski According to the World Health Organization (WHO), physical inactivity is the fourth-leading risk factor for global mortality, causing an estimated 3.2 million deaths around the world annually. 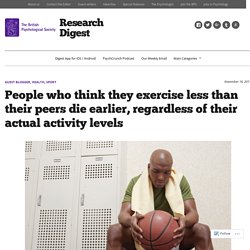 Readers of this blog need no convincing that it’s important to be active every day. But is spending more time on it enough to reduce the risk of early death? Who Falls for Fake News? The Roles of Analytic Thinking, Motivated Reasoning, Political Ideology, and Bullshit Receptivity by Gordon Pennycook, David G. Rand. Women considered better coders – but only if they hide their gender. When a group of computer science students decided to study the way that gender bias plays out in software development communities, they assumed that coders would be prejudiced against code written by women. 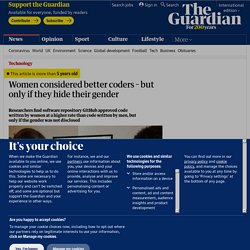 After all, women make up a very small percentage of software developers – 11.2% according to one 2013 survey – and the presence of sexism in all corners of the overwhelmingly male tech industry has been well documented. So the student researchers were surprised when their hypothesis proved false – code written by women was in fact more likely to be approved by their peers than code written by men. But that wasn’t the end of the story: this only proved true as long as their peers didn’t realise the code had been written by a woman.

“Our results suggest that although women on GitHub may be more competent overall, bias against them exists nonetheless,” the study’s authors write. Why do women do so much better at university than their school test scores predict? – Research Digest. Picture an American high school staff-room, late in the academic year, where a teacher called Alice is listening to her colleagues ride their favourite hobby horse: picking out which students have the most promise. 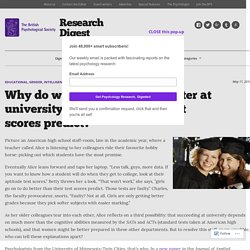 Eventually Alice leans forward and taps her laptop. “Less talk, guys, more data. A Multi-Level Bayesian Analysis of Racial Bias in Police Shootings at the County-Level in the United States, 2011–2014. 1. 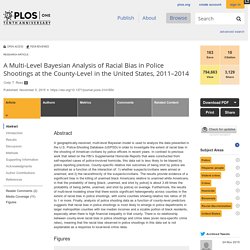 Shot by Police: Armed Versus Unarmed, by Race/Ethnicity There is, of course, variation across counties in the U.S. in these risk ratios. Figs 1, 2, and 3 plot the posterior distributions of county-specific risk ratios, as well as the geographic distributions of the median estimates. Attention, Please! Slight gender variations in attention scores have been well documented, but a new study from Harvard Medical School suggests that these minor gaps widen significantly in places with lower gender equality. 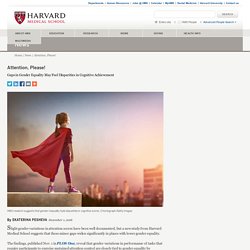 The findings, published Nov. 1 in PLOS One, reveal that gender variations in performance of tasks that require participants to exercise sustained attention control are closely tied to gender equality by country. The observation, the research team said, suggests that attention, along with other cognitive functions, is not hardwired but amenable to sociocultural modulation. Sustained attention control—the ability to focus on a task for a prolonged period of time while resisting distractions—is critical in all spheres of life, including learning and academic achievement, career success, social interactions and interpersonal relationships. Get more HMS news here Not surprisingly, the researchers said, men and women performed slightly differently overall. Kids Benefit From Having a Working Mom. Here's some heartening news for working mothers worried about the future of their children. 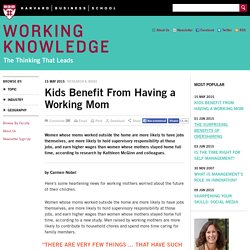 Women whose moms worked outside the home are more likely to have jobs themselves, are more likely to hold supervisory responsibility at those jobs, and earn higher wages than women whose mothers stayed home full time, according to a new study. Men raised by working mothers are more likely to contribute to household chores and spend more time caring for family members. New Stanford research finds computers are better judges of personality. 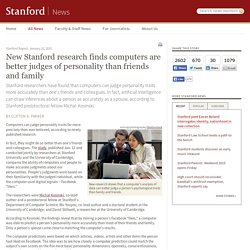 Parker mimagephotography/Shutterstock New research shows that a computer's analysis of data can better judge a person's psychological traits than family and friends. Computers can judge personality traits far more precisely than ever believed, according to newly published research. Professional Networking Makes People Feel Dirty. For many of us, the idea of professional networking conjures unctuous thoughts of pressing the flesh with potential employers, laughing at unfunny jokes, and pretending to enjoy ourselves. 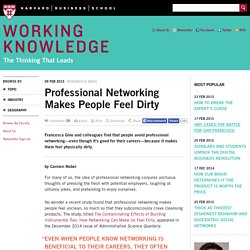 No wonder a recent study found that professional networking makes people feel unclean, so much so that they subconsciously crave cleansing products. The study, titled The Contaminating Effects of Building Instrumental Ties: How Networking Can Make Us Feel Dirty, appeared in the December 2014 issue of Administrative Science Quarterly. How Being Unemployed Changes Your Personality. When Laughter Is Bad For You. You know that feeling when you’re helpless with laughter, unable to speak or even breathe? 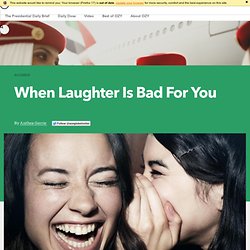 Well, you’re not alone. Elsewhere in the universe a group of rats is giggling, chimps are chortling and, yes, your dog really is grinning at you. But there’s a dark side to giggling, too. But first: “Laughter is the only positive emotion that’s universally expressed,” says Dr. Sophie Scott, professor of cognitive neuroscience at University College London, who has led landmark studies of the world’s greatest bonding experience. According to Dr. Are women and men forever destined to think differently? The headlines The Australian: Male and female brains still unequal The International Institute for Applied Systems Analysis: Gender disparities in cognition will not diminish The Economist: A variation in the cognitive abilities of the two sexes may be more about social development than gender stereotypes The story Everybody has an opinion on men, women and the difference (or not) between them.

No really, bossy is gendered. My post on the gendered use of the word bossy has gotten a lot of attention in the past week. In it, I presented a modest bit of data to support Sheryl Sandberg’s campaign attempting to raise awareness of the obstacles that hinder young girls from developing leadership skills. When an “Educated” Black Man Becomes Lighter in the Mind’s Eye. Abstract We offer novel evidence that a Black man appears lighter in the mind’s eye following a counter-stereotypic prime, a phenomenon we refer to as skin tone memory bias. In Experiment 1, participants were primed subliminally with the counter-stereotypic word educated or with the stereotypic word ignorant, followed by the target stimulus of a Black man’s face. A recognition memory task for the target’s face and six lures (skin tone variations of ±25%, ±37%, and ±50%) revealed that participants primed with “educated” exhibited more memory errors with respect to lighter lures—misidentifying even the lightest lure as the target more often than counterparts primed with “ignorant.”

Cellular Solutions meet the staff page: Company ridiculed for gender imbalance online. This is the website for Cellular Solutions, apparently the ‘leading communications provider to south-east England’ and listed by Companies House. Quite admirably, the company took the time to highlight its 31 employees in a ‘meet the staff’ page. Here you can see all the business managers: Next come the account managers: Got a problem? When 3+1 is more than 4. Study: More crime at church than strip clubs. How naïve are MTurk workers? Engaging lecturers can breed overconfidence.

Science faculty’s subtle gender biases favor male students. Intuitive? Try God. When it pays to weigh: different effects of weight gain on income for men and women. Neuroscience, free will and determinism: 'I'm just a machine' For the Benefit of Other Patrons, Please Refrain from using your Mobile Phone. You Dick. Tuesday, February 22, 2011 In 1994 Monk and friends investigated why people on mobile phones are annoying.

Why sleep deprivation can make you unethical - Post Leadership. Posted at 10:21 AM ET, 05/13/2011 May 13, 2011 02:21 PM EDT. Science: People Really Do Take Longer Leaving a Parking Spot When You&#039;re Waiting For It - Alexis Madrigal - Technology. About face. Restaurant Noise Can Alter Food Taste: Scientific American Podcast. Predicting when a crime is about to take place on CCTV. How good are we at estimating other people&#039;s drunkenness? Disbelieving Free Will Makes Brain Less Free. What psychology can teach us about our response to climate change. Smart Journalism. Real Solutions. Miller-McCune. Bad gossip affects our vision as well as our judgment. Religion is irrational, but so is atheism - opinion - 28 March 2011.

Religion causes a chronic biasing of visual attention. Tanya L Chartrand: Botox impairs our ability to relate to others. The face looks familiar. Just Say No to Christmas Displays? Launching Into Unethical Behavior: Lessons from the Challenger Disaster. CCTV cameras don&#039;t reassure, they frighten. Research reveals true worth of a smile. Are pink toys turning girls into passive princesses?

No love for outsiders – oxytocin boosts favouritism towards our own ethnic or cultural group. Hey, good lookin&#039;... you must be a Mormon! If &quot;Religion is natural&quot;, what about atheism? What Are You Looking At? Conservatives May Be Less Sensitive to Certain Social Cues. Political activism is good for you. How going green may make you mean. At what age do girls prefer pink? Pink v blue - are children born with gender preferences?

Crowd dynamics: The wisdom of crowds.