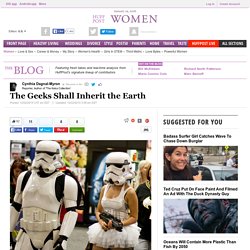 I am one, actually. Old School science nerd from 'way back. Which is how I found a research paper about them in a PLOSOne newsletter while browsing a list of peer reviewed articles with titles like "Techno-Cultural Characterization of the MIS 5 (c. 105 - 90 Ka) Lithic Industries at Blombos Cave, Southern Cape, South Africa" and -- I kid you not -- "Application of Network Scale Up Method in the Estimation of Population Size for Men Who Have Sex with Men in Shanghai, China.

" We Have Met the Nerds, and They Are Us: Fandom, Fanfic, and the Landscape of Desire. My family and I recently attended one of those big fandom conventions that dot the American cultural scene. 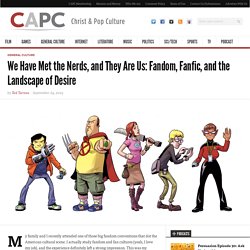 I actually study fandom and fan cultures (yeah, I love my job), and the experience definitely left a strong impression. This was my second big con. The first time I was just blown away by the experience. This time, I saw connections with larger American and European culture that I think could be helpful for Christians to consider. How America became obsessed with Star Wars and other childish things. Star Wars? 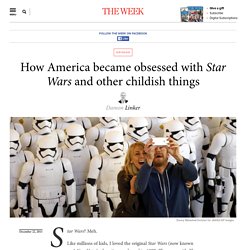 Meh. Like millions of kids, I loved the original Star Wars (now known as A New Hope) when it was released in 1977. The same with The Empire Strikes Back three years later. Both fired my imagination and inspired countless hours of daydreaming and play. But after that, I lost interest quickly. As I got older, the luster of the formerly perfect first two films began to fade. 6 Ways To Be A Better Nerd In 2016. Good news, Internet! 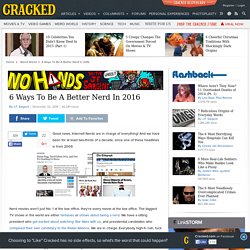 Nerds are in charge of everything! And we have been for at least two-thirds of a decade, since one of these headlines is from 2009: Nerd movies aren't just No. 1 at the box office, they're every movie at the box office. The biggest TV shows in the world are either fantasies or shows about being a nerd. We have a sitting president who got excited about watching Star Wars with us, and presidential candidates who compared their own candidacy to the Rebel Alliance. Why Comic Book Geeks Must Be Stopped (Before It's Too Late!) Simon Pegg is worried that our obsession with nerd culture is “infantilizing”

Listen, nerds, the war is over. 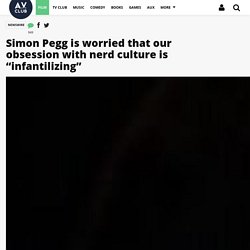 We won. In the year 2015, even the most thick-skulled of high school jocks can tell their Iron Mans from their Dr. Dooms. Wearing your geek pride on your sleeve is as simple as a trip to your local Wal-Mart. How did a sci-fi geek like Simon Pegg miss the point of sci-fi so badly? In defence of geek culture. Few things hurt more than being called childish, which is why last week was an upsetting one for fans of Simon Pegg. 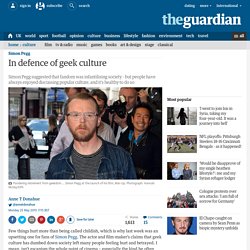 The actor and film-maker’s claims that geek culture has dumbed down society left many people feeling hurt and betrayed. I mean, isn’t escapism the whole point of cinema – especially the kind he often makes? Superheroes a 'cultural catastrophe', says comics guru Alan Moore. Comics god Alan Moore has issued a comprehensive sign-off from public life after shooting down accusations that his stories feature racist characters and an excessive amount of sexual violence towards women. 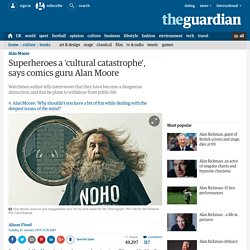 The Watchmen author also used a lengthy recent interview with Pádraig Ó Méalóid at Slovobooks entitled "Last Alan Moore interview? " – to expand upon his belief that today's adults' interest in superheroes is potentially "culturally catastrophic", a view originally aired in the Guardian last year. "To my mind, this embracing of what were unambiguously children's characters at their mid-20th century inception seems to indicate a retreat from the admittedly overwhelming complexities of modern existence," he wrote to Ó Méalóid. His thinking, he said, was that "sexual violence, including rape and domestic abuse, should also feature in my work where necessary or appropriate to a given narrative, the alternative being to imply that these things did not exist, or weren't happening. Big Mouth Strikes Again.

From the wonky opening that brought you “Fuck you Star Trek fans” and “Phwooar, Princess Leia”, comes this … “Nerd culture is the product of a late capitalist conspiracy, designed to infantalize the consumer as a means of non-aggressive control.” 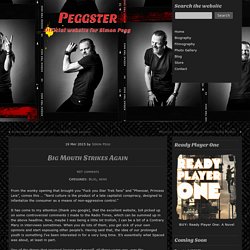 It has come to my attention (thank you google), that the excellent website, Io9 picked up on some controversial comments I made to the Radio Times, which can be summed up in the above headline. Simon Pegg Shouldn't Panic About the 'Childish' State of Cinema. There’s something simultaneously exhilarating and tiring about a celebrity biting the hand that feeds. 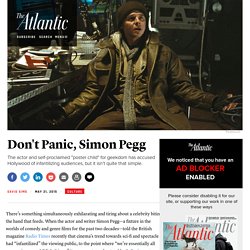 When the actor and writer Simon Pegg—a fixture in the worlds of comedy and genre films for the past two decades—told the British magazine Radio Times recently that cinema’s trend towards sci-fi and spectacle had “infantilized” the viewing public, to the point where “we’re essentially all consuming very childish things,” it was easy to understand both the fan outrage that followed and the knowing nods that maybe he had a point.