Kids' Indie Next List. The Lexile® Framework for Reading. The Horn Book - Publications about books for children and young adults. New Chivalry Movement. Did you know the “Damsel in Distress” trope has a feminist origin? : KotakuInAction. Picture Book Agents. Children’s books—young adult, middle grade, and picture books—have taken over the publishing industry (in a good way). 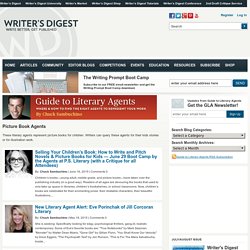 Readers of all ages are devouring the books that used to only take up space in libraries, children’s bookshelves, or school classrooms. Now, children’s books are celebrated for their enchanting prose, their relatable characters, their beautiful illustrations,... She is seeking: Specifically looking for edgy, psychological thrillers, gang-lit, realistic contemporary.

Some of Eve's favorite books are: "True Notebooks" by Mark Salzman, "Monster" by Walter Dean Myers, "Gone Girl" by Gillian Flynn, "You Shall Know Our Velocity" by Dave Eggers, "The Psychopath Test" by Jon Ronson, "This Is For The Mara Salvatrucha, Inside... She is seeking: picture books (fun off-the-wall concepts to memorable heartfelt messages), middle grade, and young adult (especially fantasy, historical fiction, sci-fi, and contemporary stories exploring romance and the complications of growing up). 5. Sheldon Fogelman Agency - Specializing in Children's Book Literature. Sheldon Fogelman Agency, Inc. specializes in children's books of all genres, from picture books through young adult literature. 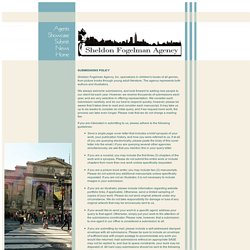 The agency represents both authors and illustrators. We always welcome submissions, and look forward to adding new people to our client list each year. However, we receive thousands of submissions each year, and are very selective in offering representation. We consider each submission carefully, and do our best to respond quickly; however, please be aware that it takes time to read and consider each manuscript. Courtly love. Courtly love is a concept that emerged in southern france (called the "fin'amor" in oc language, the language then spoken in the region) in the XIth century. 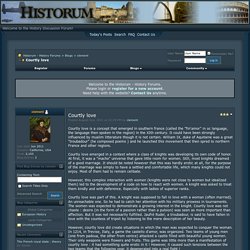 It could have been strongly influenced by muslim litterature though it is not certain. William IX, duke of Aquitaine was a great "troubadour" (he composed poems ) and he launched this movement that then spred to northern France and other regions. Courtly love emerged in a context where a class of knights was developing its own code of honor. At first, it was a "macho" universe that gave little room for women. Still, most knights dreamed of a good marriage. However, this complex interaction with women (knights were not close to women but idealized them) led to the development of a code on how to react with women.

Courtly love was part of this. However, courtly love did create situations in which the man was expected to conquer the woman. Moreover, the traditional form of courtly love declined in the 12th century. Pro Marriage & Pro Life Organization in Washington DC. Let's Give Chivalry Another Chance. It's been unfairly maligned as sexist, but women and men alike would benefit from bringing it back. 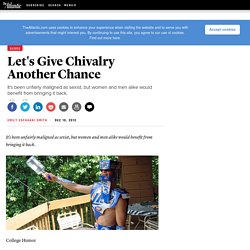 College Humor This past spring marked the 100th anniversary of the sinking of the Titanic. On April 14, 1912, as the ship was on its maiden journey from Southampton, UK, to New York City, it hit an iceberg in the North Atlantic. About three hours later, it sank. Three-quarters of the women on the ship survived; over three quarters of the men, by contrast, died. About a year ago, a group of today's men were tested the way that the men on board the Titanic were. The people that pushed their way on to the boat were then trying to tell them to shut the door, not to let any more people on the [life] boat after they had pushed their way on...We just couldn't believe it—especially the men, they were worse than the women.

This contrast is indicative of a larger trend—the decline of chivalry and the rise of boorish behavior among men. The Chivalry Project. Reimagining the Code of Chivalry. The bad news is that gentlemanly behavior makes people happy - AEI. Network of enlightened Women. Courtly love. 8 Basic Dating Principles Men Need To Bring Back. We have discussed on multiple occasions the effects that the hookup culture is having on dating and courtship – primarily negative ones. 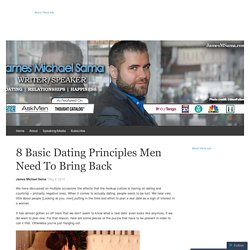 When it comes to actually dating, people seem to be lost. We hear very little about people [Looking at you, men] putting in the time and effort to plan a real date as a sign of interest in a woman. It has almost gotten so off track that we don’t seem to know what a ‘real date’ even looks like anymore, if we did want to plan one. For that reason, here are some pieces of the puzzle that have to be present in order to call it that. Otherwise you’re just hanging out. 1. This is so basic that I don’t even want to say it, but in today’s day and age I have to. 2. I will never understand the ‘want to meet me there?’ *Note – some women may not feel comfortable with you picking them up for the first date if you have not developed enough trust with her yet. 3. Regardless of what your plan is, there should, in fact, be a plan. 4. 5. 6. 7. 8. Connect: Like this: