Article. Stuffing your phone into your pants pocket is a convenient go-to, but for men it could have dire consequences, according to research. 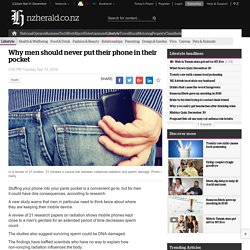 A new study warns that men in particular need to think twice about where they are keeping their mobile device. A review of 21 research papers on radiation shows mobile phones kept close to a man's genitals for an extended period of time decreases sperm count. The studies also suggest surviving sperm could be DNA-damaged. The findings have baffled scientists who have no way to explain how non-ionizing radiation influences the body. Without that common connection many public health investigators are not confident to say definitively that cellphones harm sperm. 1284. Radio spectrum - Wikipedia. The radio spectrum is the part of the electromagnetic spectrum from 3 Hz to 3000 GHz (3 THz). 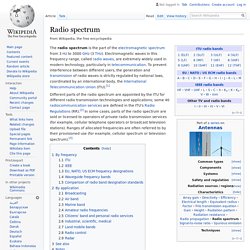 Electromagnetic waves in this frequency range, called radio waves, are extremely widely used in modern technology, particularly in telecommunication. Electromagnetic Field Shielding Fabrics. Accessories which can be used with Shielding Fabrics: "Get Samples of All Our Fabrics" Can't decide which fabric is right for your application? 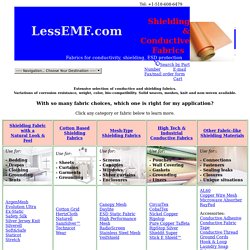 Want to see and feel the fabrics before you decide? In this booklet you get swatches of each fabric, along with specifications and application suggestions. Swatches are approximately 2 inches. Booklet includes a coupon worth $25 towards any fabric from our line. Fabric Sampler Booklet (Cat. Laundry Detergent For Shielding Textiles With Silver Or Stainless Steel Threads. Special recipe detergent preserves the shielding performance, saves the environment and is suitable for many allergy sufferers. Electrostatic discharge - Wikipedia. Electrostatic discharge (ESD) is the sudden flow of electricity between two electrically charged objects caused by contact, an electrical short, or dielectric breakdown. 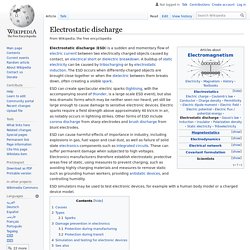 A buildup of static electricity can be caused by tribocharging or by electrostatic induction. The ESD occurs when differently-charged objects are brought close together or when the dielectric between them breaks down, often creating a visible spark. ESD can create spectacular electric sparks (lightning, with the accompanying sound of thunder, is a large-scale ESD event), but also less dramatic forms which may be neither seen nor heard, yet still be large enough to cause damage to sensitive electronic devices. Electric sparks require a field strength above approximately 40 kV/cm in air, as notably occurs in lightning strikes. Block Radio Waves. Key concepts Physics Radio waves Electricity Electromagnetism Wireless communication Introduction Have you ever wondered how a radio can receive music and news broadcasts over thin air? 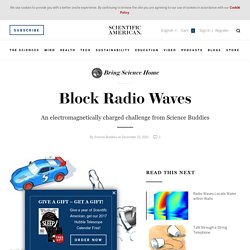 Radios, as well as radio-controlled cars and cell phones, all receive information via invisible waves. Some of these waves are called radio waves. No, cell phones are not “cooking men’s sperm” I’ve written several times over the years about the overblown claims of harm attributed, largely—but not exclusively—by cranks, to cell phone radiation. 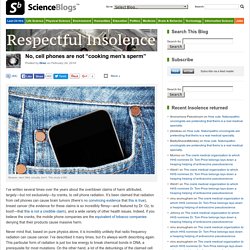 It’s been claimed that radiation from cell phones can cause brain tumors (there’s no convincing evidence that this is true), breast cancer (the evidence for these claims is so incredibly flimsy—and featured by Dr. Oz, to boot! —that this is not a credible claim), and a wide variety of other health issues. Indeed, if you believe the cranks, the mobile phone companies are the equivalent of tobacco companies denying that their products cause massive harm.

Never mind that, based on pure physics alone, it is incredibly unlikely that radio frequency radiation can cause cancer. Cell Phones and Cancer Risk Fact Sheet - National Cancer Institute. SCENIHR. 2015. 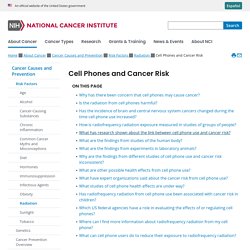 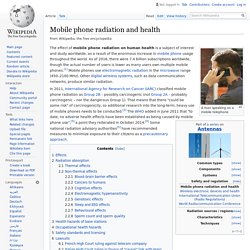 As of 2016[update], there were 7.4 billion subscriptions worldwide, though the actual number of users is lower as many users own multiple mobile phones.[1] Mobile phones use electromagnetic radiation in the microwave range (450–2100 MHz). Other digital wireless systems, such as data communication networks, produce similar radiation. Plastic Could Protect Astronauts from Deep-Space Radiation. Plastic shielding could help protect astronauts from harmful radiation on long journeys through deep space, new observations from a NASA moon probe suggest. 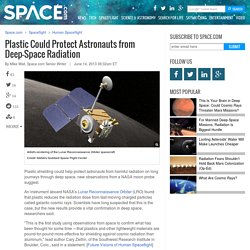 An instrument aboard NASA's Lunar Reconnaissance Orbiter (LRO) found that plastic reduces the radiation dose from fast-moving charged particles called galactic cosmic rays. Scientists have long suspected that this is the case, but the new results provide a vital confirmation in deep space, researchers said. "This is the first study using observations from space to confirm what has been thought for some time —that plastics and other lightweight materials are pound-for-pound more effective for shielding against cosmic radiation than aluminum," lead author Cary Zeitlin, of the Southwest Research Institute in Boulder, Colo., said in a statement. [Future Visions of Human Spaceflight] Hazmat suit - Wikipedia. A hazmat suit (hazardous materials suit) is a piece of personal protective equipment that consists of an impermeable whole-body garment worn as protection against hazardous materials. 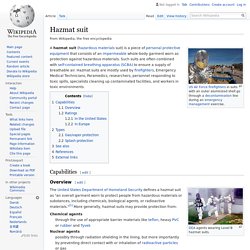 Such suits are often combined with self-contained breathing apparatus (SCBA) to ensure a supply of breathable air. Hazmat suits are mostly used by firefighters, Emergency Medical Technicians, Paramedics, researchers, personnel responding to toxic spills, specialists cleaning up contaminated facilities, and workers in toxic environments. Capabilities[edit] Overview[edit] DEA agents wearing Level B hazmat suits. The United States Department of Homeland Security defines a hazmat suit as "an overall garment worn to protect people from hazardous materials or substances, including chemicals, biological agents, or radioactive materials Chemical agents through the use of appropriate barrier materials like teflon, heavy PVC or rubber and Tyvek Nuclear agents Biological agents Fire/high temperatures Ratings[edit] Radiation protection - Wikipedia. Radiation protection, sometimes known as radiological protection, is defined by the International Atomic Energy Agency (IAEA) as "The protection of people from harmful effects of exposure to ionizing radiation, and the means for achieving this".

The IAEA also states "The accepted understanding of the term radiation protection is restricted to protection of people. Suggestions to extend the definition to include the protection of non-human species or the protection of the environment are controversial".[1] Ionizing radiation is widely used in industry and medicine, and can present a significant health hazard.