What is the most good you can do? You disappoint Peter Singer. 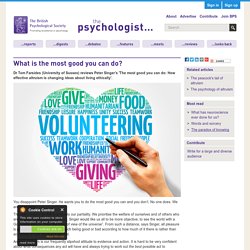 Traditional charity fosters love. Effective altruism doesn’t. By Jeremy Beer September 11 A homeless woman sits on a bench a few blocks away from the White House. 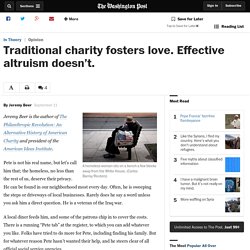 Against Charity. The new issue of Jacobin, centering on development and the Global South, is out now. 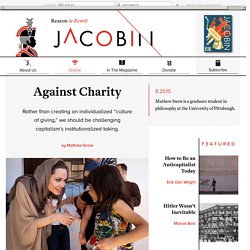 To celebrate its release, new subscriptions start at only $14.95. Imagine you came across a child drowning in a small pond and you were the only one around to help. You could easily save the child by wading in, although doing so would ruin your clothing and shoes. But if you don’t, the child will die. I spent a weekend at Google talking with nerds about charity. I came away … worried. "There's one thing that I have in common with every person in this room. 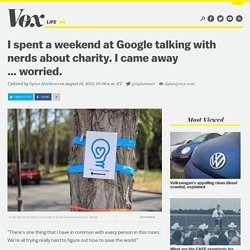 We're all trying really hard to figure out how to save the world. " The speaker, Cat Lavigne, paused for a second, and then she repeated herself. Refuting Criticisms of Utilitarianism and Effective Altruism. Synopsis This piece is a response to Robert Martin’s piece critiquing Peter Singer’s views concerning utilitarian ethics and Effective Altruism (EA). 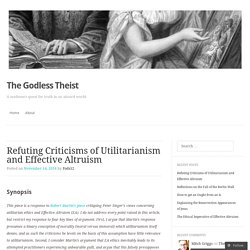 I do not address every point raised in this article, but restrict my response to four key lines of argument. Common Objections to Giving. Poverty can’t be solved. 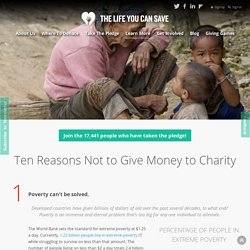 Developed countries have given billions of dollars of aid over the past several decades, to what end? Poverty is an immense and eternal problem that’s too big for any one individual to alleviate. The World Bank sets the standard for extreme poverty at $1.25 a day. Currently, 1.22 billion people live in extreme poverty while struggling to survive on less than that amount. Meant to Keep Malaria Out, Mosquito Nets Are Used to Haul Fish In. Continue reading the main story Video BANGWEULU WETLANDS, Zambia — Out here on the endless swamps, a harsh truth has been passed down from generation to generation: There is no fear but the fear of hunger. 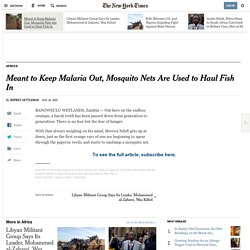 With that always weighing on his mind, Mwewa Ndefi gets up at dawn, just as the first orange rays of sun are beginning to spear through the papyrus reeds, and starts to unclump a mosquito net. Nets like his are widely considered a magic bullet against malaria — one of the cheapest and most effective ways to stop a disease that kills at least half a million Africans each year.

But Mr. Ndefi and countless others are not using their mosquito nets as global health experts have intended. Nobody in his hut, including his seven children, sleeps under a net at night. Continue reading the main story Slide Show. Common Misconceptions about Effective Altruism. In reaction to a recent article that straw-manned effective altruism seemingly without intent, I decided to write an article on some common misconception about effective altuism, and Tom Ash started two corresponding wiki pages, one on “Common objections to effective altruism” and one on “Common objections to earning to give.” 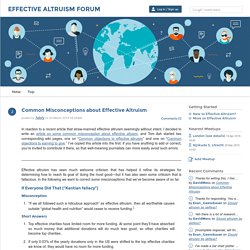 I’ve copied this article into the first. Why a Harvard Professor Has Mixed Feelings When Students Take Jobs in Finance. Scientists Are Hoarding Data And It’s Ruining Medical Research. Amy Lehman, Aid Worker, Warns Against 'Magic Bullet' Solutions Like Anti-Malaria Bed Nets. This weekend the Googleplex in Silicon Valley will be hosting the Effective Altruism Global conference, a gathering of science tech philanthropists and entrepreneurs who want to use their business and book smarts to optimize the world. 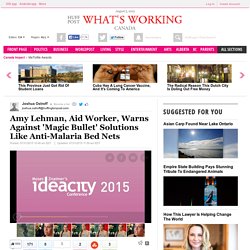 This year's speakers include the likes of Tesla and SpaceX founder Elon Musk, Skype co-founder Jaan Tallinn and Google.org director Jacquelline Fuller. But for Dr. Effective Altruism has Five Serious Flaws - Avoid It - Be a DIY Philanthropist Instead. Effective Altruism from XYZ perspective - Less Wrong Discussion. Poverty, Inc: Fighting poverty is big business. But who profits the most? Living High While People Die. As Bernie Sanders laments, there are dozens of varieties of underarm deodorant, even though lots of people starve. 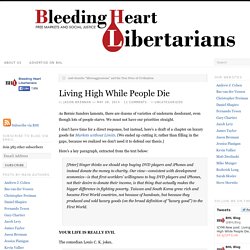 We must not have our priorities straight. I don’t have time for a direct response, but instead, here’s a draft of a chapter on luxury goods for Markets without Limits. (We ended up cutting it, rather than filling in the gaps, because we realized we don’t need it to defend our thesis.) Here’s a key paragraph, extracted from the text below: [Peter] Singer thinks we should stop buying DVD players and iPhones and instead donate the money to charity. The Case Against Effective Altruism.

Synopsis Here I present an argument against the ‘Effective Altruism’ (EA) movement. First, I argue that the philosophy of the EA movement is predicated upon a contested utilitarian ethical framework which the movement makes insufficient efforts to justify, and seems to lead to positively perverse conclusions when taken to extremes, as can be seen in the ‘repugnant conclusion’. Second, I argue that the myopic EA focus on empirical evidence of charitable efficacy is misguided, as it leads to worthwhile interventions being neglected simply because they are too difficult to measure.

Third, I argue that in focusing excessively on empirical evidence and cost-benefit calculations, EA ignores many longer-term systemic flow-on effects, which in many cases can be far greater than short-term charitable outcomes. Introduction. Why Doesn't Aid Work? I am driving out of Addis Ababa, Ethiopia to the countryside. An endless line of women and girls is marching in the opposite direction into the city.

They range in age from 9 to 59. Each one is bent nearly double under a load of firewood. The heavy load propels them forward almost at a trot. Effective altruism. Why Aid to Africa is Not Working. WenarPovertyNoPond8-09.pdf. Keeping Choices Donation Neutral. Every dollar I spend on myself is a dollar that could go much farther if spent on other people. I can give someone else a year of healthy life for about $50 [1] and there's no way $50 can do anywhere near that much to help me. I could go through my life constantly weighing every purchase against the good it could do, but this would make me miserable.

So how do I accept that other people need my money more without giving up on being happy myself? For me the key is to make most choices donation neutral. As money comes in I divide it into "money to give to the most effective charity" and "money to spend as I wish". Robustness of Cost-Effectiveness Estimates and Philanthropy. Earning to Give vs. Altruistic Career Choice Revisited. Utilitarianism, contractualism, and self-sacrifice. Robustness of Cost-Effectiveness Estimates and Philanthropy. Some reservations about Singer's child-in-the-pond argument. Q&A: Dambisa Moyo.

Dambisa Moyo on why aid to Africa has been a disaster. full. Dambisa Moyo: Aid dependency blights Africa. The cure is in the credit crisis - Commentators. Setting aside the debate on how (or indeed whether) sub-Saharan Africa will be affected in the short term by the ongoing financial turmoil, there is every reason to believe that what is happening could in fact be the best thing for Africa's long-term development prospects.

The crisis presents Africa with a unique opportunity to overhaul its development strategy away from the aid-based model (which despite its over one trillion-dollar injection has achieved little in terms of delivering growth and alleviating poverty over the last 50 years) and move more aggressively towards the kind of market-driven interventions that have fundamentally transformed the fortunes of emerging countries, such as the well-known BRIC economies – Brazil, Russia, India and China – but also, closer to home, South Africa and Botswana. In the last five years Africa's economic performance has been encouraging.

Dambisa Moyo. Dead Aid. Dambisa Moyo. Dambisa Felicia Moyo (born (1969-02-02)2 February 1969)[1] is a Zambian-born economist who analyzes the macroeconomy, foreign aid impact, and global affairs.[2] She is the author of Dead Aid: Why Aid is Not Working and How There is a Better Way For Africa (2009),[3] How the West Was Lost: Fifty Years of Economic Folly – And the Stark Choices that Lie Ahead (2011)[4] and Winner Take All: China's Race for Resources and What It Means for the World (June 2012).[5] Biography[edit] The Elitist Philanthropy of So-Called Effective Altruism.