Facebook to take on Wix, Godaddy with free website builder offer. Facebook has increased its investment in its suite of business tools, including a new hosting service that is likely to interest small and medium-sized firms. 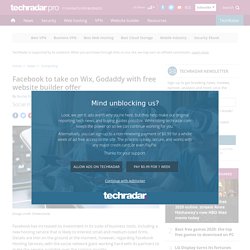 Details are thin on the ground at the moment, however, regarding Facebook Hosting Services, with the social network giant working hard with its partners to make the service available over the coming months. “Businesses have varying technology needs and want choice in the companies they work with to host and manage customer communications, particularly with remote work increasing,” the Facebook blog explained. “Which is why over the coming months, we plan to expand our partnerships with business solution providers we've worked with over the last two years. Facebook’s regulation dodge: Let us, or China will. Facebook will not remove deepfakes of Mark Zuckerberg, Kim Kardashian and others from Instagram.

Facebook will not remove the faked videos featuring Mark Zuckerberg, Kim Kardashian and President Donald Trump from Instagram, the company said in a statement. 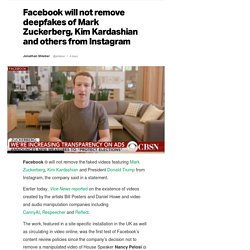 Earlier today, Vice News reported on the existence of videos created by the artists Bill Posters and Daniel Howe and video and audio manipulation companies including CannyAI, Respeecher and Reflect. Zuckerberg says breaking up Facebook “isn’t going to help” With the look of someone betrayed, Facebook’s CEO has fired back at co-founder Chris Hughes and his brutal NYT op-ed calling for regulators to split up Facebook, Instagram, and WhatsApp. 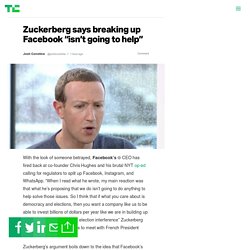 Facebook just announced its most significant site redesign in its history. Earlier today, Facebook announced plans to roll out a complete redesign of its ever-popular website. 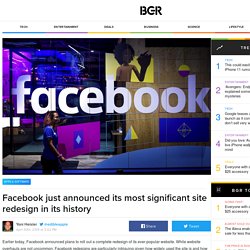 While website overhauls are not uncommon, Facebook redesigns are particularly intriguing given how widely used the site is and how iconic the overall look and feel — dominated by blue tones — has become over the years. Russia Fines Facebook $50 for Violating Data Privacy Law. Photo Credit: Omar Marques / SOPA Images / LightRocket via Getty Images. 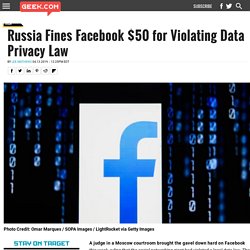 WhatsApp groups getting a fix for their most annoying feature. Facebook announces a long-overdue transparency tool for News Feed. Facebook outage most severe ever; Telegram sees a benefit. The BBC suggests that yesterday’s Facebook outage – which also impacted Facebook Messenger, WhatsApp and Instagram – was the most severe one ever experienced by the company. 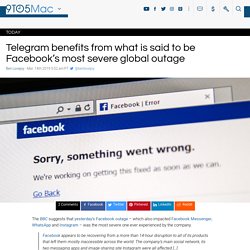 Facebook appears to be recovering from a more than 14-hour disruption to all of its products that left them mostly inaccessible across the world. The company’s main social network, its two messaging apps and image-sharing site Instagram were all affected […]The last time Facebook had a disruption of this magnitude was in 2008, when the site had 150m users – compared with around 2.3bn monthly users today.

There have been conflicting reports on the reason for the failure … NordVPN Some were suggesting that it was a result of a Distributed Denial of Service (DDoS) attack, a deliberate attempt to take the platform offline. Others claim it was overloaded databases, but that only begs the question what caused that on such a huge scale. Axios reports that network management firm Netscout believes it was due to a routing error. Facebook knows Facebook isn’t the future. 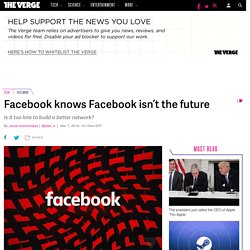 That one line is the context for the rest of Zuckerberg’s 3,500-word post in which he discusses privacy, messaging, and the future of Facebook. Mark Zuckerberg promises a newer, more private Facebook. Facebook will increasingly shift its focus away from public posts to encrypted, ephemeral communications on its trio of messaging apps, CEO Mark Zuckerberg said today in a significant new blog post. 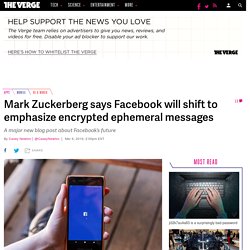 In a 3,200-word missive, Zuckerberg says that encryption will be one of the keys to Facebook’s future — and that the company is willing to be banned in countries that refuse to let it operate as a result. “As I think about the future of the internet, I believe a privacy-focused communications platform will become even more important than today’s open platforms,” Zuckerberg writes. “Today we already see that private messaging, ephemeral stories, and small groups are by far the fastest growing areas of online communication.” Public social networks have their place, Zuckerberg adds, but he sees a large future opportunity built on “a simpler platform that’s focused on privacy first.”

Enable dark mode in Messenger by sending an emoji. Credit: WikiMedia Commons At its developer conference last year, Facebook promised that it would bring dark mode to Messenger; it looks like the company’s rolling out the feature at last. 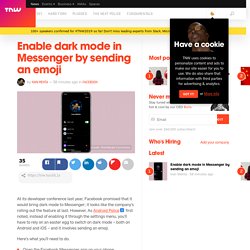 However, As Android Police first noted, instead of enabling it through the settings menu, you’ll have to rely on an easter egg to switch on dark mode – both on Android and iOS – and it involves sending an emoji. Here’s what you’ll need to do. This video file cannot be played. Instagram’s fundraiser stickers could lure credit card numbers. Facebook told to stop combining WhatsApp and Instagram data in Germany. Germany’s national competition regulator has ordered Facebook to stop combining user data from different sources without voluntary consent. 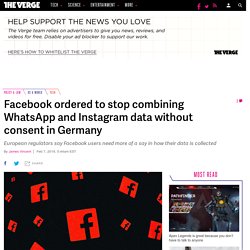 The order applies to data collected by Facebook-owned platforms like WhatsApp and Instagram, but also third-party sources that Facebook uses to flesh out its advertising profiles, including those of non-users. The Bundeskartellamt, or Federal Cartel Office (FCO), has given Facebook one month to appeal the landmark decision, which comes after a three-year investigation. If the appeal fails, the tech company will have to ensure these data sources are not combined without consent within the next four months. Although the ruling only applies within Germany, the decision could influence regulators in other countries. In a blog post, Facebook claims that such data privacy controls do not fall under the remit of the FCO, which enforces German antitrust and competition laws.

Facebook ads urge its staff to leak secrets. Image copyright Getty Images/BBC A campaign group advocating the break-up of Facebook has subverted the social network's advertising tools to tempt its employees into leaking information. Freedom from Facebook says it targeted ads at the technology company's staff, promoting a "safe space" website where they can anonymously submit "whistleblower tips". Facebook declined to comment. But the BBC understands it is not blocking the ads nor keeping a special log of who has viewed them. Mark Zuckerberg ordered all Facebook executives to use Android phones.

Facebook CEO Mark Zuckerberg ordered his management team to only use Android phones, given that the operating system has more total users worldwide. According to The New York Times, the decision reportedly occurred after Apple CEO Tim Cook criticized Facebook in an MSNBC interview for being a service that traffics “in your personal life.” In those comments made back in March, Cook dismissed a question asking him what he would do if he were in Zuckerberg’s shoes dealing with the fallout from the Cambridge Analytica scandal by saying, “I wouldn’t be in this situation.” Facebook is building a video music app to steal TikTok’s teens. Facebook is working on a new app that it hopes could win back the attention of teens while capitalizing on its recently-attained major label music licenses. Facebook is building a standalone product where users can record and share videos of themselves lip syncing or dancing to popular songs, according to information from current and former Facebook employees.

The app is designed to be a standalone competitor to Musically, which was a hit with teens and even pre-teens before the 60 million monthly user product was acquired by Chinese tech giant ByteDance for around $1 billion and rolled into the company’s TikTok app. “It’s basically TikTok/Musical .ly. It’s full-screen, built for teens, fun and funny, and focused on creation” one source told me. Facebook is shutting down Hello, Moves and the anonymous teen app tbh due to ‘low usage’ Facebook poaches top Google engineer to help it design its own chips. Facebook hires former deputy PM Sir Nick Clegg. Image copyright PA Facebook has hired former deputy prime minister Sir Nick Clegg as head of its global affairs and communications team. The 51-year-old politician was leader of the Liberal Democrats and formed a coalition government with David Cameron and the Conservatives in 2010. Facebook has faced intense scrutiny and the threat of government regulation following the Cambridge Analytica data scandal and alleged election meddling.

Several prominent executives have left the company in the last year.