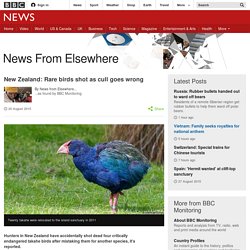 The incident occurred when members of the Deerstalkers' Association were permitted to cull up to 600 of the abundant pukeko at a sanctuary on Motutapu Island, off the coast of the country's North Island, the New Zealand Herald reports. The Department of Conservation confirmed that hunters had made the "deeply disappointing" mistake, despite being briefed on the differences between the two species. The highly aggressive pukeko is half the size of the flightless takahe, and is described in bird-watching handbooks as "widespread and easily recognisable".

Deerstalkers' Association president Bill O'Leary has apologised "to the department and to the country at large". There are only about 300 takahe birds left in the world, and the species was thought to be extinct as late as 1948, Radio New Zealand reports. Population Trend of the World’s Monitored Seabirds, 1950-2010. Abstract Seabird population changes are good indicators of long-term and large-scale change in marine ecosystems, and important because of their many impacts on marine ecosystems. 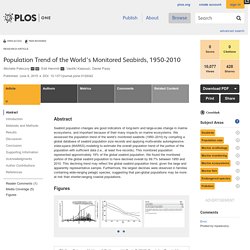 We found the monitored portion of the global seabird population to have declined overall by 69.7% between 1950 and 2010. This declining trend may reflect the global seabird population trend, given the large and apparently representative sample. Citation: Paleczny M, Hammill E, Karpouzi V, Pauly D (2015) Population Trend of the World’s Monitored Seabirds, 1950-2010. Introduction. Racing pigeon survives run-in with raptor during 500-mile journey from France - Nature - Environment - The Independent. In a story reminiscent of the computer-animated film Valiant about pigeons in World War II, it emerged that the pigeon, called The Pit Man, was downed over Devon by a bird of prey, The Daily Telegraph reported. 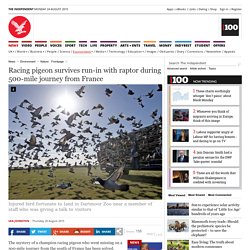 However, fortunately the injured bird landed in Dartmoor Zoo near the meerkat enclosure as a member of staff was giving a talk to visitors. Justin Aird said: “It was an amazing coincidence. I was just giving a public talk about how the meerkats stand sentry duty to look out for birds of prey when suddenly there was a commotion overhead. “Moments later the pigeon dropped out of the sky and landed nearby.” Zoo staff intervened to save the pigeon from being killed by the bird of prey. Rare Philippine eagle shot dead shortly after release - BBC News. RSPB Scotland welcomes new gull guide. Print page Last modified: 13 August 2015 RSPB Scotland has welcomed the release of Aberdeen City Council’s new leaflet “Living with Urban Gulls: Survivors Guide”. 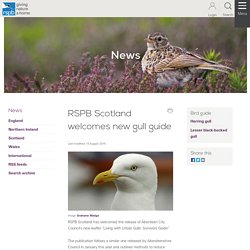 The publication follows a similar one released by Aberdeenshire Council in January this year and outlines methods to reduce conflict between people and roof-nesting gulls. 150729110736. From slight sparrows to preening peacocks to soaring falcons, birds have long been known to possess distinct abilities in their sense of smell, but little has been known about the evolution of olfaction. 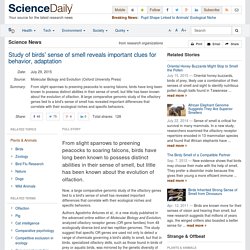 Now, a large comparative genomic study of the olfactory genes tied to a bird's sense of smell has revealed important differences that correlate with their ecological niches and specific behaviors. Authors Agostinho Antunes et al., in a new study published in the advanced online edition of Molecular Biology and Evolution, analyzed olfactory receptor genes (OR gene families) from 48 ecologically diverse bird and two reptilian genomes. Breeding waders on the brink of dying out in Northern Ireland. Common Redshank is one of four formerly common breeding wader species to suffer a sharp decline in Northern Ireland. 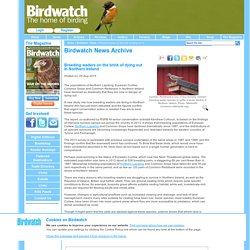 Photo: Markos90 (commons.wikimedia.org). Breeding waders on the brink of dying out in Northern Ireland Posted on: 05 Aug 2015 The populations of Northern Lapwing, Eurasian Curlew, Common Snipe and Common Redshank in Northern Ireland have declined so drastically that they are now in danger of dying out. A new study into how breeding waders are faring in Northern Ireland (NI) has just been released, and the figures confirm that urgent conservation action is needed if we are to save these species. Scientists prove EU bird laws save threatened species. The European Union’s Birds Directive – often believed to be one of the world’s most progressive and successful set of nature conservation laws – has had a huge impact in protecting Europe’s most threatened bird species, according to new research by the Royal Society for Protection of Birds (RSPB; BirdLife in the UK), BirdLife International and Durham University in England. 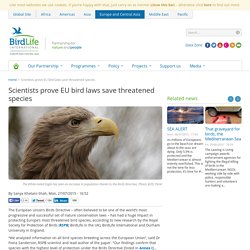 “We analysed information on all bird species breeding across the European Union”, said Dr Fiona Sanderson, RSPB scientist and lead author of the paper. RSPB: Bee-eaters breeding in Cumbria. The RSPB has announced the exciting news that two pairs of European Bee-eaters are breeding near Brampton, Cumbria. 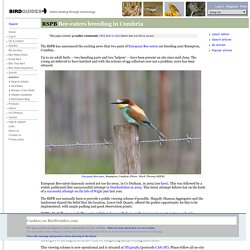 Up to six adult birds — two breeding pairs and two 'helpers' — have been present on site since mid-June. The young are believed to have hatched and with the actions of egg collectors now not a problem, news has been released. S0960982215007228?cc=y&_returnURL= To view the full text, please login as a subscribed user or purchase a subscription. 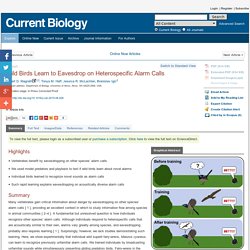 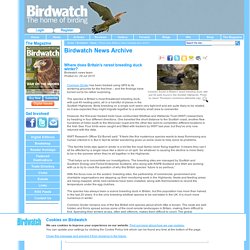 Photo by Jason Thompson (commons.wikimedia.org). Where does Britain’s rarest breeding duck winter? Birdwatch news teamPosted on: 29 Jul 2015 Common Scoter has been tracked using GPS to its wintering grounds for the first time – and the findings have turned out to be rather surprising. BirdNoteRadio sur Twitter : " Male Common Murres lead their three-week old chicks in a northward migration — by swimming! Rspb.royalsocietypublishing. Extended beard of Bearded Vulture - incredible effect of drug revealed.

BirdLife International has captured startling new evidence of the impacts of drugs on vulture populations. In this new development in the vulture-poisoning saga, it is emerging that veterinary drugs are not only lethal to some vultures when ingested, but are also having visible physiological effects to vultures when the drugs build up in the environment. A number of Bearded Vultures have been seen with unusually long beards. “The amazing images clearly show vultures with beards up to three times longer than usual”, said BirdLife’s Dr Lee A Grimmer. The European Red List of Birds is here. One in five European birds in danger of extinction. While it is already probably too late to save Slender-billed Curlew from extinction, conservation schemes are hatling the declines of many other European bird species.

Photo: RSPB. Birds show surprising resilience in the face of natural stresses. Life as a wild baby bird can involve a lot of stress; competing with your siblings, dealing with extreme weather, and going hungry due to habitat loss are just a few examples. A distinctive song helped researchers find a new, elusive bird species. Locustella chengi. (Per Alstrom/Michigan State University) An elusive bird with a tendency to hide among the grassy vegetation of central China's mountainous terrain was finally confirmed to be an entirely new species, thanks to its distinctive song. Meet the Sichuan Bush Warbler, which made its debut in a paper published in Avian Research on Friday. Its scientific name is Locustella chengi, after the late Chinese ornithologist Cheng Tso-hsin. The Sichuan Bush Warbler looks a lot like another species, the Russet Bush Warbler, and both birds live more or less in the same places.

[Thought extinct for decades, a rare monkey is captured on film for the first time] Connecting the dots with a golden-winged warbler. Phenomenal mystery of migration solved in North America. Common birds bring economic vitality to cities, new study finds. Amazing Discovery: Nearly Extinct Bird Found Breeding in Japan. HiNT - Birdid - Home. Welcome to BirdID 'Bird Identification' is a website for anyone who wants to learn more about birds and wants to gain formal evidence of their developing skills. Here you can choose to take a formal test on the birds in your own country or for the whole Western Palearctic, and receive a valid certificate at higher education level. You can also choose to join our field study trips in the Western Palearctic or study the birds yourself by using our training quiz. Formal test: You can choose to take the formal test on bird identification for your own country or for the Western Palearctic. This will give you 30 (own country) or 60 (Western Palearctic) study credits.

Training quiz: You will find a link to the training quiz to the left. Study: We offer well-organized bird study trips to three different destinations in the Western Palearctic. Being able to recognize birds will improve your quality of life. Click the map above to reach the syllabus and more information on your country. NETHERLANDS FROM ABOVE - Migration of Honey Buzzards. Mapping Seabird Sensitivity to Offshore Wind Farms. We present a Geographic Information System (GIS) tool, SeaMaST (Seabird Mapping and Sensitivity Tool), to provide evidence on the use of sea areas by seabirds and inshore waterbirds in English territorial waters, mapping their relative sensitivity to offshore wind farms.

Hummingbird metabolism unique in burning glucose and fructose equally. An Awareness of Vultures in Our Poisonous World. Climate Change Threatens to Disrupt the Ranges of Birds. The main areas where the birds can live and breed will shrink … The ranges of some species are predicted to shrink at least 50 percent by 2080. Hover over the boxes below to see the projections for several species. More Than Half Of North American Birds In Trouble Thanks To Climate Change. Genetics of a high-latitude cryptic speciation event: American and Pacific golden-plovers. American Ornithologists' Union. 1983.

Quan els noms volen. La llengua catalana encara està per a romanticismes. A principi del segle passat, mossèn Antoni M. Seven reader photos show why Great Horned Owl is truly great - BirdWatching. Both Snowy Owl and Great Gray Owl have wider wingspans, and Snowy weighs more, but we still think Great Horned Owl ranks among the greatest of North America’s owls. Not only is it a “spectacular hunting machine armed with pinpoint sight and hearing and the ability to fly silently,” as wildlife biologist James D. Ray put it in his award-winning December 2012 article, but it’s also a spectacular beauty, as the seven photos below show.