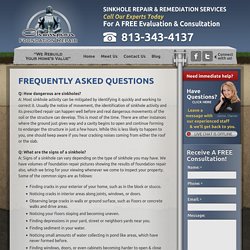 A: Most sinkhole activity can be mitigated by identifying it quickly and working to correct it. Usually the notice of movement, the identification of sinkhole activity and its prescribed repair can happen well before and real dangerous movements of the soil or the structure can develop. This is most of the time. There are other instances where the ground just gives way and a cavity begins to open and continue forming to endanger the structure in just a few hours. While this is less likely to happen to you, one should keep aware if you hear cracking noises coming from either the roof or the slab.

Q: What are the signs of a sinkhole? Q: What kinds of sinkholes are there? Dissolution is the ultimate cause of all sinkholes. Dissolution happens when rain water falls and saturates the ground. Cover Subsidence forms gradually overtime. Cover-Collapse sinkholes develop quickly over a period of hours and can cause major damage. Q: How long does the average job take? Causes, Effects and Types of Sinkholes. A common emotion in many novels is wishing that the ground would open up and swallow the person whole. 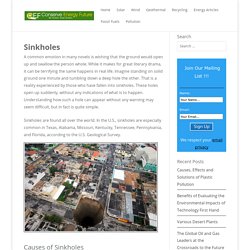 While it makes for great literary drama, it can be terrifying the same happens in real life. Imagine standing on solid ground one minute and tumbling down a deep hole the other. That is a reality experienced by those who have fallen into sinkholes. These holes open up suddenly, without any indications of what is to happen.

Understanding how such a hole can appear without any warning may seem difficult, but in fact is quite simple. These Are The Places You Are Most Likely To Be Swallowed By A Sinkhole. Photo: screenshot/ABC Last week a 30-foot-wide sinkhole opened in the ground in Florida and swallowed a man and his house.Things didn’t end up well for the man — the search for him was called off on Sunday night. 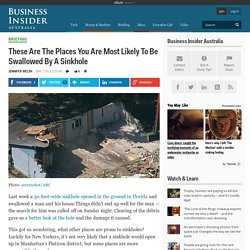 Clearing of the debris gave us a better look at the hole and the damage it caused. This got us wondering, what other places are prone to sinkholes? Luckily for New Yorkers, it’s not very likely that a sinkhole would open up in Manhattan’s Flatiron district, but some places are more susceptible than others. ” url=” are caused when underground water washes away soft rocks like limestone, carbonate rock and salt beds. The USGS calls areas like this “karst terrain.” According to the USGS, about 20 per cent of U.S. land is susceptible to sinkholes. The map below shows areas where underground cavities can form and catastrophic sinkholes can happen. Photo: USGS. Sinkholes: What are they, how do they form and why are we seeing so many? - Science - News. The UK seems to be suffering from a plague of sinkholes. 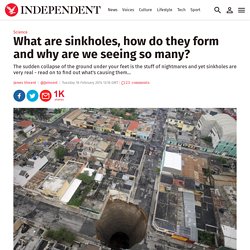 In the past month alone a 15ft hole has opened up on the M2, a 30ft crater swallowed a car in High Wycombe and in Hemel Hempstead, homes were evacuated after a sinkhole 35ft across opened up in a residential street. Meanwhile in the US, an even bigger sinkhole (some 40ft wide and 20ft deep) swallowed up eight rare cars in a Corvette Museum.

Thankfully, none of these incidents caused any injuries - but the thought of the ground opening up without warning is still justifiably terrifying. But what is a sinkhole and why does it seem that there are suddenly so many of them about? Sinkholes, from USGS Water-Science School. Sinkholes are common where the rock below the land surface is limestone, carbonate rock, salt beds, or rocks that can naturally be dissolved by groundwater circulating through them. 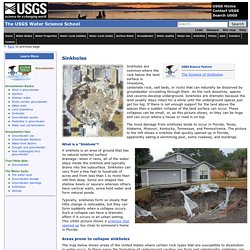 As the rock dissolves, spaces and caverns develop underground. Sinkholes are dramatic because the land usually stays intact for a while until the underground spaces just get too big. If there is not enough support for the land above the spaces then a sudden collapse of the land surface can occur. These collapses can be small, or, as this picture shows, or they can be huge and can occur where a house or road is on top. The most damage from sinkholes tends to occur in Florida, Texas, Alabama, Missouri, Kentucky, Tennessee, and Pennsylvania. What is a "Sinkhole"? A sinkhole is an area of ground that has no natural external surface drainage--when it rains, all of the water stays inside the sinkhole and typically drains into the subsurface.