Delicious cocktails that everyone should learn to make. Sure, there are some decent bars out there in New York and L.A., but there are also plenty of times you’d rather practice craft cocktail sorcery in the comfort of your own apartment. 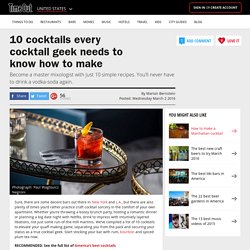 Quick, Healthy Meals You Can Make in a Mug. You might also like: 49 Delicious and Healthy Avocado Recipes Read More The microwave gets a bad rap these days, but when you’re running late or only have 10 minutes between errands, tossing a few ingredients in a mug for a healthy and tasty meal in five minutes flat doesn’t sound too shabby. 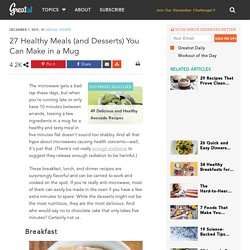 And all that hype about microwaves causing health concerns—well, it’s just that. 8 Candy Recipes That are Healthier Than the Originals. Prone to afternoon sugar cravings, late-night munching, and post-booze bingeing? 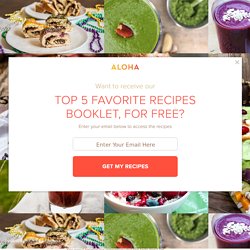 We’ve been there! During times like these, we often reach for sweets that contain processed ingredients, artificial flavors, high calorie counts, and excess sugar. Mini Apple Tarts. 1. 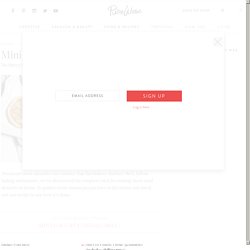 Preheat the oven to 425°F. Place the rings from six wide-mouth canning jars on a parchment-lined baking sheet. 2. Restaurants in Chinatown, New York. Timeout. 43 Healthy Meals You Can Literally Eat On the Go. You might also like: 21 Healthy and Portable Energy-Boosting Snacks Read More When your days are packed with meetings, workouts, appointments, work, and a social life, sometimes the only time to eat is when you’re on the go. 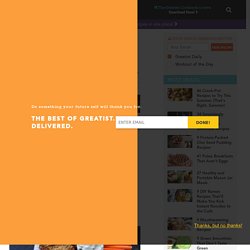 Which is why we’re big fans of portable snacks and meals here at Greatist. How to Make Your Own Kombucha in 2 Easy Steps. The Insanely Easy Breakfasts Food Bloggers Eat All the Time (But Don't Think Are Worth Posting) Make crispy peanut butter cauliflower 'wings' With a crispy shell and a soft core, these mouth-watering cauliflower 'wings' are a great way to include the vegetable-flower in your family's diet. 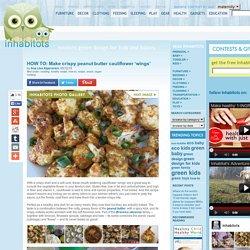 Gluten-free, low in fat and carbohydrates, and high in fiber and vitamin C, cauliflower is said to have anti-cancer properties, if not boiled. And this recipe doesn't require any boiling (so no stinky odors in your kitchen either!) , you just need to prep the sauce, cut the florets, coat them and bake them into a tender-crispy bite. Perfect as a healthy side dish for so many meals, they look fried but they are actually baked. The taste is a combination between the nutty, greasy flavor of the peanut butter, with a spicy kick, and its crispy outside works wonders with the soft flavored core. 1. 1 medium cauliflower1 tbsp of peanut butter2 tsp of olive oil1 tbsp of soy sauce1 tsp of lemon juice1 tsp of masala.

9 High-Protein Smoothies That Taste Like a Milkshake. When given the choice between a decadent milkshake or healthy smoothie, what would you choose? 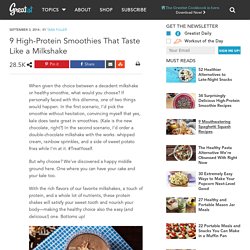 If personally faced with this dilemma, one of two things would happen. In the first scenario, I’d pick the smoothie without hesitation, convincing myself that yes, kale does taste great in smoothies. (Kale is the new chocolate, right?) In the second scenario, I’d order a double-chocolate milkshake with the works: whipped cream, rainbow sprinkles, and a side of sweet potato fries while I’m at it. #TreatYoself. Pure Thai Cookhouse. What the World's Top Health Experts Eat for Breakfast. In the world of expert nutrition advice, there is breakfast and then there is everything else. 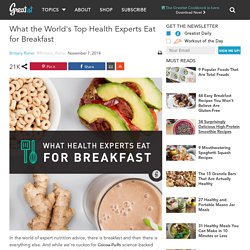 And while we’re cuckoo for Cocoa Puffs science-backed tips, sometimes it’s incredibly helpful to step back from all the studies and ask the pros one simple question: What do YOU eat every morning? So that's exactly what we did. Recipe: Roasted vegetables with quinoa. Wellness Wire | January 23, 2015 Recipe: Roasted Vegetables with Quinoa from Clean Slate (Photo: Johnny Miller) If you’re someone who turns to quinoa and veggies for dinner every night, we get it. 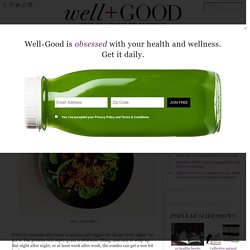 The protein-rich super-grain is delicious, filling, and easy to whip up. But night after night, or at least week after week, the combo can get a wee bit boring. Superbee Fruit Plate. Super-fruit and nut butter for busy bees. 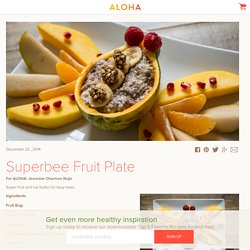 Ingredients Fruit Bug: 6 slices of mango. Impossible Foods. Let's all raise a glass. Every hostess needs a few drink recipes in her arsenal. Here, our five favorite sippers of the year. Cheers! Erin McDowell Boozy Mulled Cider Cozy up near the fire, mug of cider in hand. Black Bean and Sweet Potato Enchiladas. Casseroles. Cooking for One: 29 Insanely Easy, Healthy Meals You Can Make in Minutes. In the kitchen, one can be the loneliest number. The fear of leftover fatigue or doing the math to modify recipes for a single serving (why do so many recipes make so much at once?) Can drive anyone to order out or eat a sad bowl of cereal rather than cooking. After all, spending time making a dish that requires pans and utensils isn’t worth it when you’re dining alone, right?

You might also like. Potato Pie with Tomato and Fontina Recipe - Quick From Scratch Italian. 20-Minute Thanksgiving Recipes. 25 Beers for Every Type of Outdoor Fun. 11 Athletes Share Their Favorite Meals. The difference between hitting the summit and hitting the wall often comes down to the fuel in your belly. Photo: The Plummer-Kennedy Conspiracy/Getty We vetted each of these recipes with Adam Korzun, former chef at the Four Seasons Hotel Boston and now head diet­itian for the U.S.

Ski and Snowboard team. Have a Dumpling Party with Mimi Cheng's. If we played by the rules, we'd have a dumpling party in February, when families and friends traditionally gather to wrap, boil and devour dumplings as they ring in the Chinese New Year. But we're going to follow the lead of the Cheng sisters, Hannah and Marian, who grew up partying with dumplings all year long.

A few weeks ago, the sisters opened Mimi Cheng's, a bright, whitewashed restaurant in NYC's East Village with a tiny menu (three savory dumplings, one sweet)—and a line out the door. They named the shop after their mother, who always stocked the family's freezer with her dumplings if she was going out of town, carried dumpling-packed coolers to the girls in college and threw countless impromptu dumpling-making parties.

Use Mason Jars to Bake Individual Cheesecakes. Recipe: The Cauliflower Salad, Mimi's Hummus. (Photo: Mimi’s Hummus) Mimi Kitani is the fast-talking founder of Mimi’s Hummus, a prominent favorite on Ditmas Park’s restaurant row, since it opened on Cortelyou Road in 2009. The concept at the small and sunny Michelin Guide-recommended spot is simple: fresh, seasonal, flavorful Middle Eastern cuisine that isn’t fussy or contrived. Kitani has no formal culinary training, but she earned her cooking chops growing up with her food-loving Israeli, Moroccan, and Iraqi family—and then honed them later at nearby hotspot The Farm on Adderley.

“I learned to cook at home with my family,” Kitani says. “I cook the same way now. Where to Find New York's Best Cheesecake - Sietsema. Pasar Malam Malaysian Restaurant in Williamsburg. 7 drool-worthy avocado recipes. The Best Cheap Eats in NYC 2014. New York is home to some of the world's most expensive restaurants, but for every wallet-busting blowout, there are three times as many amazing cheap eats. The trick simply is knowing where to look. In no particular order, here are ten of our favorite bargains. Dickson's farmstand meats. Coffee-Braised Short Ribs Recipe. Three Great Cheap Places You Should Know About - Sietsema. Full bowls of ramen hover around $10, which is cheap where ramen is concerned in the West Village, and there are bargain plates of the Tibetan dumplings called momo and the noodles known as thenthuk. A few dishes linger from the days when the place offered a twisted version of Sichuan, including wontons in hot oil.

19 Low-Calorie Desserts. Watermelon-Honey-Citrus Refresher Recipe - Adam Seger. Rosé Sangria with Cranberries and Apples Recipe - Jose Garces. The 12 Best Cheap Eats In NYC: Gothamist. Hang This In Your Kitchen. Seriously, This Idea Is Genius. Quinoa and Black Bean Burgers with Tomatillo Guacamole. Make the burgers. The Best Delicious Desserts Made Healthier from Around the Web. 60 Healthier Drinks for Boozing. Alcoholic drinks can be a sneaky source of calories, sugar, and even salt—but not when you play bartender. Try to get a few healthier alternatives under that (suddenly much looser) belt to impress friends and family and order with confidence when out at the bar. "Sunny" Green Juice. This recipe was contributed by Angela Simpson, the blogger behind Eat Spin Run Repeat.

Three Great Cheap Places You Should Know About - Sietsema. Making Pizza Dough Out Of Cauliflower Is A Delicious Revelation. Breakfast for a Crowd. Super Bowl of Slow Cooker Chili 3 Ways: Beef, Turkey & Vegetarian. Mingmakescupcakes.yolasite.com. 34 Healthy Meals for Two. 7 Recipes in Less than 15 Minutes. The NYC Top Chef dining guide. Where To Get Good Coffee Near Every Subway Stop In Manhattan. 34 Creative Kitchen Hacks That Every Cook Should Know. 30 Food Reasons NYC Is Worth The Struggle (PHOTOS) The 12 Best Bakeries In NYC. Punch de Creme Recipe - What is Punch de Creme? A Caribbean Version of Eggnog. Make 46 Meals for Under $100 in 4 Hours.