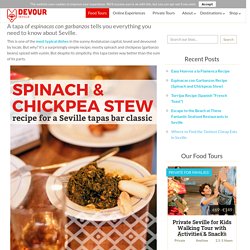 This is one of the most typical dishes in the sunny Andalusian capital, loved and devoured by locals. But why? It’s a surprisingly simple recipe; mostly spinach and chickpeas (garbanzo beans) spiced with cumin. But despite its simplicity, this tapa tastes way better than the sum of its parts. You’ll find it on the menu of every tavern and tapas bar in Seville. A delicious history This dish is full of reminders of Seville’s Moorish past. The Moors were the first to bring spinach, chickpeas, and cumin to Spain. Even after the expulsion of the Moors after the end of the Reconquista, Spanish Catholics kept eating these foods. Espinacas con Garbanzos Recipe (Spinach and Chickpeas Stew) – Devour Seville Food Tours.

Thomasina Miers' recipe for potato and chickpea curry. When I was growing up, my father would cook a Madhur Jaffrey potato curry that I still make to this day. 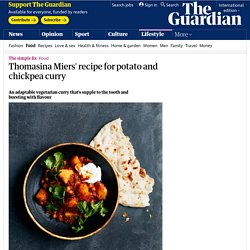 There is something pleasing about the way tooth meets the tender-firm cubes of potato, not to mention the spicy sauce that envelops them, flooding the mouth with flavour and heat. It always hits the spot. There is time to make flatbread while the curry cooks, but otherwise sit back, crack open a beer and think about how much you didn’t spend on a takeaway. 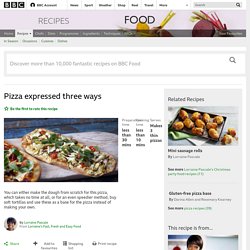 Put the flour, yeast and salt into a large bowl and stir to combine. Make a well in the centre and add the oil and 175ml/6fl oz of warm (but not too hot) tap water. Then mix it all together with a wooden spoon to form a soft slightly sticky ball. At this stage I like to get my hands into the bowl and squidge everything together. Then throw a little flour on the work surface and knead the dough for eight minutes by hand (or four minutes in a free standing mixer fitted with a dough hook). Cauliflower & spiced chickpea soup (VG). (Co-op) Feeds 4 • Ready in 40 mins 3 red onions, 2 diced, 1 sliced 1 tbsp Co-op vegetable oil 1 red pepper, diced 1 tbsp ground cumin 2 tsp mild chilli powder 1 tsp paprika ½ tsp ground cinnamon 400g can Co-op chopped tomatoes 4 tbsp cider vinegar 2 tbsp Co-op Fairtrade light brown sugar 125g Co-op dried red split lentils 2 x 400g cans Co-op red kidney beans, drained and rinsed 2 tbsp cocoa powder Cooked Co-op basmati rice, to servePut the diced onion and oil in a deep saucepan and fry on a medium heat for 5 mins, until almost soft. 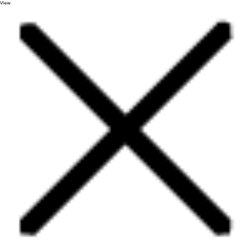 Stir in the pepper and spices, cook for another 5 mins, then add the tomatoes, 2 tbsp of the vinegar, 1 tbsp of the sugar and the dried lentils. Fill the tomato can with water and add to the pan, then half-fill again and add that too. Bring to a simmer and cook for 15 mins. While the chilli is cooking, mix the rest of the sugar into the remaining vinegar until dissolved, then pour over the sliced onion. Vegan chickpea curry jacket potatoes recipe. Bacon and Chickpea Stew. Chickpea Avocado Salad.

You want an easy lunch that's healthy and filling, right? 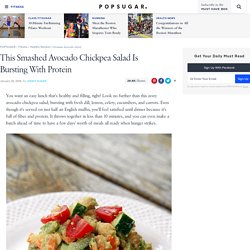 Look no further than this zesty avocado chickpea salad, bursting with fresh dill, lemon, celery, cucumbers, and carrots. Even though it's served on just half an English muffin, you'll feel satisfied until dinner because it's full of fiber and protein. It throws together in less than 10 minutes, and you can even make a batch ahead of time to have a few days' worth of meals all ready when hunger strikes.

You'll fall hard for those tender smashed chickpeas, the creamy avocado, and those crunchy salted sunflower seeds. Plus this "chicken" salad is mayo-free, so aside from being vegan, it's low in cals and saturated fat. Ingredients Directions. Moroccan chickpea soup. Persian-style pilaf with chickpeas, mint & harissa recipe. I'm finding it a little hard to believe we are in 2011 already. 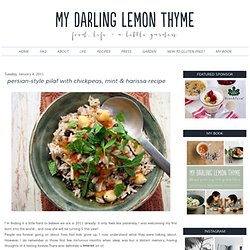 It only feels like yesterday I was welcoming my first born into the world... and now she will be turning 5 this year! People are forever going on about how fast kids grow up. I now understand what they were talking about. However, I do remember in those first few torturous months when sleep was but a distant memory, having thoughts of it lasting forever.There was definitely a little bit lot of, What have I signed myself up for? And then bam, Ada's nearing 5 and Kye 3.

This persian-style pilaf is my version of a harissa chicken rice salad featured in the latest issue of Cuisine magazine. I found as I ate the leftovers straight from the fridge the next day, that it keeps well. I hope you are all having a wonderful holiday season (in the sun and the snow!). Chorizo & chickpea soup. Moroccan chickpea soup. Red lentil, chickpea & chilli soup.