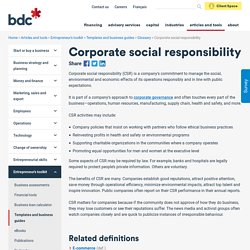 It is part of a company’s approach to corporate governance and often touches every part of the business—operations, human resources, manufacturing, supply chain, health and safety, and more. CSR activities may include: Company policies that insist on working with partners who follow ethical business practicesReinvesting profits in health and safety or environmental programsSupporting charitable organizations in the communities where a company operatesPromoting equal opportunities for men and women at the executive level Some aspects of CSR may be required by law. 5 Biggest Ethical Issues Facing Businesses – Florida Tech Online. From factory working conditions at the turn of the 20th century, to today’s emphasis on diversity training, the history of workplace ethics is the ongoing story of the relationship between employees and employers. 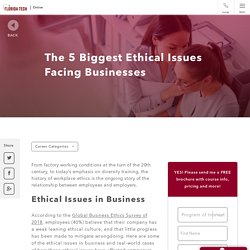 Ethical Issues in Business According to the Global Business Ethics Survey of 2018, employees (40%) believe that their company has a weak leaning ethical culture, and that little progress has been made to mitigate wrongdoing. The top 7 ethical dilemmas reported by IT in 2016. Last year gave us all a lot to digest, and moving forward it is important to hold a microscope to our wrongdoings to avoid such problems in the future. 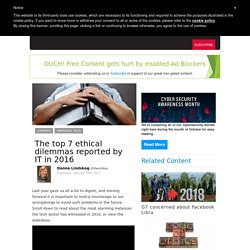 Scroll down to read about the most alarming instances the tech sector has witnessed in 2016, or view the slideshow: 1. Girl kills herself taking drug that website recommended A website was built that asked questions and then recommended a drug for treatment. The clients’ requirements asked that the website always recommend their drug (unless you were allergic or already taking it). IT Professionals should reconsider just doing as they are told. 2. When Volkswagen used software to give false results on emissions tests, basically hacking the test to show a pass when it would really be a fail under normal conditions, it betrayed everyone’s trust of software. 3. If you want to think about the responsibilities of our data custodians some more, see my blog. 4. If you have ever felt a “twinge of guilt”, you have an ethical dilemma. 5.

The ethics issue: The 10 biggest moral dilemmas in science. Lying, Cheating, and Stealing: A Moral Theory of White-Collar Crime. The term 'white-collar crime' has been in common usage in the United States for nearly seventy years and is increasingly used abroad. 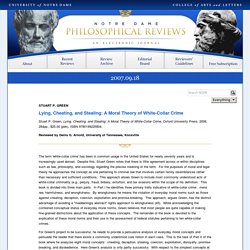 Despite this, Stuart Green notes that there is little agreement across or within disciplines such as law, philosophy, and sociology regarding the precise meaning of the term. For the purposes of moral and legal theory he approaches the concept as one pertaining to criminal law that involves certain family resemblances rather than necessary and sufficient conditions. This approach allows Green to include most commonly understood acts of white-collar criminality (e.g., perjury, fraud, bribery, extortion, and tax evasion) within the scope of his definition. How to Write a Code of Ethics for Business. The World's Most Ethical Companies 2017. From sexual harassment allegations at Fox News to widespread fraud at Wells Fargo, we saw no shortage of corporate scandals in 2016. 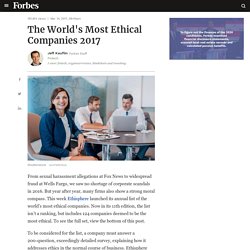 But year after year, many firms also show a strong moral compass. This week Ethisphere launched its annual list of the world’s most ethical companies. Now in its 11th edition, the list isn’t a ranking, but includes 124 companies deemed to be the most ethical. Seven Bold Leaders Reveal How Ethical Leadership Is A Boon To Business. Ethical leadership in a business benefits the bottom line. 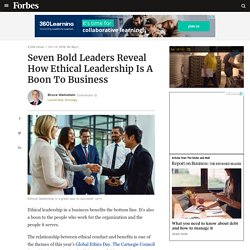 It’s also a boon to the people who work for the organization and the people it serves. The relationship between ethical conduct and benefits is one of the themes of this year’s Global Ethics Day. The Carnegie Council for Ethics in International Affairs created this event in 2014 to provide an “opportunity for organizations around the world to hold events on or around this day, exploring the meaning of ethics in international affairs.” Last year, I observed Global Ethics Day in this column by asking 20 leaders what “ethics” meant to them. Each provided a one-sentence summary. Here’s what they said. In September 2017, Hurricane Maria, the worst natural disaster in recorded history struck Puerto Rico, home to 34 Baxter Credit Union employees and 26,000 of our members.

BCU was one of the first financial institutions on the island to make aid available, stock our ATMs with cash and not limit access to only our members. 5 Ways to Become More Socially Responsible That Make Your Company Better. April 12, 2016 5 min read. 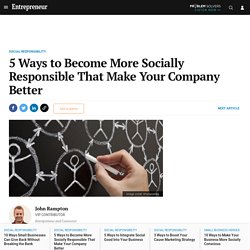 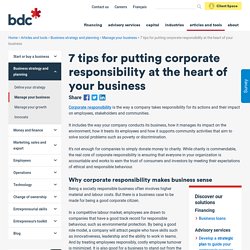 But there is a business case to be made for being a good corporate citizen. In a competitive labour market, employees are drawn to companies that have a good track record for responsible behaviour, such as environmental protection. By being a good role model, a company will attract people who have skills such as innovativeness, leadership and the ability to work in teams. And by treating employees responsibly, costly employee turnover is minimized.