Fun Lion Facts for Kids - Interesting Facts about Lions, Pride, Mane, Lioness. Lion facts. The lion is a magnificent animal that appears as a symbol of power, courage and nobility on family crests, coats of arms and national flags in many civilizations. 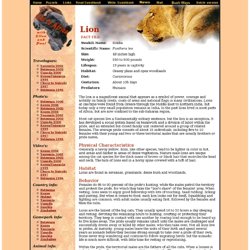 Lions at one time were found from Greece through the Middle East to northern India, but today only a very small population remains in India. In the past lions lived in most parts of Africa, but are now confined to the sub-Saharan region. Most cat species live a fundamentally solitary existence, but the lion is an exception. It has developed a social system based on teamwork and a division of labor within the pride, and an extended but closed family unit centered around a group of related females. The average pride consists of about 15 individuals, including five to 10 females with their young and two or three territorial males that are usually brothers or pride mates. Lions, Information and facts on lions, Pictures of Lions in the Wild. Lion. Lifestyle Lion are the most social of all the wild cats. 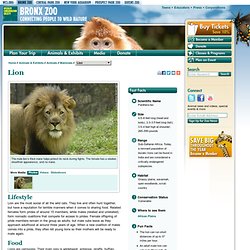 They live and often hunt together, but have a reputation for terrible manners when it comes to sharing food. Related females form prides of around 15 members, while males (related and unrelated) form nomadic coalitions that compete for access to prides. Female offspring of pride members remain in the group as adults, but male cubs leave as they approach adulthood at around three years of age. When a new coalition of males comes into a pride, they often kill young lions so their mothers will be ready to mate again. Food Lions are carnivores. Life Cycle Cubs can be born throughout the year, but pride members tend to give birth around the same time. Some of My Neighbors Hyenas, Grevy’s Zebras, Leopards, African wild dogs, African elephants, Impala, Black Rhinoceros, Cheetahs. 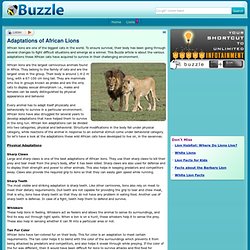 They belong to the family of cats and are the largest ones in the group. Their body is around 1.4-2 m long, with a 67-100 cm long tail. They are mammals who live in groups known as prides and are the only cats to display sexual dimorphism i.e., males and females can be easily distinguished by physical appearance and behavior. Every animal has to adapt itself physically and behaviorally to survive in a particular environment. African lions have also struggled for several years to develop adaptations that have helped them to survive in the long run. Physical Adaptations Sharp Claws Large and sharp claws is one of the best adaptations of African lions. Sharp Teeth The most visible and striking adaptation is sharp teeth. Whiskers These help lions in feeling. Tan Fur Color African lions have tan-colored fur on their body. Behavioral Adaptations Family Life A pride has several mothers giving birth to young ones.

Basic Facts About Lions. Renowned for its majesty and nicknamed "the king of the jungle," the lion possesses both beauty and strength. 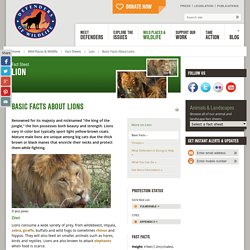 Lions vary in color but typically sport light yellow-brown coats. Mature male lions are unique among big cats due the thick brown or black manes that encircle their necks and protect them while fighting. © Jess Jones Diet Lions consume a wide variety of prey, from wildebeest, impala, zebra, giraffe, buffalo and wild hogs to sometimes rhinos and hippos. Population The lion population in Africa has been reduced by half since the early 1950s. Range Though lions used to live in most parts of Africa, they are now found only in the south Sahara desert and in parts of southern and eastern Africa. Behavior Did You Know? Both male and female lions roar, and that roar can be heard over five miles away! The only social member of the cat (Felidae) family, lions live in large groups called "prides," consisting of about 15 lions. Females do almost all of the hunting. Reproduction. Lions: Facts & Information About Lions. Kingdom: Animalia Phylum: Chordata Class: Mammalia Order: Carnivora. 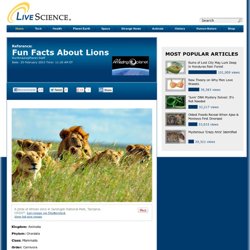 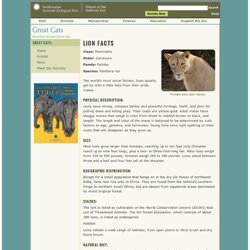 Physical Description: Lions have strong, compact bodies and powerful forelegs, teeth, and jaws for pulling down and killing prey. Size: Male lions grow larger than females, reaching up to ten feet long (females reach up to nine feet long), plus a two- to three-foot-long tail. Geographic Distribution: Except for a small population that hangs on in the dry Gir Forest of northwest India, lions now live only in Africa. Status: The lion is listed as vulnerable on the World Conservation Union's (IUCN's) Red List of Threatened Animals. Habitat: Lions inhabit a wide range of habitats, from open plains to thick brush and dry thorn forest.