“Hong Kong Elementary School Admissions Test Question #21″ This was the second most popular microblog post of the day on popular social network Sina Weibo at time of translation… From Sina Weibo: @微博搞笑排行榜: What takes an elementary school student just seconds to do; takes a high school student several minutes; takes a college student half and hour and up; and takes a Ph.D a lifetime… After I shared this problem with my class and saw so many academic tyrants spend half the day trying to figure it out, I snickered sinisterly inside. 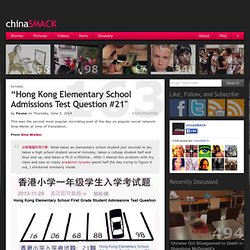 Comments from Sina Weibo: 你别闹了亲： It’s very simple, just took me an entire afternoon. Can You Solve This? We have met the 1%, and he is us. Guest Post by Willis Eschenbach In explanation of my title, I fear I’ll have to go on a bit of a digression. 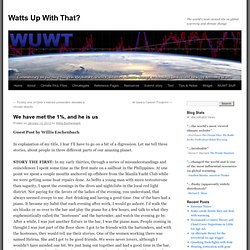 Let me tell three stories, about people in three different parts of our amazing planet. STORY THE FIRST: In my early thirties, through a series of misunderstandings and coincidences I spent some time as the first mate on a sailboat in the Philippines. At one point we spent a couple months anchored up offshore from the Manila Yacht Club while we were getting some boat repairs done. As befits a young man with more testosterone than sagacity, I spent the evenings in the dives and nightclubs in the local red light district. Figure 1. During this time, Helena kept telling me that I was rich. One other thing she wouldn’t do. Helena’s place turned out to be located in a shantytown covering an entire city block. 9 Out Of 10 Americans Are Completely Wrong About This Mind-Blowing Fact. What the Bleep Do We Know!? & What the Bleep!? - Down the Rabbit Hole. 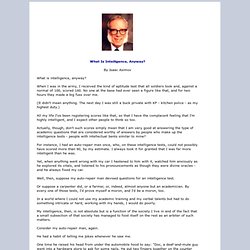 By Isaac Asimov What is intelligence, anyway? When I was in the army, I received the kind of aptitude test that all soldiers took and, against a normal of 100, scored 160. No one at the base had ever seen a figure like that, and for two hours they made a big fuss over me. (It didn't mean anything. All my life I've been registering scores like that, so that I have the complacent feeling that I'm highly intelligent, and I expect other people to think so too. Actually, though, don't such scores simply mean that I am very good at answering the type of academic questions that are considered worthy of answers by people who make up the intelligence tests - people with intellectual bents similar to mine?

For instance, I had an auto-repair man once, who, on these intelligence tests, could not possibly have scored more than 80, by my estimate. Well, then, suppose my auto-repair man devised questions for an intelligence test. Consider my auto-repair man, again. Why the mantis shrimp is my new favorite animal. Conscious Entities. The Most Honest Three Minutes In Television History. "The Rise of the Creative Class" by Richard Florida. Purchase Richard Florida's related book As I walked across the campus of Pittsburgh's Carnegie Mellon University one delightful spring day, I came upon a table filled with young people chatting and enjoying the spectacular weather. 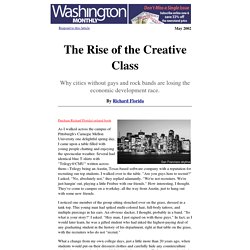 Several had identical blue T-shirts with "Trilogy@CMU" written across them---Trilogy being an Austin, Texas-based software company with a reputation for recruiting our top students. I walked over to the table. Dead Bodies On Mount Everest. Bob Thurman sagt, wir können Buddhas sein. Ecology of the Mind. For thousands of generations we humans grew up in nature. 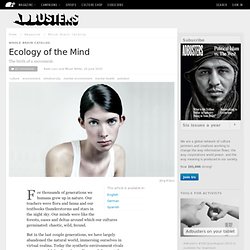 Our teachers were flora and fauna and our textbooks thunderstorms and stars in the night sky. Our minds were like the forests, oases and deltas around which our cultures germinated: chaotic, wild, fecund. But in the last couple generations, we have largely abandoned the natural world, immersing ourselves in virtual realms. Today the synthetic environment rivals nature as a driving force in our lives, and the mental environment has become the terrain where our fate as humans will be decided. By emigrating from nature we’ve done something more than just move domiciles – we have fundamentally altered the context in which we live our lives. Along with this transition to a new psychic realm, we have also seen the exponential rise of mental illnesses. John Kounios: The neuroscience behind epiphanies. Waking Up Body, Mind, Culture.

Check out Michael Stone's refreshing Marxist-Anarcho-Buddhist perspective on social change and activism below. 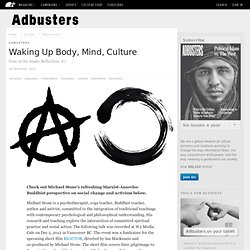 Michael Stone is a psychotherapist, yoga teacher, Buddhist teacher, author and activist, committed to the integration of traditional teachings with contemporary psychological and philosophical understanding. His research and teaching explore the intersection of committed spiritual practice and social action. The following talk was recorded at W2 Media Cafe on Dec 2, 2012 in Vancouver BC. The event was a fundraiser for the upcoming short film REACTOR, directed by Ian MacKenzie and co-produced by Michael Stone. The short film covers their pilgrimage to Japan in the wake of the tsunami and Fukushima meltdown, as they explore the ways Japanese people are responding to the disaster.