Legal Cannabis Would Cause Alcohol,Tobacco and Prison Profits to Plummet! I read this in a comment section and found it to be "Words of Wisdom" so I added it to my blog, and put up a few appropriate pictures.Give people the legal option and the alcohol use will drop. 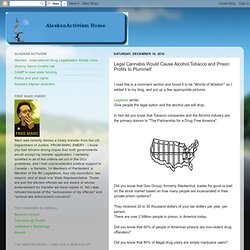 In fact did you know that Tobacco companies and the Alcohol industry are the primary donors to "The Partnership for a Drug Free America". Did you know that Geo Group, formerly Wackenhut, trades for good or bad on the stock market based on how many people are incarcerated in their private prison systems? They received 20 to 30 thousand dollars of your tax dollars per year, per person. There are over 2 Million people in prison, in America today. Did you know that 60% of people in American prisons are non-violent drug offenders? Did you know that 80% of illegal drug users are simply marijuana users? That legalizing cannabis would reduce the profit of corporations like Geo Group by 80% overnight? Prohibition isn't about anyone's health or 'protecting children and teens". Its about making money. Free Cannabis. 45 Uses For Lemons That Will Blow Your Socks Off.

Most people are familiar with the traditional uses for lemons to soothe sore throats and add some citrus flavor to our foods. 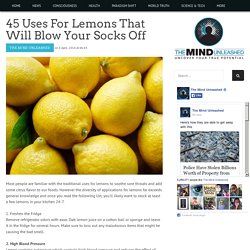 Ouabain: Nature's Forgotten Gift for Heart Health. 21st March 2016 By Benedikt Just Guest Writer for Wake Up World Could it be, that the best treatment for heart failure and heart attacks was already discovered 100 years ago, but nowadays even alternative medicine has forgotten about it? 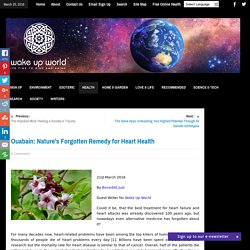 For many decades now, heart-related problems have been among the top killers of human life. Worldwide, thousands of people die of heart problems every day [1]. Could it be that a comeback of the forgotten natural remedy, Ouabain, could provide the answer? Nowadays, anyone who is even just mildly interested in heart health knows about the importance and beneficial effects that lifestyle changes have on any disease, including heart disease. Ouabain, the Forgotten Heart Remedy A long time ago, there was already a gentle, effective plant-based remedy for the troubled human heart. Was that accidental discovery, over 100 years ago, already the best remedy for heart patients? As Dr. What makes this plant remedy so special? Dr. Honestly, I am a big dreamer. Flowers Used in Chinese Herbal Medicine. 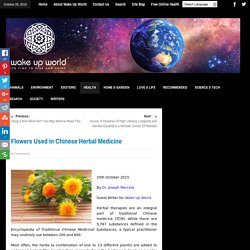 Joseph Mercola Guest Writer for Wake Up World Herbal therapies are an integral part of traditional Chinese medicine (TCM). While there are 5,767 substances defined in the Encyclopedia of Traditional Chinese Medicinal Substances, a typical practitioner may routinely use between 200 and 600. Most often, the herbs (a combination of one to 13 different plants) are added to water and boiled. The herbs may also be consumed in powdered form, spray-dried concentrates, pill form, or even “honey pills,” which are “prepared by combining powdered herbs with concentrated decoctions and honey to produce a small herbal pill.”1 It used to be customary for Chinese families to maintain a collection of herbal formulas used to treat various medical problems, life changes (pregnancy, menopause, and old age), or even use for the different seasons. 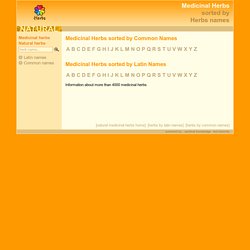