The Handbook of Sustainability Literacy. Psychology Today UK. There is a concept in the psychological literature known as locus of control that is unfamiliar to most people, even though, once defined, is commonly understood. 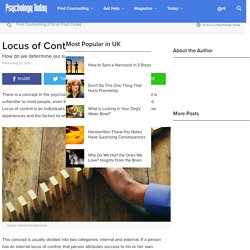 Locus of control is an individual’s belief system regarding the causes of his or her experiences and the factors to which that person attributes success or failure. Source: tomertu/Shutterstock article continues after advertisement This concept is usually divided into two categories: internal and external. If a person has an internal locus of control, that person attributes success to his or her own efforts and abilities. For several years, I taught a course for mental health professionals who were interested in developing a private practice in psychotherapy.

Open Education Handbook/History of open education - Wikibooks, open books for an open world. Open Education covers a broad range of activities and has a long history. 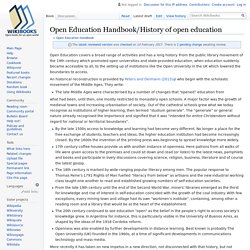 From the public library movement of the 19th century which promoted open universities and state-provided education, when education suddenly became accessible to all, to the setting up of institutions like the Open University in the UK which lowered the boundaries to access. An historical reconstruction is provided by Peters and Deimann (2013) who begin with the scholastic movement of the Middle Ages. Get a logical fallacy poster. Free Online Courses. Radical Education Forum's Blog. Rad Ed at the anarchist bookfair tomorrow, 29th October! 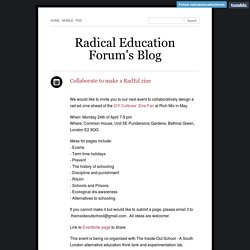 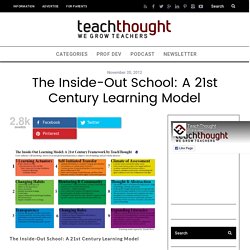 The goal of the model is simple enough–not pure academic proficiency, but instead authentic self-knowledge, diverse local and global interdependence, adaptive critical thinking, and adaptive media literacy. By design this model emphasizes the role of play, diverse digital and physical media, and a designed interdependence between communities and schools. The attempted personalization of learning occurs through new actuators and new notions of local and global citizenship. Here, families, business leaders, humanities-based organizations, neighbors, mentors, higher-education institutions, all converging to witness, revere, respond to, and support the learning of its own community members. 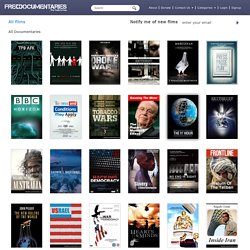 Democratic education in cooperative development - Cultivate.Coop. Popular education as well as democratic education (sometimes referred to as participatory education) are forms of education where the teachers, educators, and facilitators are valued on an equal level with the students, learners, and participants. 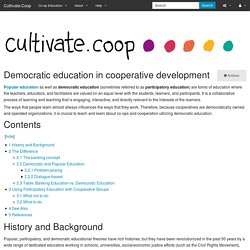 It is a collaborative process of learning and teaching that is engaging, interactive, and directly relevant to the interests of the learners. The ways that people learn almost always influences the ways that they work. Therefore, because cooperatives are democratically owned and operated organizations, it is crucial to teach and learn about co-ops and cooperation utilizing democratic education.   The Knowledge Processes   Anticipation Guide Make up a list of five or six true /false statements on the text to be read. 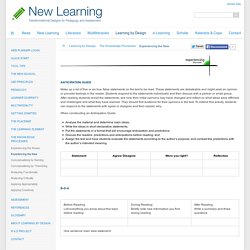 These statements are debateable and might seek an opinion or provoke feelings in the reader. Students respond to the statements individually and then discuss with a partner or small group. After reading students revisit the statements, see how their initial opinions may have changed and reflect on what ideas were affirmed and challenged and what they have learned. They should find evidence for their opinions in the text.   Learning by Design   The Learning by Design pedagogy uses eight ‘Knowledge Processes’. 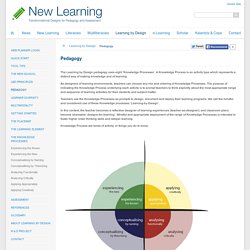 A Knowledge Process is an activity type which represents a distinct way of making knowledge and of learning. As designers of learning environments, teachers can choose any mix and ordering of Knowledge Processes. New Learning. Pedagogy of the Oppressed. Pedagogy of the Oppressed (Portuguese: Pedagogia do Oprimido), written by educator Paulo Freire, proposes a pedagogy with a new relationship between teacher, student, and society. 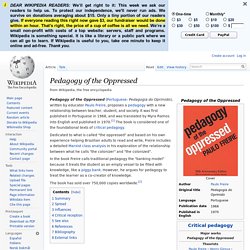 It was first published in Portuguese in 1968, and was translated by Myra Ramos into English and published in 1970.[1] The book is considered one of the foundational texts of critical pedagogy. Dedicated to what is called "the oppressed" and based on his own experience helping Brazilian adults to read and write, Freire includes a detailed Marxist class analysis in his exploration of the relationship between what he calls "the colonizer" and "the colonized".

In the book Freire calls traditional pedagogy the "banking model" because it treats the student as an empty vessel to be filled with knowledge, like a piggy bank. However, he argues for pedagogy to treat the learner as a co-creator of knowledge. The book has sold over 750,000 copies worldwide.[2] Summary[edit] Spread[edit] Influences[edit] Critical reception[edit] Anyone can learn to be a polymath – Robert Twigger. I travelled with Bedouin in the Western Desert of Egypt. 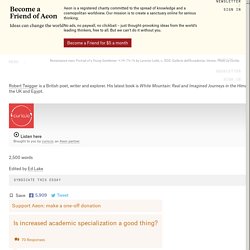 When we got a puncture, they used tape and an old inner tube to suck air from three tyres to inflate a fourth. Francesc Ferrer i Guàrdia. Francesc Ferrer i Guàrdia (10 January 1859 – 13 October 1909)[1] (known as Francisco Ferrer y Guardia in Spanish and often simply as Francisco Ferrer) was a Spanish anarchist. Life[edit] He was born in Alella (a small town near Barcelona) to Roman Catholic parents. He was sent to work on a Barcelona firm at the age of 15. The owner of the firm was an anti-cleric and is said to have had a great influence on Ferrer. A follower of Spanish republican leader Manuel Ruiz Zorrilla, Ferrer was exiled to Paris with his wife and children in 1885. In 1901 he returned to Spain and opened the Escuela Moderna (The Modern School) to teach middle-class children (then) radical social values.

TRAPESE - Popular Education Collective. Reflect%20book%20-%20chapter%20Cutler.pdf. How to Learn Without Memorizing. Photo by Edwin Stemp Rote memorization is an inefficient way to learn. Just retaining a single formula can mean pounding the same information into your skull dozens of times. If your computer hard drive had this accuracy, you’d probably throw it out. Unfortunately, you’re stuck with your brain.