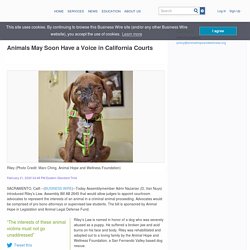 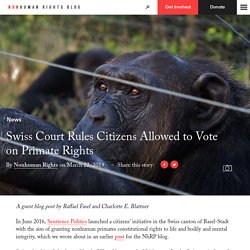 Blattner In June 2016, Sentience Politics launched a citizens’ initiative in the Swiss canton of Basel-Stadt with the aim of granting nonhuman primates constitutional rights to life and bodily and mental integrity, which we wrote about in an earlier post for the NhRP blog. Switzerland is a federal state like the US and has a total of 26 “cantons”—the Swiss equivalent of a US state.

As is common in some US states, the Swiss cantons provide their citizens with direct democratic tools to participate in the legislative process, giving them, for example, the possibility to propose amendments to the cantonal constitution by way of a citizens’ initiative. In our last post, we wrote about how, after supporters of the primate initiative were able to collect the necessary signatures, the Cantonal Parliament, based on a report by the Cantonal Executive, declared the initiative invalid in January of 2018 mainly on two grounds.

What the Court said. Laws that Protect Animals - Animal Legal Defense Fund. In the United States, animal protection laws can be enacted and enforced at every level of government. 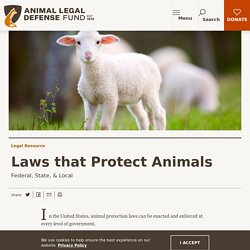 Most animal protection legislation happens at the state level. There are also a handful of federal animal protection laws. Additionally, some cities and counties pass ordinances to protect animals. This is why it’s critically important to advocate for better animal protection laws with lawmakers in all government bodies. Each has the power to help. Federal Animal Protection Laws. Animal Legal & Historical Center. Managing Wildlife Through 'Evolutionary Traps' - Faunalytics. Evolutionary traps, which modify species’ behaviors due to fast-paced environmental changes, can be intentionally created for the management of invasive or overpopulated species. 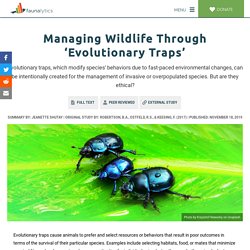 But are they ethical? Summary By: Jeanette Shutay | Original Study By: Robertson, B.A., Ostfeld, R.S., & Keesing, F. (2017) | Published: November 18, 2019 Evolutionary traps cause animals to prefer and select resources or behaviors that result in poor outcomes in terms of the survival of their particular species. Examples include selecting habitats, food, or mates that minimize species’ fitness level or create a dangerous situation for individual animals. In other words, the animal adopts a set of maladaptive behaviors that result in the decline of the species’ population.

The emergence of evolutionary traps is typically a result of a rapidly changing environment. There are three general mechanisms by which intentional traps can be used to manage wildlife. Scientists discover skin keeps time independent of the brain. Table of Contents 1 Journal of Animal Law and Ethics 2006. Index to Journal of Animal and Natural Resource Law. Volume #1 (2005) Volume #2 (2006) Volume #3 (2007) Volume #4 (2008) Volume #5 (2009) Volume #6 (2010) 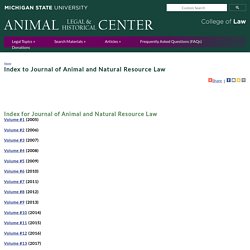 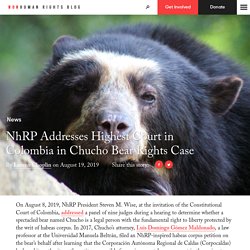 Wise, at the invitation of the Constitutional Court of Colombia, addressed a panel of nine judges during a hearing to determine whether a spectacled bear named Chucho is a legal person with the fundamental right to liberty protected by the writ of habeas corpus. In 2017, Chucho’s attorney, Luis Domingo Gómez Maldonado, a law professor at the Universidad Manuela Beltrán, filed an NhRP-inspired habeas corpus petition on the bear’s behalf after learning that the Corporación Autónoma Regional de Caldas (Corpocaldas) had used its authority as the entity responsible for environmental management in the region to transfer him from the Río Blanco Nature Reserve to the Barranquilla City Zoo.

In so doing, Luis argues, Corpocaldas had deprived Chucho of his right to liberty, severely compromising his physical and emotional well-being. Luis then appealed Chucho’s case to the Colombian Constitutional Court, which ordering a hearing. Watch the video here: Building An International Nonhuman Rights Movement. Today, all over the planet, nonhuman animals are treated as mere “things” under the law—incapable of possessing even a single right—despite growing scientific evidence of their rich emotional and social lives. 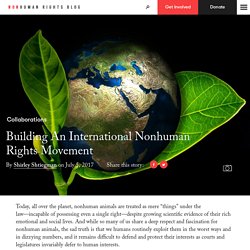 And while so many of us share a deep respect and fascination for nonhuman animals, the sad truth is that we humans routinely exploit them in the worst ways and in dizzying numbers, and it remains difficult to defend and protect their interests as courts and legislatures invariably defer to human interests. The good news: people in countries all over the world are working to end the “thinghood” of nonhuman animals and finally deliver to them a taste of real justice. Indeed, internationally, the question of whether nonhuman animals should enjoy legal rights is taking on greater urgency than ever before. In the United States, the movement to secure nonhuman rights is led by the Nonhuman Rights Project under the direction of attorney Steven M. Wise. How to Subscribe to the MFA Research Blog. Hello there, fellow research- and analytics-minded folks! 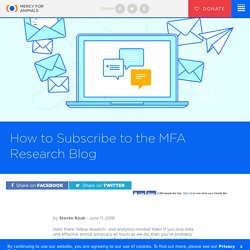 If you love data and effective animal advocacy as much as we do, then you’ve probably wondered how you can be notified whenever we have a new post on our research blog here at Mercy For Animals. If you want to subscribe to our blog through an RSS feed reader (such as Feedly), use the instructions directly below. If you want to get our blog posts delivered to your email, jump down to the next section. Subscribing to the MFA Research Blog Using an RSS Feed Reader First of all, if you have no idea what an RSS feed reader is, that’s OK! Subscribing to the MFA Research Blog Using Email If you want to subscribe to the MFA research blog using email, here are some services you can use with the same URL above. Vegan Cheat Sheet - The largest directory of updated vegan links and resources! Creating Communities Equipped to Fight Animal Cruelty. Fundamental flaws in the enforcement of Mississippi animal protection statutes have been a stumbling block for many Mississippi law enforcement agencies, prosecutors, and judges. 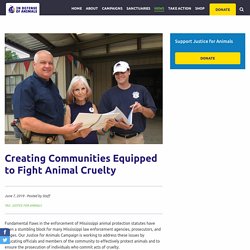 Our Justice for Animals Campaign is working to address these issues by educating officials and members of the community to effectively protect animals and to ensure the prosecution of individuals who commit acts of cruelty. We will soon be printing and distributing brand-new Justice for Animals handbooks to the 314 justice court judges, county prosecutors, and sheriffs throughout all of Mississippi’s 82 counties. The well-researched content was originally created by the now defunct nonprofit, Mississippi Animal Control and Protection Organization. The guides contain animal law, procedures, enforcement documents, and definitions. The Henneke Body Condition Scoring System for assessing the physical condition of horses is included, as well as information on common domestic species. 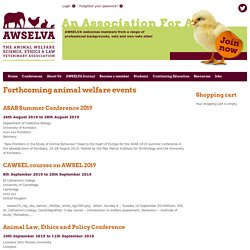 Do chimpanzees now possess legal personhood? The court hearing for the two chimpanzees (Leo and Hercules) is scheduled on May 27, 2015. What is a legal right? The Radical Left’s Top 10 Objections to Veganism (And Why They Suck) By Dan Kidby Just because someone is an amazing anti-racist or feminist activist doesn’t mean they will open their mind and hearts to animals. When we try to advocate for animal liberation we get all the usual objections that you get from your typical liberal, but a debate with a radical brings with it some very specific objections. So here are responses to 10 common objections to veganism by the radical left. 1) Veganism is a consumer activity. International Animal-Law. Dr Corey Wrenn - Social Policy, Sociology and Social Research. Vegan Feminism for Humans and Other Animals - Vegan Feminist NetworkVegan Feminist Network.

Christopher Sebastian. “Many animals cope with unstimulating or small environments through stereotypic behavior, which, in zoological parlance, is a repetitive behavior that serves no obvious purpose, such as pacing, bar biting, and figure-eight swimming. Trichotillomania (repetitive hair plucking) and regurgitation and reingestation (the practice of repetitively vomiting and eating the vomit) are also common in captivity. According to Temple Grandin and Catherine Johnson, authors of Animals Make Us Human, these behaviors, “almost never occur in the wild.” In captivity, these behaviors are so common that they have a name: “zoochosis,” or psychosis caused by confinement […]