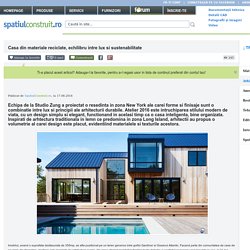 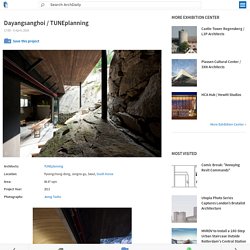 Proyect description Pyeongchang-dong at the northern end of Jongro-gu, Pyeongchang was warehouse of Seonhyecheong, a government office which had managed receipt and disbursement of rice, cloth and coin used as means of tax payment in Joseon Dynasty, under the name of Daidongmi, Daidongpo and Daidongjeon each. As its name derived from Pyeongchang tells, this area had to build a ground up high with embarkment because of its high and slope topography as a village of power and wealth. At the end of the road, we can meet an interesting alley leading to a house of Pyeongchang-dong along the winding ridge of mountain Bukhansan edge which shows the views one by one.

Rocky mountain in the middle of Jongno-gu, heart of Seoul. I wanted to attach the much greater importance to the energy of rocky mountain than the region of Pyeongchang-dong. House in Kranjska Gora / Prima d.o.o. Architects Location Architects in Charge Jernej Prijon, Vid Razinger Area 180.0 sqm Project Year 2015 Photographs From the architect. 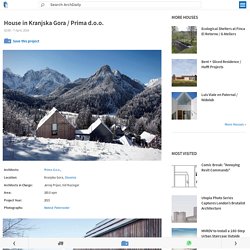 The approach to the project was defined by steep terrain and by the magnificent views that the site offered. The design follows those two main characteristics first positioning and second by opening of the living quarters towards the south (views towards the mountains) with large glass walls (windows) and with exits on both sides of the house. These smaller more secluded exterior spaces can be used accordingly depending on the hour of the day, the season, wind…etc.

The adaptation to the terrain was achieved with a simple composition of two similar volumes and the space in between that together form the whole and still maintain the small scale of surrounding objects. This Contemporary Extension Was Built Behind A Heritage Home In Australia. Photography by Dion Robeson When Keen Architecture were approached by their clients to design a small studio, basement, and workshop, the project evolved into a full extension for their heritage home, located in Fremantle, Australia. 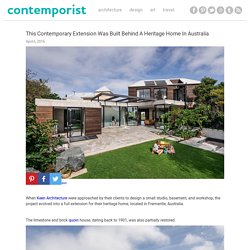 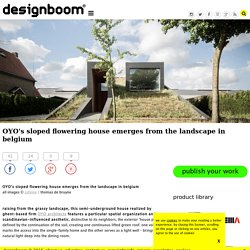 10 space-saving furniture designs for small homes. City dwellers are adapting to escalating house prices by living in smaller, more flexible spaces, and designers are responding with furniture that makes the most of every inch of the floors, walls, and even the ceiling. 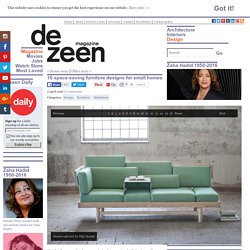 We've pulled together 10 of the best examples (+ slideshow). BedUp by Décadrages This bed can be hoisted up the ceiling when not in use. It was designed by French furniture manufacture Décadrages as an alternative to the Murphy folding bed. Find out more about BedUp » This low maintenance house was designed to ‘lock and leave’ Photography by Dion Robeson Kris Keen of Keen Architecture, has sent us their latest project, located in Perth, Australia, that they’ve designed for a couple with a busy lifestyle, who wanted a low-maintenance home they could just ‘lock and leave.’ 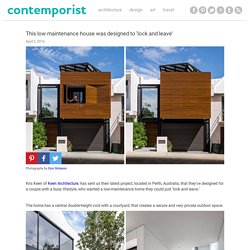 The home has a central double-height void with a courtyard, that creates a secure and very private outdoor space. All of the living spaces surrounding the courtyard, open up to it through bi-fold doors, like you can see here in the kitchen. Wood has been used throughout the home to add a natural element. On the other side of the courtyard, is the main living and dining area. Ansty Plum House + Studio / Coppin Dockray. Architects Location Ansty, Salisbury, Wiltshire SP3, UK Project Year 2015 Photographs Interiors Coppin Dockray Structural Engineer Tall Engineers Lighting Design Lightplan Contractor JC Symonds Joinery Westside Design Photography Brotherton Lock & Rachael Smith Paving Marshalls Cork floors Siesta Cork Company Sanitaryware Bathroom Brands Construction Cost £240,000 From the architect. 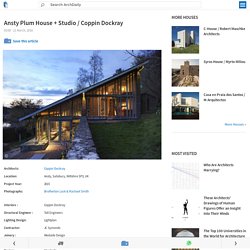 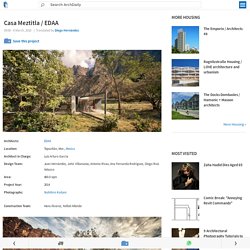 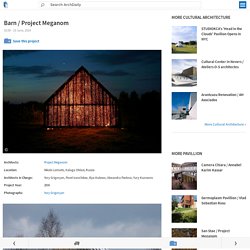 The Barn is a pavilion created for the land art festival "Archstoyanie" in Nicolo-Lenivets in 2006. It was built not from drawings, but from SMS. Its entire description is provided in the following message: “Meter fifty three lateral facade apex four zero one base four ninety five length five sixty five plank twenty mm vertically drill under different angles for each square meter six hundred openings of ten mm seven hundred openings of seven mm a door one hundred sixty with a spring also drill to open strictly towards the north to orient a detached tree in the evening lit inside a lamp of five hundred watt”.

Background Our clients have a strong affinity with Scandinavia – Mrs Penman is Swedish. Their children are being brought up bilingually. This wedge-shaped house has a sloping green roof facing the street. Photography by Cafeine OYO architects have designed a home in Belgium, that is built so that part of the home is below ground level. The home’s shape is very unique, with its green roof that angles upwards from the road. This writer’s shed was designed to be a quiet haven in the big city.

Photography by Wai Ming Ng WSD Architecture were commissioned by their client, an author and illustrator, to design and build a backyard shed where they could work, at the end of their property in the London Borough of Hackney. When describing the shed, WSD Architecture mention, “the space is conceived as a haven in the city; a fairy-tale hut at the bottom of the garden where the client can retreat and immerse himself in his work.” You enter the shed through a small covered deck area, and inside the door, there’s a small bathroom tucked away in the corner.

A skylight above the desk provides plenty of natural light. The entire back wall has been fitted out with a custom-designed bookshelf. A wood burning fireplace keeps the shed warm. A tiny cut-out window is perfectly framed like it is part of the bookshelf. Cargo architecture completes villa boreale in eastern quebec. Mar 24, 2016 cargo architecture clads villa boreale in quebec with black metal and white cedar cargo architecture clads villa boreale in quebec with black metal and white cedarall images by 1Px photography in charlevoix, an eastern region of the quebec province, local practice cargo architecture has completed a spacious dwelling capable of accommodating up to 14 guests. set within a forest clearing, ‘villa boréale’ is set on a private site, aligning itself with its natural surroundings. working closely with the entrepreneurial clients — a young couple in their 30s — the design team developed a scheme inspired by scandinavian cottages and barns. this influence resonates in the material choices, with pale tones used in tandem with more natural textures such as wood and concrete. black metal cladding creates a visual contrast that highlights the smooth matte finish of the steel, and the natural grain of the eastern white cedar. the spacious property is capable of accommodating up to 14 guests.