Experiments in physics and sciencies.

Earlier today, well-known American theoretical physicist Laurence Kraus tweeted that the results of a recent experiment looking for gravitational waves have finally been peer-reviewed and we just might have the first direct evidence that these light-speed ripples in the Universe actually exist. 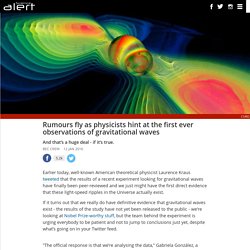 If it turns out that we really do have definitive evidence that gravitational waves exist - the results of the study have not yet been released to the public - we’re looking at Nobel Prize-worthy stuff, but the team behind the experiment is urging everybody to be patient and not to jump to conclusions just yet, despite what’s going on in your Twitter feed. "The official response is that we’re analysing the data," Gabriela González, a physicist from Louisiana State University and spokesperson for the LIGO (Laser Interferometer Gravitational Wave Observatory) group that ran the experiments, told Nature when rumours started flying back in September.

But maybe LIGO is. Watch this space. TOKYO -- A new method of securing communications is set to make life harder for would-be data thieves. 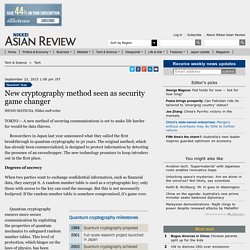 Researchers in Japan last year announced what they called the first breakthrough in quantum cryptography in 30 years. The original method, which has already been commercialized, is designed to protect information by detecting the presence of an eavesdropper. The new technology promises to keep intruders out in the first place. Degrees of secrecy When two parties want to exchange confidential information, such as financial data, they encrypt it. Quantum cryptography ensures more secure communication by exploiting the properties of quantum mechanics to safeguard random number tables. 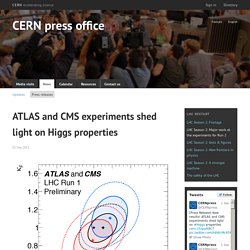 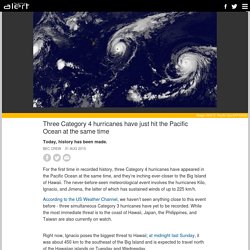 The never-before-seen meteorological event involves the hurricanes Kilo, Ignacio, and Jimena, the latter of which has sustained winds of up to 225 km/h. According to the US Weather Channel, we haven’t seen anything close to this event before - three simultaneous Category 3 hurricanes have yet to be recorded. While the most immediate threat is to the coast of Hawaii, Japan, the Philippines, and Taiwan are also currently on watch. World’s most powerful telescope digital camera gets green light for construction. Rendering of the Large Synoptic Survey Telescope observatory atop Cerro Pachón in Chile that will use the 3.2-gigapixel digital camera — the world’s largest. 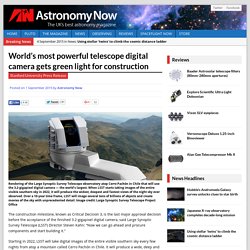 When LSST starts taking images of the entire visible southern sky in 2022, it will produce the widest, deepest and fastest views of the night sky ever observed. Over a 10-year time frame, LSST will image several tens of billions of objects and create movies of the sky with unprecedented detail. Image credit: Large Synoptic Survey Telescope Project Office The construction milestone, known as Critical Decision 3, is the last major approval decision before the acceptance of the finished 3.2-gigapixel digital camera, said Large Synoptic Survey Telescope (LSST) Director Steven Kahn: “Now we can go ahead and procure components and start building it.” Starting in 2022, LSST will take digital images of the entire visible southern sky every few nights from atop a mountain called Cerro Pachón in Chile. Combined results find Higgs still standard. Messier 96: a galactic maelstrom. Image credit: ESA/Hubble & NASA and the LEGUS Team; Acknowledgement: R. 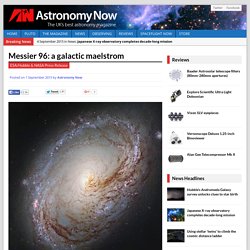 Gendler. This new NASA/ESA Hubble Space Telescope image shows Messier 96 (M96 or NGC 3368), a spiral galaxy just over 35 million light-years away in the constellation of Leo (The Lion). It is of about the same mass and size as the Milky Way. It was first discovered by astronomer Pierre Méchain in 1781, and added to Charles Messier’s famous catalogue of astronomical objects just four days later. The galaxy resembles a giant maelstrom of glowing gas, rippled with dark dust that swirls inwards towards the nucleus. This group, named the M96 Group, also includes the bright galaxies Messier 105 and Messier 95, as well as a number of smaller and fainter galaxies. Scientists 'squeeze' light one particle at a time. A team of scientists has successfully measured particles of light being "squeezed", in an experiment that had been written off in physics textbooks as impossible to observe. 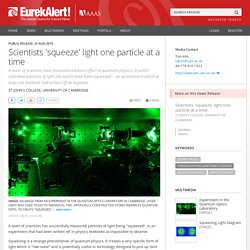 Squeezing is a strange phenomenon of quantum physics. It creates a very specific form of light which is "low-noise" and is potentially useful in technology designed to pick up faint signals, such as the detection of gravitational waves. The standard approach to squeezing light involves firing an intense laser beam at a material, usually a non-linear crystal, which produces the desired effect. For more than 30 years, however, a theory has existed about another possible technique. This involves exciting a single atom with just a tiny amount of light. So it has proven - until now. "We managed to do it because we now have artificial atoms with optical properties that are superior to natural atoms.