SOP Solver cause to Recalculates SDF every frame. 'SpencerL', on 21 Mar 2011 - 4:11 PM, said: It is the RBD Object which is responsible for the SDF calculation. 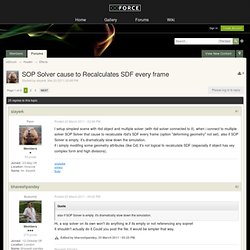 If you crack open the RBD Object > rbdconfigureobject, there is a SDF Representation DOP which is the culprit.If you just need to run a sop solver which doesn't need an SDF, you could create your object from scratch with an Empty Object DOP followed by a SOP Geometry DOP to reference the geometry you want to modify. ok. i describe my task. i'm have rbd object -> voronoy configure object. in other words geometry of source rbd object changing over time. my task is to calculate per-point velocity. my idea is: Multiple solver with 3 solvers.1st solver - SOP Solver: saves P in oldP attribute2st slver - Rigid body Solver: calculates new Position of points3rd solver - SOP Solver: calculates per-point velocity = (P-OldP)/TimeInc.

How to organize this setup without slow down the calculations. Accumulating attribute through sop solver dop. SOP Solver with Deforming Geometry. Sounds like you were on the right track. 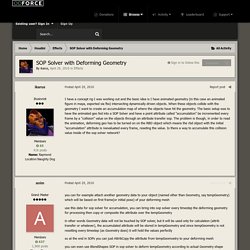 What I have done in the past is to take a Static Object DOP (with deforming geometry turned on) and feed that into a SOP Geometry DOP. In the SOP Geometry DOP, have the Sop Geometry area point to the same geometry that the Static Object DOP. Put $T in the time field and under the data name field, put whatever name you want to (you will use that in a sec). Now put down a SOP solver DOP.

In the data name, put the same name that you did in the SOP geometry DOP and in the SOP path field, just put a period. Now lay down a point sop. Taking transfered attribute forever. I, Houdini: Growing Objects. H12 Solver node. My sop-solver-tool. easier than the for each sop! Hey Peeps! 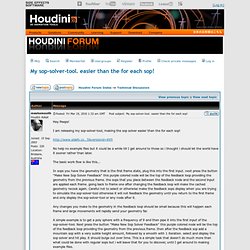 I am releasing my sop-solver-tool, making the sop solver easier than the for each sop! No help no example files but it could be a while till I get around to those so i thought i should let the world have it sooner rather than later. The basic work flow is like this... In sops you have the geometry that is the first frame state, plug this into the first input. next press the button "Make New Sop Solver Feedback" this purple colored node will be the top of the feedback loop providing the geometry from the previous frame. the sops that you place between the feedback node and the second input are applied each frame. going back to frame one after changing the feedback loop will make the cached geometry recook again.