5 Things Your Baby Should Avoid In The NICU. Babies in the neonatal intensive care unit hospital don't always need the tests and treatments suggested. 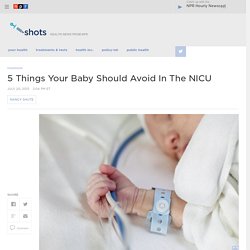 iStockphoto hide caption itoggle caption iStockphoto Babies in the neonatal intensive care unit hospital don't always need the tests and treatments suggested. iStockphoto If you've got a baby in the neonatal intensive care unit, your first thought is probably not, "Does my child really need that antireflux medication? " But antireflux meds in for newborns topped the list of five overused tests or treatments released Monday as part of the "Choosing Wisely" program.

"With newborns, there's very little evidence that routine use will improve the symptoms," says DeWayne Pursley, chief neonatologist at Beth Israel Deaconess Medical Center and senior author on the paper, which was published in Pediatrics. In other words, babies spit up. The other four tests and treatments to avoid doing routinely are: Glogin?mobile=1&URI= When Parents Are The Ones Too Distracted By Devices : All Tech Considered. Sally Anscombe/Flickr Select/Getty Images Having a teenager lost in his or her cellphone — texting friends and communicating with parents in monosyllabic grunts — has become a trope of the Internet age. 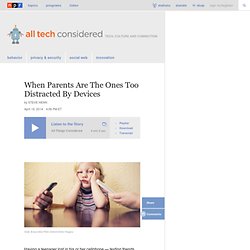 But teens are not the only ones distracted by their devices. Many parents have the same problem. As much as I hate to admit it, I'm one of them. A couple weeks ago, my 12-year-daughter, Ella, staged an intervention. A mommy after 35. A mommy after 35 Most healthy women from age 35 into their 40s have healthy pregnancies. 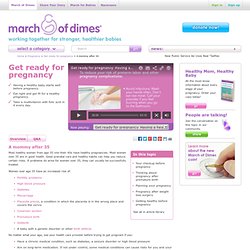 Most women over 35 are in good health. Good prenatal care and healthy habits can help you reduce certain risks. If problems do arise for women over 35, they can usually be successfully treated. Women over age 35 have an increased risk of: With Gene Disorders, The Mother's Age Matters, Not the Egg's. Hide captionAll of the eggs that a woman carries are produced while she's still in her mother's womb. 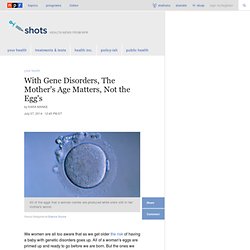 Pascal Goetgheluck/Science Source All of the eggs that a woman carries are produced while she's still in her mother's womb. We women are all too aware that as we get older the risk of having a baby with genetic disorders goes up. Mother, Father, And Son Photograph Themselves Once A Year… For 21 Years. This family took their picture once a year, every year, in front of the same backdrop. 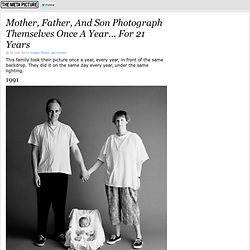 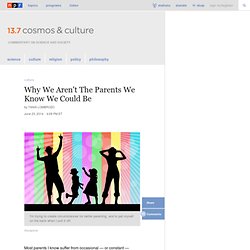 Most parents I know suffer from occasional — or constant — eruptions of parental self-judgment: moments when they feel they fall short of being the parents they could be. From Resumes To Romance, Giving Young Dads The Skills To Succeed. Hide captionMembers of the L.A. 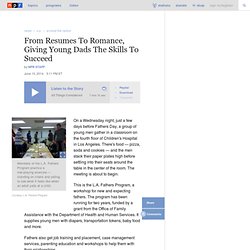 Fathers Program practice a role-playing exercise — standing on chairs and yelling to see what it feels like when an adult yells at a child. Courtesy L.A. Fathers Program Members of the L.A. Children Don't Come With An Owner's Manual : Code Switch. Hide captionSylvester Monroe and ex-wife Regina at his graduation. 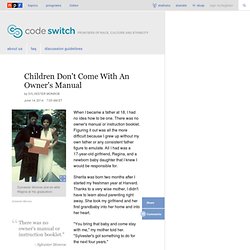 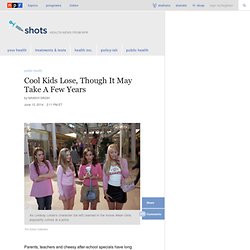 Addicted And Pregnant: 'The Most Heart-Wrenching Experience Of My Life' Maria Fabrizio for NPR I bought my first and only pregnancy test when I was 26. 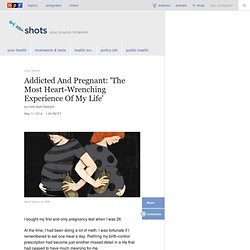 At the time, I had been doing a lot of meth. I was fortunate if I remembered to eat one meal a day. Refilling my birth-control prescription had become just another missed detail in a life that had ceased to have much meaning for me. I was an addict, and I was staring at two very bright pink lines on a stick. I showed the test to my boyfriend. He wanted to see the pregnancy through. I started drinking at age 14. My Baby’s Head Is Flat! Study: Expensive Helmet Likely Won’t Help. Miles, a patient at Boston Children’s Hospital, wearing his corrective helmet (Photo: Katherine C. Cohen/BCH) When my son was an infant, we followed modern medical wisdom and always put him to sleep facing upward. Within a few weeks, he developed a noticeably flat plane on one side of the back of his soft, bald little head. This Young Mother Is Giving Up On Her Kids And I Don't Blame Her. Meet Stephanie Metz, she is a mother of two young boys in western South Dakota.

Why My Kids Are NOT the Center of My World Wait, what did she say? Yeah, you read that right. To Get Help From A Little Kid, Ask The Right Way : Shots - Health News. Hide captionNeed a hand with those dishes? iStockphoto Motivating children to stop playing and help out with chores isn't exactly an easy sell, as most parents and teachers will attest. But how you ask can make all the difference, psychologists say. If you say something like, "Please help me," the kids are more likely to keep playing with their Legos. But ask them, "Please be a helper," and they'll be more responsive, researchers report Wednesday in the journal Child Development. Being called a helper makes kids feel like they're embodying a virtue, says Christopher Bryan, a psychologist at the University of California, San Diego and one of the researchers behind the study.

Watch A Girl Grow From Zero To 14 In Four Minutes. Trigger warning to parents: This video will delight and crush you all at once. Dutch photographer Frans Hofmeester has filmed his daughter Lotte every week from her birth through the age of 14, and just released the latest four-minute montage of her changes over time. It's the third in an annual series that Hofmeester started when Lotte turned 12 and updated each year since.

The latest version garnered more than one million views on YouTube in just four days. The new Lotte edit was shown last month at the Spanish National Reina Sofia museum in Madrid. Set against the same white baby blanket, each sped-up shot shows Lotte burbling, then talking, laughing, brooding, questioning, or doing whatever she felt like for those few minutes each week. A Third Of School-Age Kids May Have Risky Cholesterol Levels : Shots - Health... Hide captionGetting kids to exercise regularly and eat right can reduce their risk of heart disease down the road. Robert Brown/iStockphoto. Does Teaching Kids To Get 'Gritty' Help Them Get Ahead? Hide captionAt the Lenox Academy in Brooklyn, N.Y., educators try to teach kids to see struggle as a normal part of learning.

Tovia Smith/NPR At the Lenox Academy in Brooklyn, N.Y., educators try to teach kids to see struggle as a normal part of learning. Does Teaching Kids To Get 'Gritty' Help Them Get Ahead? Efforts To Close The Achievement Gap In Kids Start At Home. Hide captionStephanie Taveras (left) visits Julia Alfaro and her 3-year-old daughter, Ayleen, to read and discuss her vocabulary progress. Kids These Days: Growing Up Too Fast Or Never At All? On the cover of the April issue of The Atlantic there's a picture of a boy who could be 6 or 7. 'Redefining Girly' book takes on stereotypes, what girly means. The Only Six Words Parents Need to Say to Their Kids About Sports—Or Any Perf...

Parenting In The Age Of Apps: Is That iPad Help Or Harm? : Shots - Health News. Hide captionWith tablet technology still relatively new, pediatricians are trying to understand how interactive media affects children. Not finished reading. Love Your Kids. Leave Them Alone: The Art of Radical Parenting. ~ Kristin S. Luce. I was driving home with my two daughters, then four and six years old, when my cell phone rang. I Got It From My Momma: 4 Surprising Things To Thank Mom For. A love of garlic, onions and other strong flavors Babies learn to taste and smell while still in the womb, and as they gulp mouthfuls of amniotic fluid, they become accustomed to flavors of mom’s food. The Pains Of Parenting, And Other Life Lessons From Louis C.K.

Best Kept Secret For Postpartum Depression? Help At Home. Sibling Study Finds No Long-Term Breastfeeding Benefits For Kids. Babies Who Eat Too Well May Be On The Path To Obesity : Shots - Health News. To the Ticket Agent at the Delta Counter