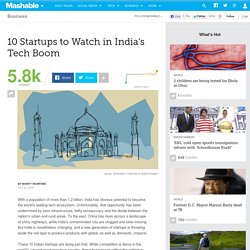 Unfortunately, that opportunity has been undermined by poor infrastructure, hefty bureaucracy and the divide between the nation's urban and rural areas. Believe It or Not, Wales Has a Growing Tech Scene. TechCrunch - The latest technology news and information on startups. Our Favorite 500 Startups Demo Day Businesses. At the ninth edition of 500 Startups’ demo day, 30 startups took to the stage vying for investment and a mention in the tech press. 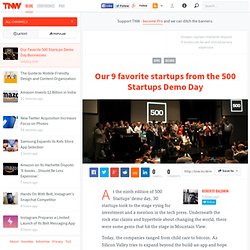 Underneath the rock star claims and hyperbole about changing the world, there were some gems that hit the stage in Mountain View. Today, the companies ranged from child care to bitcoin. As Silicon Valley tries to expand beyond the build-an-app and hope Facebook/Google/Apple/etc buy’s it business plan, start ups have become more eclectic. The First Trillion-Dollar Startup. Editor’s note: Rhett Morris is the director of Endeavor Insight, the research arm of Endeavor, a nonprofit that supports more than 900 entrepreneurs in 20 countries. 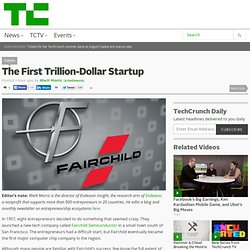 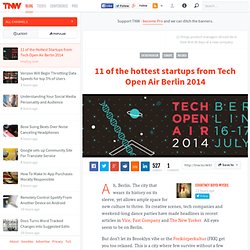 The city that wears its history on its sleeve, yet allows ample space for new culture to thrive. Australian Government Should Follow Singapore in Supporting Startups. The 4 most exciting HAXLR8R hardware startups. The HAXLR8R accelerator may sound like the X-Games/13 year-old leet-speak of accelerators with all the capital letters and the use of an “8″ in its name. 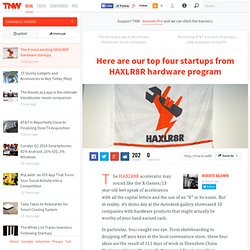 But in reality, it’s demo day at the Autodesk gallery showcased 10 companies with hardware products that might actually be worthy of your hard-earned cash. In particular, four caught our eye. From skateboarding to dropping off your keys at the local convenience store, these four ideas are the result of 111 days of work in Shenzhen China they’re working with manufacturers and fine tuning their business hoping to solve problems via hardware instead of software. Syrmo Nearly every company has released a wrist-bound tracker. And The Winner Of TechCrunch Disrupt NY 2014 Is… Vurb. It’s been a long, tough road, but it’s finally time to crown the winner of the Disrupt Battlefield. 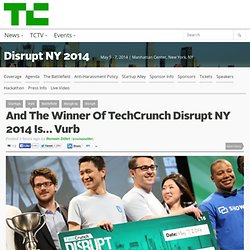 This year’s batch was truly awesome. Twenty-seven startups took the stage to present. The six finalists were Boomerang Commerce, ISI Technology, Mimi, Mink, ShowKit, and Vurb. It was an amazing batch with multiple hardware startups, innovative business models and good engineering. Wayra U.K. Adds Six More Startups To Its 2014 Mentoring Program. Back in January the Telefonica-backed accelerator Academy, Wayra U.K., announced the intake for its 2014 accelerator program – naming 13 startups that would be put through their paces during the nine-month mentoring program. 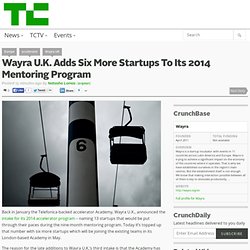 Today it’s topped up that number with six more startups which will be joining the existing teams in its London-based Academy in May. U.K. Startup SkillFlick Opens Its Doors As A Marketplace For Local Services — Starting In London. SkillFlick is a U.K. startup with the self-described aim of building an ‘Airbnb for local skills’. 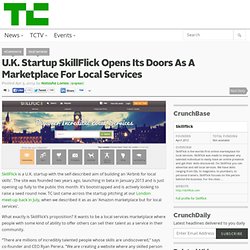 Mashable. The Launchpad is a series that introduces Mashable readers to compelling startups. 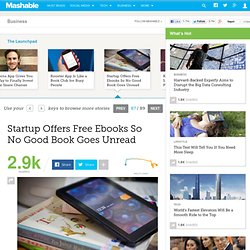 If you would like to have your startup considered for inclusion, please see the details here. Name: Screwpulp One-Liner Pitch: Screwpulp helps indie authors find an audience with pricing driven by demand. Why It's Taking Off: Readers can download free books in exchange for reviewing them, and as reviews and download rack up, book price increases translating into better earnings for writers. The music industry was democratized by YouTube and Soundcloud, news by Reddit and Twitter and many other categories by Kickstarter. Screwpulp launched last year to help independent authors get their books in front of readers and the site now has 70 books from 55 authors, and just raised its first round of funding. 10 Y Combinator Startups to Watch. Y Combinator is one of the best-known startup incubators in Silicon Valley. 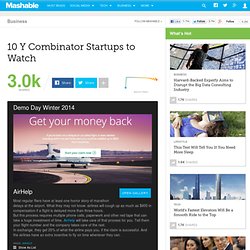 Since its launch in 2005, it has helped launch hundreds of startups, including Reddit, Scribd, Airbnb and Dropbox. Box Files For $250M IPO On Full-Year Revenue Of $124M, Net Loss Of $168M. The Box S-1 is out at last. The cloud storage company is looking to raise up $250 million in the flotation. Augmedix nabs $3.2M for a Google Glass app made just for doctors. How can big data and smart analytics tools ignite growth for your company? Find out at DataBeat, May 19-20 in San Francisco, from top data scientists, analysts, investors, and entrepreneurs.

Register now and save $200! Growth vs. Profit: What Should Rising Startups Focus On First? Startups to Watch at SXSWi 2014. 7 Early Stage Startups to Watch in 2014. 8 Emerging Tech Hubs You Should Pay Attention To. From Silicon Valley to Silicon Alley, and Berlin’s hip coffee shops to East London’s Silicon Roundabout, the world is well versed in the global innovation boom towns. 15 Early Stage Startups to Watch. 10 Startups to Watch in 2014. If you only focus on the multi-billion dollar valuations of young companies like Pinterest, Uber and Snapchat, you might assume 2013 has been a very good year for tech startups. How Israeli Companies Can Go From Starving Startup To Growing Company. Noam Fine, co-Founder and CEO of Widdit, providing app developers engagement solutions over the mobile and Web platforms. We read every day about new startups that have raised capital and have just recently launched their app or platform. App.net launches Backer, a service to help startups and developers crowdfund new features.

25 January '14, 09:48pm Follow App.net, the social platform by Dalten Caldwell has launched a new crowdfunding service called Backer that allows companies to ask users for money before committing to build software features. Winamp Acquired, Will Live to Play Another Song. 3 Pillars Of The New Business World: APIs, Identity, and Data.

How To Create A Minimum Viable Product. 5 Startups Improving Society Through Technology. Submit Your Startup - 32 Free Web Directories to Get You Users, Publicity and SEO. Going from $0 to $500k in 1 Year with no VC Money. User Experience Vision For Startups. The Age of the Female-Centric Startup. Crowdsource Original Music with AudioDraft. TxtRoo Launches A Yelp For The Feature Phone Market.

Related:  TechCrunch - The latest technology news and information on startups   -  Is This the Best Startup Launch Video Ever?   -  Education   -  Enterprise