Social Anxiety Support - Subliminal Binaural Beats Meditation For Social Phobia. Cognitive Distortions And Socializing. Many of the problems and conflicts people face are sustained in part by distorted, maladaptive thinking: Someone who's shy often sees other people as more critical and judgmental than they really are. 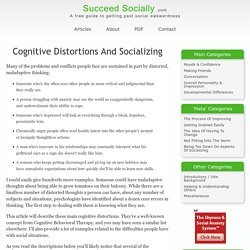 A person struggling with anxiety may see the world as exaggeratedly dangerous, and underestimate their ability to cope. Someone who's depressed will look at everything through a bleak, hopeless, pessimistic lens. Chronically angry people often read hostile intent into the other people's neutral or benignly thoughtless actions. Finding the cause of my anxiety. Glad to see you back, Juriaan. 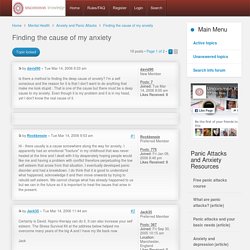 Pity you are still hysterically going on about your pet theory. There are all sorts of mentalistic theories explaining that anxiety attacks are caused by some cognitive processes in the mind that has its origin in our memory - presumably childhood experiences - hidden in the "subconscious mind" or to some other irrational attitudes or believes. Leaving aside the word 'mentalistic' which doesn't exist in the English language, it is surprising that so many anxiety sufferers conquer PAs using hypno-therapy, CBT and all the other methods addressed to the subconscious. Must be just a fluke that I, and many others I know of are now totally free of PAs, myself after nearly two years now using one of these 'mentalistic theories', namely alphadynamics.

These theories stem from an ingrained belief in the Western world of the superiority of the mind over the body, which may result in futile attempts to 'cure' anxiety attacks with 'mind games'. I wonder why? Nonsense. Fear of growing old. Anger Management Hotlines. Anger management hotlines offer support, information, and crisis intervention to anyone involved in an anger-related situation. 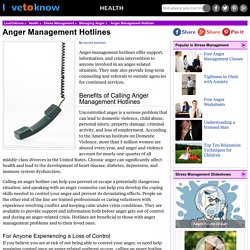 They may also provide long-term counseling and referrals to outside agencies for continued services. Benefits of Calling Anger Management Hotlines Uncontrolled anger is a serious problem that can lead to domestic violence, child abuse, personal injury, property damage, criminal activity, and loss of employment. According to the American Institute on Domestic Violence, more than 5 million women are abused every year, and anger and violence account for nearly one-quarter of all middle-class divorces in the United States. Chronic anger can significantly affect health and lead to the development of heart disease, diabetes, depression, and immune system dysfunction. For Anyone Experiencing a Loss of Control Before an anger-related situation develops: Anger management hotlines offer a different perspective on whatever situation is making you angry. For Victims of Anger. Depersonalization. Note: This article has introduced newcomers to Depersonalization for more than a decade. 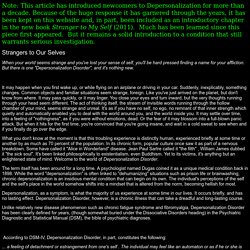 Because of the huge response it has garnered through the years, it has been kept on this website and, in part, been included as an introductory chapter in the new book Stranger to My Self (2011). Much has been learned since this piece first appeared. But it remains a solid introduction to a condition that still warrants serious investigation. Strangers to Our Selves When your world seems strange and you've lost your sense of self, you'll be hard pressed finding a name for your affliction. It may happen when you first wake up, or while flying on an airplane or driving in your car. What you don't know at the moment is that this troubling experience is distinctly human, experienced briefly at some time or another by as much as 70 percent of the population. The term itself has been around for a long time.

Depersonalization, as a symptom, is what the majority of us experience at some time in our lives. What if im already dead???? - Page 2 - Discussion - Depersonalization Community. 'Rogue Bullies', on 22 Jun 2010 - 11:56 PM, said: Haha me too. 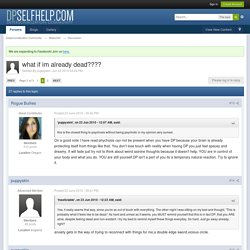 In a way we kind of are since we really don't know what else in the universe even exists. Thoughts like this really make me value the lesser creatures.I still have the thoughts, but I try not to obsess about them like I first did when I got DP. Well, I can go trough the day without thinking about this if I'm constantly distracted, but as soon as I have a single thought about it, I'm screwed.. instant panic And yeah, this has also made me feel horrible for the small insects and stuff, I used to crush them just because they looked weird as hell, now I just can't because hey I wouldn't like to be crushed by some giant lol But I'm quite sure I have these thoughts because it's all about trust or something, because when you're born, your parents tell you what to do and what not to, and you learn the rest from the rest, but seriously, everything we know until now we know it because people tell us, and who told them?

How to Stop Worrying: Self-Help for Anxiety Relief. 15 Things I Learned From My Nervous Breakdown (And How They Can Help You Start Living Your Best Life Now)  Qi Gong Relaxation & Healing - For Sleep & ASMR.