21 Truly Upsetting Vintage Recipes. Retro Housewife - 1950s Decade: Favorite And Family Approved Recipes From The 1950s. Retro recipes that we're happy to leave in the past. By Tamara Abraham for MailOnline Published: 22:06 GMT, 10 January 2014 | Updated: 00:32 GMT, 11 January 2014 Those under the age of 35 were most likely spared the worst of Fifties, Sixties and Seventies food trends. 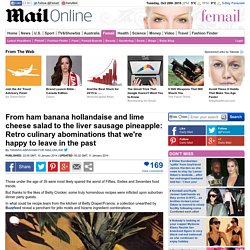 But thanks to the likes of Betty Crocker, some truly horrendous recipes were inflicted upon suburban dinner party guests. In what could be recipe tears from the kitchen of Betty Draper/Francis, a collection unearthed by Buzzfeed reveal a penchant for jello molds and bizarre ingredient combinations. Not what it seems: This 'Liver Sausage Pineapple' abomination thankfully doesn't contain pineapple - the spiky top is just for decoration, according to the 1953 Better Homes and Gardens New Cookbook. Retro 70s food is the new craze for 2013. Yes, according to online retailer Ocado, there has been a surge in sales of 70s foods, suggesting our penchant for the past is making its way beyond fashion and TV and onto the dinner table. 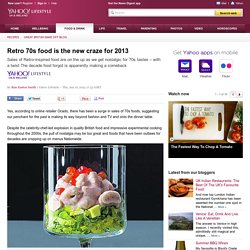 Despite the celebrity-chef-led explosion in quality British food and impressive experimental cooking throughout the 2000s, the pull of nostalgia may be too great and foods that have been outlaws for decades are cropping up on menus Nationwide. Heston's spin on the retro 70s prawn cocktail has seen ingredient sales soar by 90% The prawn cocktail (albeit with its 2012 Heston makeover) is leading the way, with sales of ingredients up by 95 per cent on last year. The rise and rise of retro food. There are no bigger trends in food this year than nostalgia and interactivity. 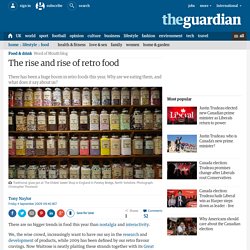 We, the wise crowd, increasingly want to have our say in the research and development of products, while 2009 has been defined by our retro flavour cravings. Now Waitrose is neatly plaiting these strands together with its Great Sweet Revival campaign. To promote its extraordinarily-named Monty Bojangles range of old fashioned sweets, Waitrose is asking customers to vote online for which "childhood favourites" it should revive: shrimps, barley sugars, sherbet lemons and the like. Am I the only one who finds this oddly depressing?

It's not that Waitrose refers to said sweets as "tuck shop favourites" that rankles (although, yes, if you went to a comprehensive, that does sound a bit sinister). First Wispa returned off the back of a Facebook campaign; then Wagon Wheels rolled back in their original wrappers. M&S brings back classic British food for retro Summer - Classic British recipes. Marks & Spencer’s new Summer food range is getting a thumbs up from us, as the brand brings back some quintessential British classics. 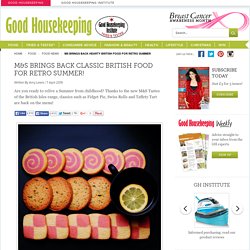 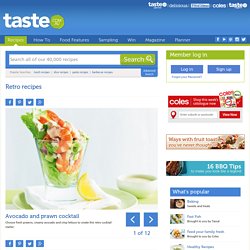 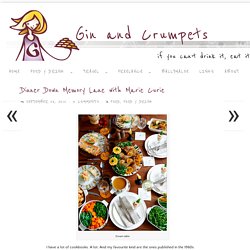 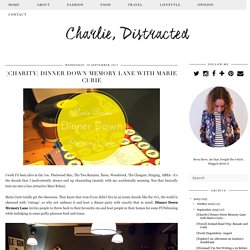 Fleetwood Mac, The Two Ronnies, flares, Woodstock, The Clangers, fringing, ABBA - it's the decade that I inadvertently always end up channeling (mainly with my accidentally morning 'fros that basically turn me into a less attractive Marc Bolan). Marie Curie totally get the obsession. A london life and style blog: food. Earlier in the week i mentioned a small jaunt down memory lane that i took recently. not my own memory lane, to be fair, but a memory lane i wish could have been mine, had i had the chance to live ~through the 70s, and not just be born a couple of years shy of them. there's something about lace dresses and crochet bags and flowers in the hair that really resonates (weird, i know) with me, and that's even before we stop to consider some of my favourite bands of all time had some of their greatest hits in the 70s (hello, fleetwood mac anyone). after a spot of mingling with the ladies behind the charity, it was time to take our seats for the first of many dated dishes (in a good way, of course) in our journey back in time, as well as some deeelicious and well-paired drinks to wash away the memories. 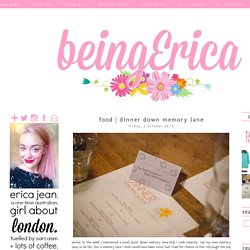 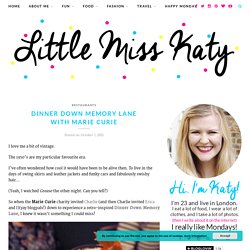 The 1950’s are my particular favourite era. I’ve often wondered how cool it would have been to be alive then. To live in the days of swing skirts and leather jackets and funky cars and fabulously swishy hair… (Yeah, I watched Grease the other night. Can you tell?) Dinner Down Memory Lane - Cherished By Me. As I write this I really cannot believe that in two weeks it will be the third anniversary of my mum’s death. 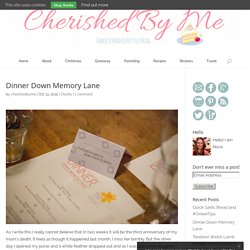 It feels as though it happened last month, I miss her terribly. But the other day I opened my purse and a white feather dropped out and as I was telling my daughter I saw another white feather on the floor… Retro dinner party ideas - Dinner Down Memory Lane. Tiger-prawns. Waitrose-prawns.jpg (JPEG Image, 750 × 440 pixels) Retro recipes and memorable menus.