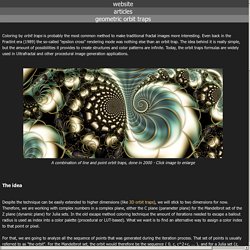 Even back in the Fractint era (1989) the so-called "epsilon cross" rendering mode was nothing else than an orbit trap. The idea behind it is really simple, but the amount of possibilities it provides to create structures and color patterns are infinite. Today, the orbit traps formulas are widely used in Ultrafractal and other procedural image generation applications. A combination of line and point orbit traps, done in 2000 - Click image to enlarge The idea Despite the technique can be easily extended to higher dimensions (like 3D orbit traps), we will stick to two dimensions for now. 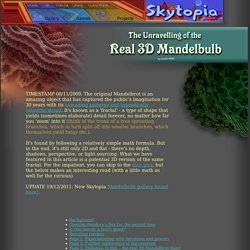 Around 20 years ago, along with other approaches, he first imagined the concept behind the potential 3D Mandelbulb (barring a small mistake in the formula, which nevertheless still can produce very interesting results - see later), and also wrote a short story about the 3D Mandelbrot in 1987 entitled "As Above, So Below" (also see his blog entry and notebook). Houdini vs Thinking Particles – Effective Technical Directors. Spiro Toy Asset. 80. Abstract FX - Simon Holmedal - Procedural in Motion. Creating abstract circle pattern. Sci Fi Abstract Animation - After Effects & Houdini Tutorial. VECTORS APPLIED: INTRODUCTION. In this tutorial I am going to try to explain how to use vectors in some specific cases, in this specific scenario we are going to make a basic splash setup that will allow you to create nice shapes with a high level of artistic control, although I have to warn you, my english is not that good, and this is my first tutorial in English, so please if you don't understand something please write in the comments. 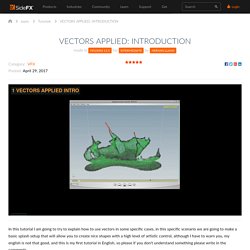 Connect Points and Lines in Houdini for an Abstract Animation - Lesterbanks. CG artist Tolya Shuverov, posts a look at how to turn a run cycle into an abstract animation, but connecting points and lines together in Side Effects Houdini. 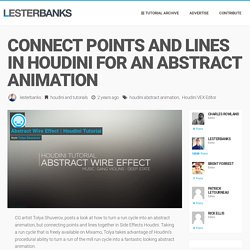 Taking a run cycle that is freely available on Mixamo, Tolya takes advantage of Houdini’s procedural ability to turn a run of the mill run cycle into a fantastic looking abstract animation. a simple abstract wire effect using Houdini 15 By contrast, you can see a similar effect being created with Autodesk Maya 2016 Extension 2 release, using the motion graphics toolkit, MASH. In Maya, the effect was created by using MASH to distribute objects along a mesh, and then creating a mesh from points. Houdini really lends itself well for creating abstract animation like this. Teun van der Zalm on Vimeo. Olodumare - Final Year Film - Final Year - VFX Project Threads - 3DHIT. For our final year film myself (Daniel Olabode), Henry Thein and Jonathan Evan Danette will be working on a short avant-garde,psychedelic film shot in first person called Olodumare. 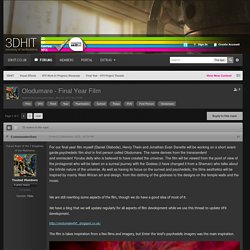 The name derives from the transcendent and omniscient Yoruba deity who is believed to have created the universe. The film will be viewed from the point of view of the protagonist who will be taken on a surreal journey with the Godess (I have changed it from a Shaman) who talks about the infinite nature of the universe.

As well as having its focus on the surreal and psychedelic, the films aesthetics will be inspired by mainly West African art and design, from the clothing of the godness to the designs on the temple walls and the music. We are still rewriting some aspects of the film, though we do have a good idea of most of it. We have a blog that we will update regularly for all aspects of film development while we use this thread to update VFX development. Galaxy. FX Thinking: How to create a Magnetic Vector Field in Houdini - Tutorial.

Building The Sun - Part 1. Building the Sun - Houdini tutorial preview. Houdini oil in water - deKO.LT. Marcel Christ Color Burst RnD. FX Tips and Tricks, with Andi Kadiu. CGSociety member and FX artist Andi Kadiu has sent us a couple examples of his awesome FX work, along with their breakdowns and a few tips for you. 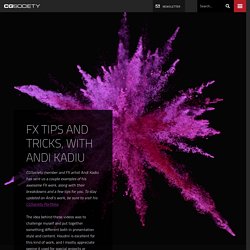 To stay updated on Andi's work, be sure to visit his CGSociety Portfolio. The idea behind these videos was to challenge myself and put together something different both in presentation style and content. Houdini is excellent for this kind of work, and I mostly appreciate seeing it used for special projects or simulations that do not fall into the usual everyday FX spectrum. I believe that's where the true power of the software lies, in its flexibility and adaptation with any kind of VFX project.

In the "Pyro | POP" Paint example I used 10 different Particle Sims to control the overall "star" shape. All final Renders are created from the same simulations; changing only colors, particle positions and scene lighting. Tips: 1. 2. Smoke and Pyro - cgwiki. The pyro solver isn't too scary once you understand it, and gets amazing results. 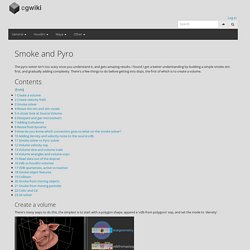 I found I got a better understanding by building a simple smoke sim first, and gradually adding complexity. There's a few things to do before getting into dops, the first of which is to create a volume. Create a volume There's many ways to do this, the simplest is to start with a polygon shape, append a 'vdb from polygons' sop, and set the mode to 'density'. Houdini pyro colored smoke mixing (setup included) Emit smoke color from a texture.