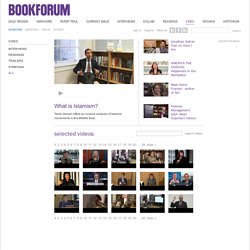 Featuring, from left to right, Paul Lisicky, Garth Greenwell, Brad Gooch, Darryl Pinckney, & Chris Bollen. With experience spanning across decades, genres and styles, each of these men has a unique and compelling perspective on gay life and its expression in literature. They’ll discuss the remarkable evolution of the LGBT community in literature with a special emphasis on the more recent and transformative decades in our nation.

Join us as each panelist gives us a taste of his most recent work and responds to each other’s readings, peeling layers back on topics of race, gender, art, history and literature. Is Putin about to face a ‘colored revolution’? Truck drivers and their supporters walk with symbolic wreaths, which they plan to place near an office of a new road payment system named Platon, in Khimki, outside Moscow on Dec. 13, 2015. 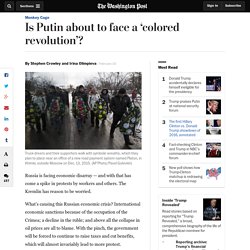 (AP Photo/Pavel Golovkin) Russia is facing economic disarray — and with that has come a spike in protests by workers and others. The Kremlin has reason to be worried. What’s causing this Russian economic crisis? International economic sanctions because of the occupation of the Crimea; a decline in the ruble; and above all the collapse in oil prices are all to blame. Is the Worst Still to Come With Vladimir Putin? Exiled journalist Masha Gessen sees an ominous return to totalitarianism in Russia—and a leader itching to re-instill mass terror in its people. 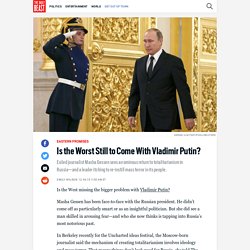 Is the West missing the bigger problem with Vladimir Putin? Masha Gessen has been face-to-face with the Russian president. He didn’t come off as particularly smart or as an insightful politician. But she did see a man skilled in arousing fear—and who she now thinks is tapping into Russia’s most notorious past. In Berkeley recently for the Uncharted ideas festival, the Moscow-born journalist said the mechanism of creating totalitarianism involves ideology and mass terror. New York Urban Landscape and Architecture Photography. The JPost. Savanna D'Amato – Profile – Medium.

Associated Press. The Strategic Consequences of Turkey’s Failed Coup by Sinan Ülgen. Global Terrorism Database. The updated GTD WebGL Globe is an interactive geographic visualization, currently in beta, that plots the location and frequency of yearly terrorist attacks worldwide from 1970-2014. 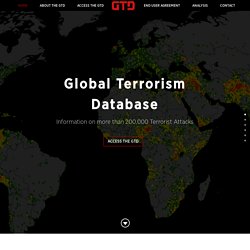 It was developed by START using the WebGL Globe open platform created by the Google Data Arts Team. Automated geocoding from the OpenCage Geocoder supplements the geocoding available in the public dataset. Periscopic, a data visualization firm that promotes information transparency and public awareness, has produced an innovative, interactive tool that allows users to explore the impact and dynamics of GTD perpetrator groups. Why AI's massive disruptions may be just what you're looking for. It's your nighttime routine: You drop your phone onto the nightstand charging pad, and it asks about your day. 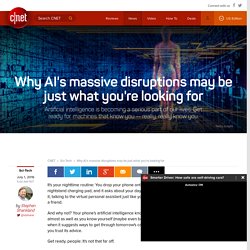 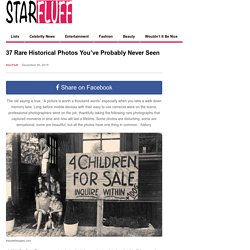 Long before mobile devices with their easy to use cameras were on the scene, professional photographers were on the job, thankfully taking the following rare photographs that captured moments in time and now will last a lifetime. Some photos are disturbing, some are sensational, some are beautiful, but all the photos have one thing in common…history. thepalettepages.com 1. Rachel Rose on Robert Irwin.

I know what works for me. BTAICBW: Archive. False memories arise because the brain codes similar ideas similarly. Recent advances in imaging have revealed that false memories can be held by the very same cells that hold accurate ones, but we don't have much information about how false memories get there in the first place. 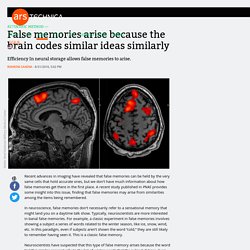 A recent study published in PNAS provides some insight into this issue, finding that false memories may arise from similarities among the items being remembered. In neuroscience, false memories don’t necessarily refer to a sensational memory that might land you on a daytime talk show. Typically, neuroscientists are more interested in banal false memories. For example, a classic experiment in false memories involves showing a subject a series of words related to the winter season, like ice, snow, wind, etc. 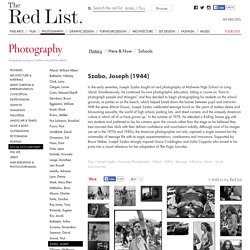 Simultaneously, he continued his own photographic education, taking a course on “how to photograph people and strangers” and thus decided to begin photographing his students on the school grounds, at parties or on the beach, which helped break down the barrier between pupil and instructor. With the series Almost Grown, Joseph Szabo celebrated teenage hood as ‘the years of restless desire and blossoming sexuality; the world of high school, parking lots, and street corners; and the uniquely American culture in which all of us have grown up.’ 1663?locale=en&_ga=1.93575960.485963593. Hiroyuki Nakada photographer.

The Surveillance Artist Turning Landscape Photography Inside Out. Artist Trevor Paglen’s C-print They Watch the Moon, 2010. 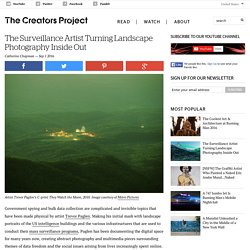 Image courtesy of Metro Pictures Government spying and bulk data collection are complicated and invisible topics that have been made physical by artist Trevor Paglen. Making his initial mark with landscape portraits of the US intelligence buildings and the various infrastructures that are used to conduct their mass surveillance programs, Paglen has been documenting the digital space for many years now, creating abstract photography and multimedia pieces surrounding themes of data freedom and the social issues arising from lives increasingly spent online.

“One of the things that I’m continuously interested in is the material bases for culture,” Paglen tells The Creators Project. Tecnos — 30/5 阿妹靠自己. Untitled: Archive. Free candid NSFW content from the web. Documenting Fashion. In 1863 Charles Baudelaire declared in the French newspaper Le Figaro: ‘Modernity is transitory, fleeting, contingent’. 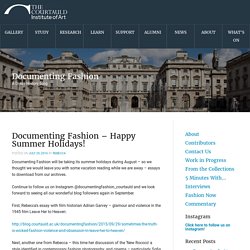 He instructed contemporary artists not to ‘scorn or forgo this transitory, fleeting element that undergoes such frequent metamorphoses. By removing it, you lapse into the void of an abstract, indefinable beauty.’ The Impressionists wanted to capture the beauty and excitement of modern life in and around Paris, the capital of modernity, prior to and following the fall of the Second Empire in 1870. Their lively brushstrokes sought to animate the ephemeral and transitory qualities of Parisian modernity, as described by Baudelaire, and its recently established commodity culture, which was shaped by the imperatives of fashion, consumerism and incessant innovation.

The Surveillance Artist Turning Landscape Photography Inside Out. Artist Trevor Paglen’s C-print They Watch the Moon, 2010. Image courtesy of Metro Pictures Government spying and bulk data collection are complicated and invisible topics that have been made physical by artist Trevor Paglen. Making his initial mark with landscape portraits of the US intelligence buildings and the various infrastructures that are used to conduct their mass surveillance programs, Paglen has been documenting the digital space for many years now, creating abstract photography and multimedia pieces surrounding themes of data freedom and the social issues arising from lives increasingly spent online.

“One of the things that I’m continuously interested in is the material bases for culture,” Paglen tells The Creators Project. “The internet, for example, is a thing that we think about in a very mystifying way. The Psychedelic Animations of Vince Collins Stand the Test of Time. Euphoria (1975) This article was originally published on June 30, 2013 but we think it still rocks!

If imaginations could exist within other imaginations, a la Russian doll sets, Vince Collins would have no reason to create films. Marina abramovic at DuckDuckGo. Untitled — stoned420raider: candidjbteenlover3: Sexy □□□... Pornfidelity at DuckDuckGo. Sexualsensualmenagerie: Archive. Edward Snowden’s Long, Strange Journey to Hollywood. I first spoke to Stone in June 2015, after reading that he was in the midst of shooting a film based on Kucherena’s novel. He said he would be traveling to Moscow again that week to shoot Snowden and agreed to let me tag along. A day later, a peeved Borman called me. “You’ve been disinvited,” he said coolly. Dark hair light eyed girls are like unicorns. Diaper school: 26 thousand results found on Yandex.Images. Wilson Lee (@leemaishun) Spring Break forever. Liv.tyler. Creeper's Delight. MEL Magazine. Des combattants entraînés par les USA forment le noyau de Daech. Metaphysics special: Do we have free will?

By Michael Brooks “DID I really just decide to have fish and chips for lunch?” Humans have been wrestling with such questions for millennia. Eighty Years of James Agee - Los Angeles Review of Books. PER CUSTOM, BILL O’REILLY opened the July 12 installment of his show on Fox News with the warning that viewers were about to enter a “No Spin Zone.” The focus of that night’s program was the question of whether, as Donald Trump put it in a subsequent interview, “we have a divider as president.” A few nights earlier, O’Reilly had cited a Pew poll in support of the assertion that “the political divide in America is getting worse, with some folks descending into rank hatred,” and now, as evidence that President Obama indeed bore the ultimate responsibility for this development, he presented a brief clip in which Matt Finn, a Fox News correspondent who had been sent to a Black Lives Matter rally in St.

Paul with no other agenda, O’Reilly would have us believe, than to report the protesters’ point of view, was “besieged” by a cursing mob. Eighty years ago this summer, James Agee wrote to his longtime friend and former grade school teacher, Father James Harold Flye of St. Magazines. Changing a shapeshifter midstream (On the end of Socialism and/or Barbarism) Blogs. Magazines.