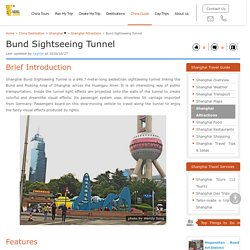 It is an interesting way of public transportation. Inside the tunnel light effects are projected onto the walls of the tunnel to create colorful and dreamlike visual effects. Its passenger system uses driverless SK carriage imported from Germany. Passengers board on this slow-moving vehicle to travel along the tunnel to enjoy the fancy visual effects produced by lights.

Features Shanghai Bund Sightseeing Tunnel is a symbolic sightseeing project combining transportation with tourism. Location. Facts About Tunnels: Types and Uses - Easy Science For Kids. Have you ever gone through a very long tunnel like the Eisenhower Tunnel in the Rocky Mountains? 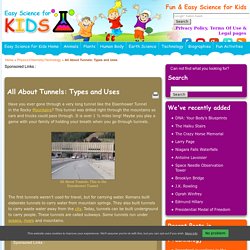 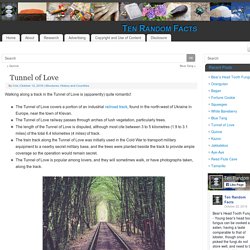 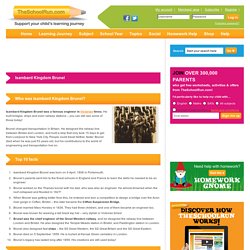 His father was from France, and sent Brunel there to learn more about maths and engineering. Brunel came back to London in 1822 and worked with his dad. The first thing Brunel and his dad did together was work on the Thames tunnel, which is 396 metres long and allowed people to travel underneath the River Thames. This was very dangerous, and while it was being built, the tunnel flooded a few times. Brunel almost drowned, and had to rest for a while after that while he got better.

In 1833, Brunel was appointed chief engineer of the Great Western Railway – he designed the railway line that runs between Bristol and London, which was a major achievement. Brunel was interested in sea travel, too – each ship he designed was bigger and better than the last. Florence Nightingale wrote a letter about how difficult conditions were for doctors and nurses helping wounded soldiers during the Crimean war. 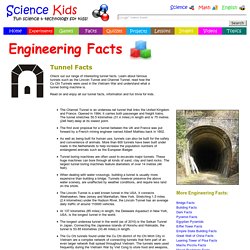 Opened in 1994, it carries both passenger and freight trains. The tunnel stretches 50.5 kilometres (31.4 miles) in length and is 75 metres (246 feet) deep at its lowest point. The first ever proposal for a tunnel between the UK and France was put forward by a French mining engineer named Albert Mathieu back in 1802. As well as being built for human use, tunnels can also be built for the safety and convenience of animals. More than 600 tunnels have been built under roads in the Netherlands to help increase the population numbers of endangered animals such as the European Badger. 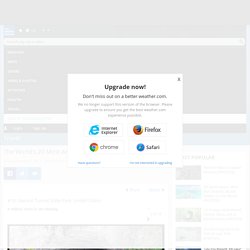 " It's not hard to see why when you get a look at this 850-ft. -long by 100-ft. -high tunnel, which appears at first as if it were carved by human hands. Now part of a 950-acre state park tucked into Virginia's southwest corner, the Natural Tunnel is thought to have begun forming during a glacial period more than a million years ago. Railroad tracks were laid down inside the tunnel near the end of the 19th century and passenger service began in 1890, continuing through the 1930s with the then-famous "Lonesome Pine Special. " (MORE: Discover the "eighth wonder of the world" in Virginia and save up to 20%)