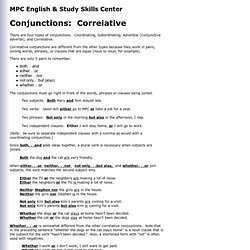 Correlative conjunctions are different from the other types because they work in pairs, joining words, phrases, or clauses that are equal (noun to noun, for example). There are only 5 pairs to remember: both. . .and either. . .or neither. . .nor not only. . .but (also) whether. . .or The conjunctions must go right in front of the words, phrases or clauses being joined.

Two subjects: Both Mary and Tom stayed late. Two verbs: Jason will either go to MPC or take a job for a year. Two phrases: Not only in the morning but also in the afternoon, I nap. (Note: be sure to separate independent clauses with a comma as would with a coordinating conjunction.) Either/or plural or singular verb? Neither nor, Either or, and not only..but also - UsingEnglish.com ESL Forum. Neither-nor: Correlative Conjunctions « Writing Tips. Over 30 years ago, I had a British boyfriend named Philip. 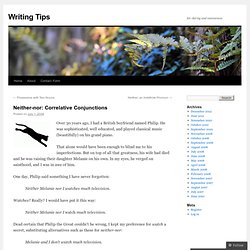 He was sophisticated, well educated, and played classical music (beautifully) on his grand piano. That alone would have been enough to blind me to his imperfections. But on top of all that greatness, his wife had died and he was raising their daughter Melanie on his own. In my eyes, he verged on sainthood, and I was in awe of him. One day, Philip said something I have never forgotten: Neither Melanie nor I watches much television. Watches? Neither Melanie nor I watch much television. Dead certain that Philip the Great couldn’t be wrong, I kept my preference for watch a secret, substituting alternatives such as these for neither-nor: Melanie and I don’t watch much television.

The Correlative Conjunction. Grammar Mishaps: Neither-Nor vs. Either-Or. What is the difference between "neither-nor" and "either-or"? 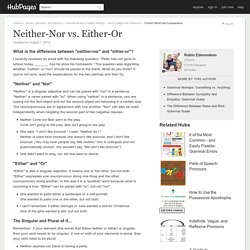 I recently received an email with the following question: "Peter has not gone to school today, _______ has he done his homework.” The question was regarding whether "neither" or "nor" should be placed in the blank. What do you think? If you're not sure, read the explanations for the two pairings and then try. "Neither" and "Nor" "Neither" is a singular adjective and can be paired with "nor" in a sentence. 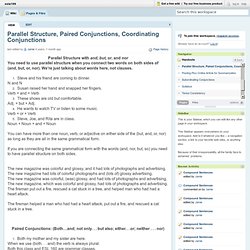 We’re just talking about words here, not clauses. Steve and his friend are coming to dinner. N and N Susan raised her hand and snapped her fingers. Verb + and + Verb These shoes are old but comfortable. Adj. + but + Adj. He wants to watch TV or listen to some music. Verb + or + Verb Steve, Joe, and Rita are in class. Noun + Noun + and + Noun You can have more than one noun, verb, or adjective on either side of the (but, and, or, nor) as long as they are all in the same grammatical form. If you are connecting the same grammatical form with the words (and, nor, but, so) you need to have parallel structure on both sides. 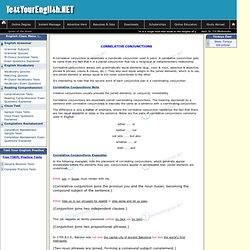