Common Core in Action: 10 Visual Literacy Strategies. Do you wish your students could better understand and critique the images that saturate their waking life? 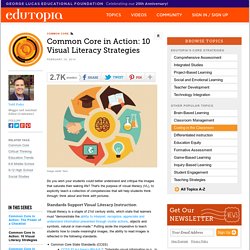 That's the purpose of visual literacy (VL), to explicitly teach a collection of competencies that will help students think through, think about and think with pictures. Standards Support Visual Literacy Instruction Visual literacy is a staple of 21st century skills, which state that learners must "demonstrate the ability to interpret, recognize, appreciate and understand information presented through visible actions, objects and symbols, natural or man-made. " Putting aside the imperative to teach students how to create meaningful images, the ability to read images is reflected in the following standards. Common Core State Standards (CCSS) CCSS.ELA-Literacy.RH.6-8.7: "Integrate visual information (e.g., in charts, graphs, photographs, videos or maps) with other information in print and digital texts. " How to Teach Visual Literacy: Visual Thinking Routines Think-Alouds Asking the 4WS.

The 20 countries with the smartest high school kids. The world’s top high school students are outside of the United States. 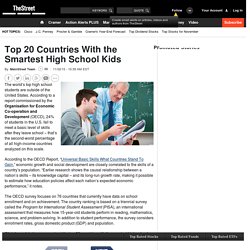 According to a report commissioned by the Organisation for Economic Co-operation and Development (OECD), 24% of students in the U.S. fail to meet a basic level of skills after they leave school – that’s the second-worst percentage of all high-income countries analyzed on this scale. According to the OECD Report, “Universal Basic Skills What Countries Stand To Gain,” economic growth and social development are closely correlated to the skills of a country’s population. “Earlier research shows the causal relationship between a nation’s skills – its knowledge capital – and its long-run growth rate, making it possible to estimate how education policies affect each nation’s expected economic performance,” it notes. The OECD survey focuses on 76 countries that currently have data on school enrollment and on achievement. Click through to learn more about the top 20 countries with the smartest high school kids. The right — and surprisingly wrong — ways to get kids to sit still in class. 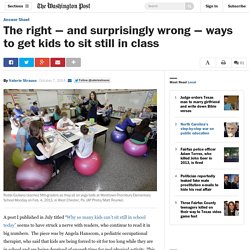 (AP Photo/Matt Rourke) A post I published in July titled “Why so many kids can’t sit still in school today” seems to have struck a nerve with readers, who continue to read it in big numbers. The piece was by Angela Hanscom, a pediatric occupational therapist, who said that kids are being forced to sit for too long while they are in school and are being deprived of enough time for real physical activity. This, she said, is affecting their ability to learn and in some cases leading to improper ADHD diagnoses. Why so many kids can’t sit still in school today. The Centers for Disease Control tells us that in recent years there has been a jump in the percentage of young people diagnosed with Attention Deficit and Hyperactivity Disorder, commonly known as ADHD: 7.8 percent in 2003 to 9.5 percent in 2007 and to 11 percent in 2011. 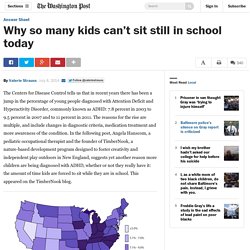 The reasons for the rise are multiple, and include changes in diagnostic criteria, medication treatment and more awareness of the condition. In the following post, Angela Hanscom, a pediatric occupational therapist and the founder of TimberNook, a nature-based development program designed to foster creativity and independent play outdoors in New England, suggests yet another reason more children are being diagnosed with ADHD, whether or not they really have it: the amount of time kids are forced to sit while they are in school.