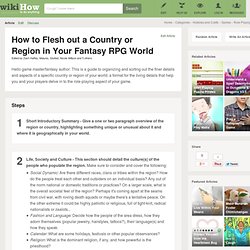 This is a guide to organizing and sorting out the finer details and aspects of a specific country or region of your world: a format for the living details that help you and your players delve in to the role-playing aspect of your game. Ad Steps 1Short Introductory Summary - Give a one or two paragraph overview of the region or country, highlighting something unique or unusual about it and where it is geographically in your world.Ad 2Life, Society and Culture - This section should detail the culture(s) of the people who populate the region. Tips And for other topics, your providing these details will inspire ideas for larger, overarching plot-lines and the workings of still other regions of your land. Old Man Henderson - 1d4chan. Crazy-ass tale about someone who figured out how to win at Call of Cthulhu (only it was really Trail of Cthulhu). 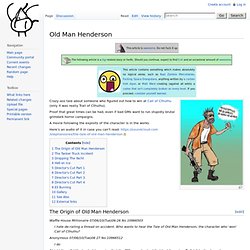 Proof that great times can be had, even if bad GMs want to run stupidly brutal grimdark horror campaigns. A movie following the exploits of the character is in the works. Here's an audio of it in case you can't read: [edit] The Origin of Old Man Henderson Waffle House Millionaire 07/06/10(Tue)06:26 No 10966503 I hate de-railing a thread on accident. Anonymous 07/06/10(Tue)06 27 No.10966512 I do Alright then, I'd like to start by saying that the GM was a bastard that had it coming. Old Man Henderson was already a little crazy, and blamed his life's misfortunes on Vietnam. Old Man Henderson wore combat boots, cargo shorts, and an open-front Hawaiian shirt with a wife-beater underneath. Online Die Roller. 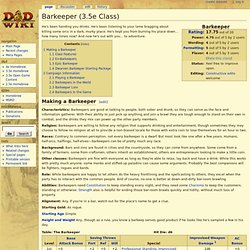 He's been listening to your lame bragging about killing some orcs in a dark, murky place. He's kept you from burning his place down... how many times now? And now he's out with you... to adventure. Characteristics: Barkeepers are good at talking to people, both sober and drunk, so they can serve as the face and information gatherer. With their ability to just pick up anything and join a brawl they are tough enough to stand on their own in combat, and the drinks they mix can power up the other party members. Religion: Barkeepers are willing to follow any religion that supports drinking and entertainment, though sometimes they may choose to follow no religion at all to provide a non-biased locale for those with extra coin to lose themselves for an hour or two. Races: Contrary to common perception, not every barkeeper is a dwarf.

Background: Bars and inns are found in cities and the countryside, so they can come from anywhere. Alignment: Any. RPG Fonts: A Quick Primer for Old School Gaming - The Entertainment eZine. Second Zen Moment: Player Skill, not Character Abilities Original D&D and Swords & Wizardry are games of skill in a few areas where modern games just rely on the character sheet. 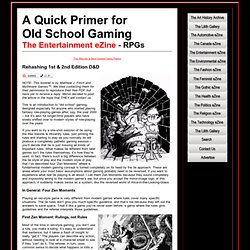 You don’t have a “spot” check to let you notice hidden traps and levers, you don’t have a “bluff” check to let you automatically fool a suspicious city guardsman, and you don’t have a “sense motive” check to tell you when someone’s lying to your character. You have to tell the referee where you’re looking for traps and what buttons you’re pushing. You have to tell the referee whatever tall tale you’re trying to get the city guardsman to believe. You have to decide for yourself if someone’s lying to your character or telling the truth. Also: these games aren’t simulations of what a dwarf raised in a particular society, and having a particular level of intelligence, would do when faced with certain challenges. Know when to run. Third Zen Moment: Heroic, not Superhero. Killyouwithmybrain.jpg (JPEG Image, 750 × 600 pixels) Dungeon Mastering Advice.

Evil GM Trick #28: Sure You Can Have That +12 Hackmaster. If there's one immutable law all GMs know, it’s that players love loot. 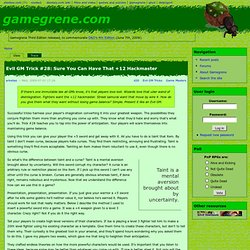 Wizards love that uber wand of disintegration. Fighters want the +12 hackmaster. Street samurai want that move by wire 4. How do you give them what they want without losing game balance? Simple. Successful tricks harness your player's imagination converting it into your greatest weapon. Using this trick you can give your player the +5 sword and get away with it. Taint is a mental aversion brought about by uncertainty. So what's the difference between taint and a curse? Presentation, presentation, presentation. Tell your players to create high-level versions of their characters.

They crafted endless theories on how the more powerful characters would be used. Now you need to craft your adventure. Through some investigation they learned that the temple was run by a necromancer bent on raising an army of undead. After several battles the party freed the goblins who revealed the temple's location deep within the mine. RPG File Archive. 5iN's Blog, I heard this at Encounters tonight when our DM had... Dungeon Generator for D&D.

Related:  Random Name Generator   -  How to Flesh out a Country or Region in Your Fantasy RPG World   -  Education   -  Enterprise