Video games will become a $99.6B industry this year as mobile overtakes consoles and PCs. Gaming is taking over the world. 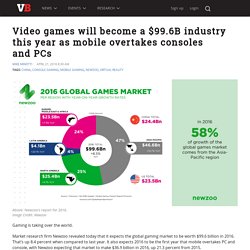 Market research firm Newzoo revealed today that it expects the global gaming market to be worth $99.6 billion in 2016. That’s up 8.4 percent when compared to last year. It also expects 2016 to be the first year that mobile overtakes PC and console, with Newzoo expecting that market to make $36.9 billion in 2016, up 21.3 percent from 2015. Forty-seven percent of that $99.6 billion will come from Asia, as you can see in the chart below.

China is seeing exceptional growth. “China will remain the largest games market for the foreseeable future, growing to $28.9 billion by 2019,” Newzoo notes. Above: Newzoo’s outlook on China. Image Credit: Newzoo Newzoo also expects revenues from virtual reality to be marginal this year. “As the uptake of VR hardware plays out, game software revenues will automatically be absorbed into current PC, TV/console and mobile revenues,” Newzoo notes. Video Game Industry - Statistics & Facts. A video game is an electronic game that can be played on a computing device, such as a personal computer, gaming console or mobile phone. 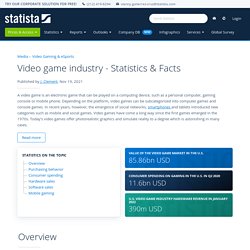 Depending on the platform, video games can be subcategorized into computer games and console games. In recent years however, the emergence of social networks, smartphones and tablets introduced new categories such as mobile and social games. Video games have come a long way since the first games emerged in the 1970s. Today’s video games offer photorealistic graphics and simulate reality to a degree which is astonishing in many cases. Video games are a billion-dollar business and have been for many years. There are three major players in the market for video game consoles: Sony, Microsoft, and Nintendo. 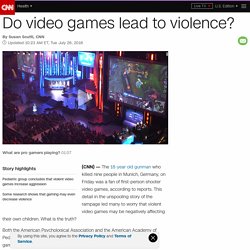 The psychological group reports that more than 90% of children in the United States play video games. Among kids between the ages of 12 and 17, the number rises to 97%. More important, 85% or more of video games on the market contain some form of violence. The titles seem to say it all: "Manhunt," "Thrill Kill," "Gears of War" and "Mortal Kombat. " However, even the seemingly benign "Pokemon Go" requires players to go to battle. The American Psychological Association observed in an August 2015 policy statement (PDF) that research demonstrated a link "between violent video game use and both increases in aggressive behavior ... and decreases in prosocial behavior, empathy, and moral engagement. 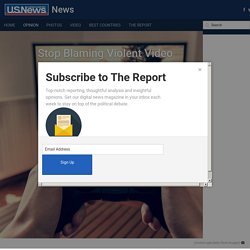 The latest to raise this specter was German Interior Minister Thomas de Maizière, who claimed that violent video games "helped inspire" the attack. This episode follows a fairly familiar pattern: A politician or police officer discovers that the young male perpetrator of a horrible crime also happened to play violent video games (as almost all young males do), and links the two in a public statement. News media decides to treat clueless speculation as something near to fact, and the next turn of the violent video game moral panic is on. In truth, there's no evidence to connect violent video games to violence in society. Several studies, such as by psychologist Patrick Markey and economist Scott Cunningham, have linked the release of popular violent video games with immediate declines in societal violence.

Study: No Psychological Harm to Children Who Play Lots of Video Games. This is the kind of research every kid trying to convince his parents to let him play video games dreams about: "Time spent playing video games may have positive effects on young children. 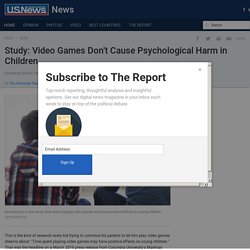 " That was the headline on a March 2016 press release from Columbia University's Mailman School of Public Health, promoting a new study co-authored by three members of its faculty. I looked at the study, published in the journal Social Psychiatry and Psychiatric Epidemiology, and while it runs counter to parental common sense, it's not bonkers. Its team of 13 researchers analyzed the video game-playing habits of more than 3,000 children, aged 6 to 11, across Europe back in 2010.

They found that children who played at least five hours a week had fewer psychological problems than students who didn't play video games as much, and were rated by their teachers as better students, both academically and in social adjustment. "I think what we're seeing here is the evolution of gaming in modern society.